The WWE Halloween Havoc event features six matches with three titles on the line including a Ladder, Weapons Wild and Spin the Wheel, Make The Deal match as well.

I think it’s a pretty good card with matches that have been built up well. I saw Shawn Michaels say on a conference call today that he considers this to be NXT’s biggest event of the year along with Stand & Deliver during WrestleMania weekend, so I think they’re going to treat this like a big deal and hopefully have some memorable moments. In terms of match quality, I like a lot about the card because everything has been built up well.

It was also confirmed by Michaels that December 10th is the next Premium Live Event called Deadline. Frankly, I still wish they were using the “Takeover” name for these shows, but it’s pretty much the same thing.

Shotzi and Quincy Elliott will be the hosts of the show. They should be part of some funny segments. Quincy is a unique guy while Shotzi is very likable as a face. The images below come from WWE.com as usual. 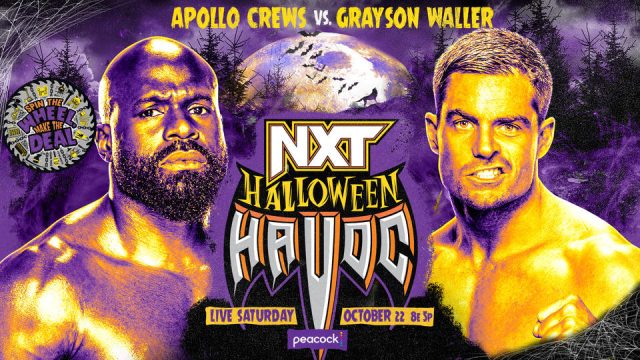 The story here is that Waller did multiple eye pokes on Crews to beat him, so Crews has sought revenge by damaging Waller’s eyes as well. Plus, Crews has this weird character where he can see into the future and we get to see his “visions” on the show. It’s pretty dumb, but I think they should have a good match here. Since Waller won their last match, I’m picking Crews to win this battle between two talented athletes. If they get 10-15 minutes and open the show they could have one of the best matches of the night. 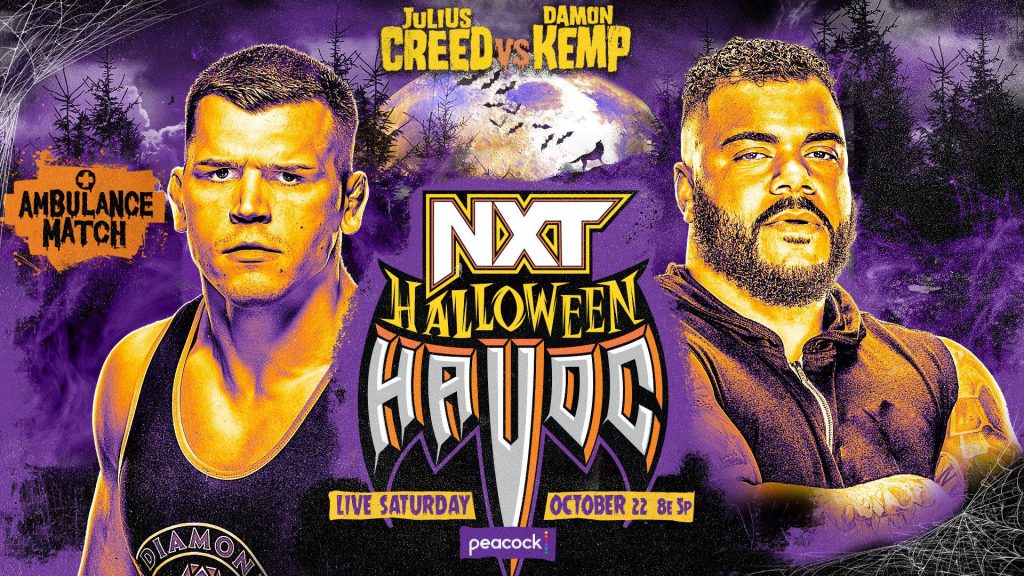 (If Julius loses, Brutus Creed will have to leave NXT.)

This could be good, but it’s a tough match to have. It’s important to remember when it comes to NXT shows, a lot of the talent likely works out together in the ring a lot, so they should have pretty good chemistry and possibly practiced some of the spots they are going to do. The NXT Arena (WWE Performance Center) isn’t that big, but they should have enough room to brawl outside the ring.

If they didn’t have the stipulation then I might have picked Kemp. However, it doesn’t make sense to break up the Creed Brothers like that unless they do something like Brutus is forced to leave and Julius willingly leaves so then they become a team on the main roster. I don’t know where it’s going. It will be interesting to see if Damon’s brother Gable Steveson shows up since they did reference him (without saying his name) last week on NXT and Gable is training in Orlando, so perhaps he could show up. I’m going with Julius for the win with Roderick Strong making his return to get revenge against Kemp for the cheap attack in the parking lot to set up Kemp’s heel turn. It just makes sense for Julius to win in the story they are telling. 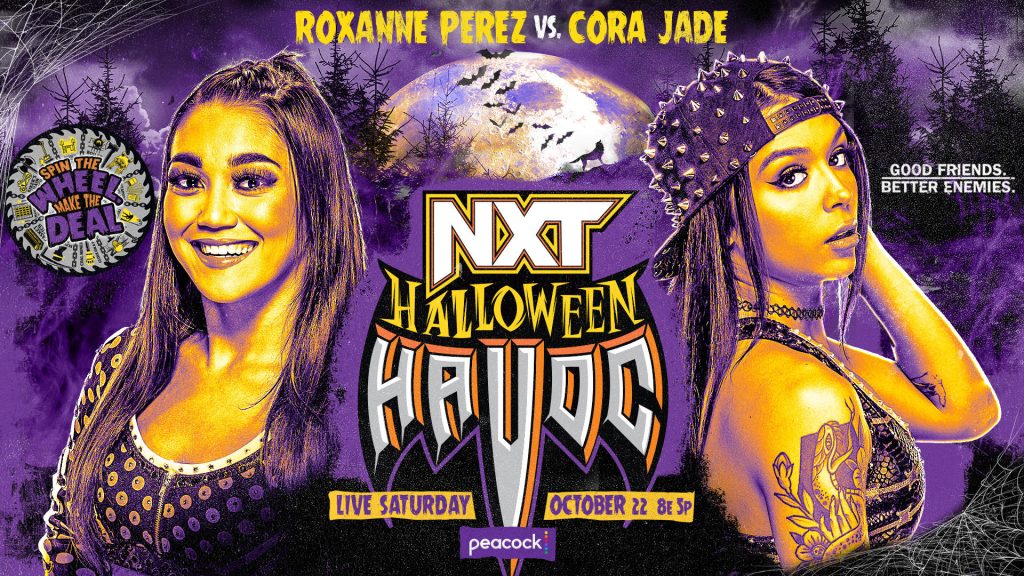 It’s another match on this show that is a rematch. The last time they wrestled, Jade got the win with the story that Perez was hesitant to attack her former friend when she had the chance to do it. This time, they can legally use weapons in the match, so I think that sets the stage for Perez to overcome her hesitancy in the past and use those weapons to beat up Jade enough that Perez gets the pinfall win. These are two names to watch because they are both 21 years old (Roxanne’s birthday turning 21 is soon) this year and going to be two women that NXT is going to build around in the coming year. I think they’ll both have really good careers on the main roster as well. This could be one of the better matches of the night if they really come up with some creative spots. 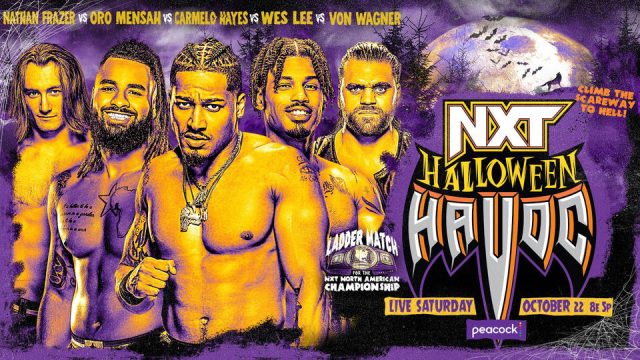 The title is vacated because Solo Sikoa won it from Carmelo Hayes and then Shawn Michaels made Solo drop it due to Solo being on the main roster now. I’m a bit surprised that they made it a five-man ladder match instead of six-man. If you have six guys then at least they can pair up a bit and do some spots together, but when it’s five guys that makes it a bit more difficult. Anyway, I’m sure it will be a well-constructed match.

Lee and Mensah feel like two guys in the match that are there to do some spectacular high spots whether it’s off the ladder or some other object. If Lee won then it would be a fun story because he’s a likable, btu I think they could do more to build him up for something like that.

I think Wagner or Frazer is going to win. It’s nothing against Hayes, but I feel like he should move on past this title since he’s been a part of the North American Title picture for the past year. Hayes should probably be in the main event of the NXT Deadline show in December going after the NXT Title. Frazer is the more exciting guy for sure. Wagner is boring a lot of the time. However, I think WWE has high hopes for the big guy Wagner and I can see him picking up the win here as the biggest match in the match.

This should be really good because of how talented Hayes, Lee, Frazer and Mensah are in terms of their high-flying talent. Wagner is much bigger than them, so he can do a lot of power moves and look impressive. I’m going with Wagner for the win. I’d call this the hardest match on the show in terms of picking a winner. 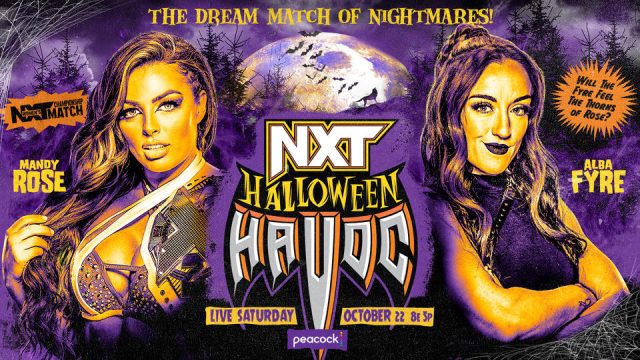 My personal favorite Mandy Rose defending the title she won one year against Alba Fyre. Mandy won the title on October 26, 2021 from Raquel Gonzalez (now Rodriguez), so we are a few days shy of one year for Mandy as the champion. While I think that Rose could certainly lose the title at any time, this just doesn’t feel like the right time to me. The feud has been hurt by Mandy missing a few weeks because one of her brothers passed away, which is an awful thing obviously and I’m glad she had time to mourn with her family. As I wrote in my NXT review earlier in the week, the story that Fyre “abducted” Rose was really lame, but they had to come up with something to explain Rose being off for a few weeks. I just think they could have said she was on vacation or had some injury or something a lot easier.

I feel like Rose is going to retain. I still feel like there should be a better, more long-term story for a challenger. In this case, they just had Fyre target Rose over the last month. They could have done a better job of having a challenger that earns the title shot by winning a match or a few matches. It just doesn’t feel like the right time for Rose to lose unless there’s a plan to move her and Toxic Attractions to Raw or Smackdown, which is certainly possible. I’m going with Rose here although there is certainly a chance that she might lose. 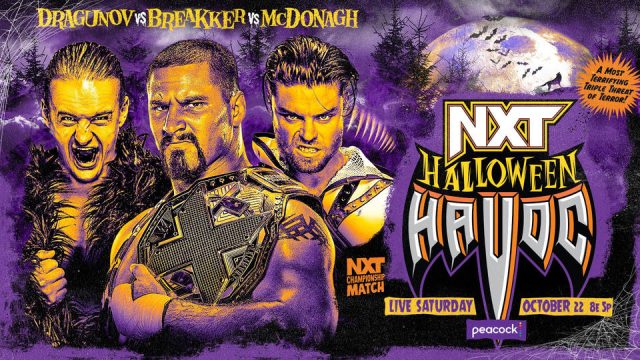 The main event could certainly be the match of the night because there’s an interesting mix of talent here. I like how Dragunov pointed out in the promo to build the match that Breakker lost the NXT Title (to Dolph Ziggler) in a triple threat match earlier this year, so it could happen again. That’s not my prediction, though. I’m picking Breakker to win by pinning McDonagh, who has already lost to break in a singles match in the past.

This match would have been better if it was just Breakker vs. Dragunov, who is one of my favorite wrestlers in NXT. The key to Dragunov is that he sells everything well and his offense is very believable. I don’t think Dragunov is capable of having a bad match. Hopefully do Bron vs. Ilja in a singles match in the coming weeks, which can happen because if Bron pins JD like I predict then Dragunov can easily say he wasn’t beaten, so he wants a singles match.

I think the main event of NXT Deadline on December 10 should be Bron Breakker vs. Carmelo Hayes. They have been kept apart for the last year, so I think we could see it there. After that, one or both of them are going to the main roster perhaps for the Royal Rumble. I guess that’s a bonus prediction on my part. Anyway, Breakker should retain here in what will a competitive, fun match for about 20 minutes.

Apollo Crews vs. Grayson Waller. It should be fine as a match, but I think the “damaged eye” story along with Apollo’s vision gimmick to be a bit silly.

Bron Breakker vs. Ilja Dragunov vs. JD McDonagh in about 20 minutes.

Mandy Rose vs. Alba Fyre in about 10 minutes.

It’s around a 7.25 for this show. I think the matches have been built up well. There should be some new stories coming after the show because I think there are a few feud-ending matches at Halloween Havoc. I was critical of the build to the Women’s Title match because it could have been better although a real-life excuse did get in the way. The Ladder Match interests me the most because of its unpredictable nature and some talented high fliers in there.

I’m hoping that there will be a surprise or two as well. I think if they just do a regular show with these matches, it will be fine, but I want NXT to do something special to get people more interested in the product. Surprises are a good thing.

I will write a live review of Halloween Havoc on TJRWrestling on Saturday night, so join me for that during the show or after it’s over.