Clash at the Castle represented WWE’s first trip to the United Kingdom for a Pay Per View (or Premium Live Event) since SummerSlam 1992.

It also represented Triple H’s first actual PLE since taking over as Head of Creative. I know some will say SummerSlam but he was still booking that show largely off of what Vince McMahon already had in place. Clash was a great show taking place in front over 62,000 fans at Principality Stadium in Cardiff, Wales. It was probably one of the greatest “wrestling” PLE’s in years for WWE, so I can see why my buddy John Canton praised it in his review as the best WWE PLE this year. There were quite a few notable things happened so let’s get into it. 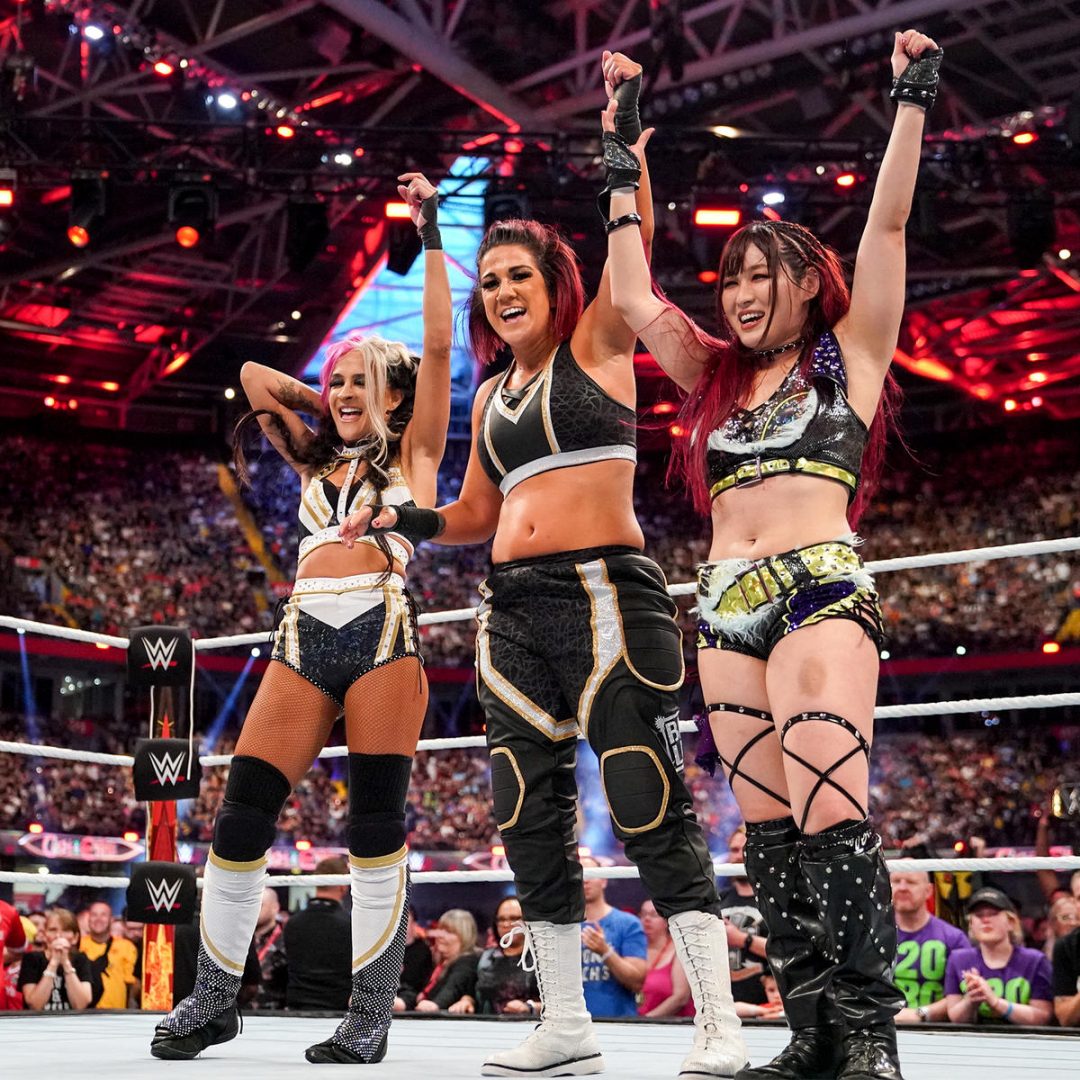 Damage Control officially got its name and theme music on this show which wasn’t as bad as some of WWE’s updated theme music choices have been. This was Bayley’s first PLE in over a year and the first one in front of fans since before the pandemic. You could tell the crowd loved her with the “Hey Bayley” song. She tried to stay heel but you could tell she was loving it. The match was better than I expected it to be. Although, the winner was easy for me to see once Dakota Kai and IYO SKY lost the Women’s Tag Team Title match last week.

A little over a month ago, Dakota Kai was contemplating retirement, we all thought Iyo was headed back to Japan, and had no idea when Bayley was coming back. Here we are a month later and all three were wrestling in front of 62,000 people. They eventually triple teamed Bianca and hit all their finishes, ending in an Iyo Sky moonsault to allow Bayley to pick up the pinfall win. What’s significant about that is that it is Bianca’s first pinfall loss on television in 2022. That is how you build a talent. We are in September and Bianca Belair suffered her first televised pinfall loss of the year. It also builds Bayley as an instant contender for a Raw Women’s Title shot, possibly next month at Extreme Rules. 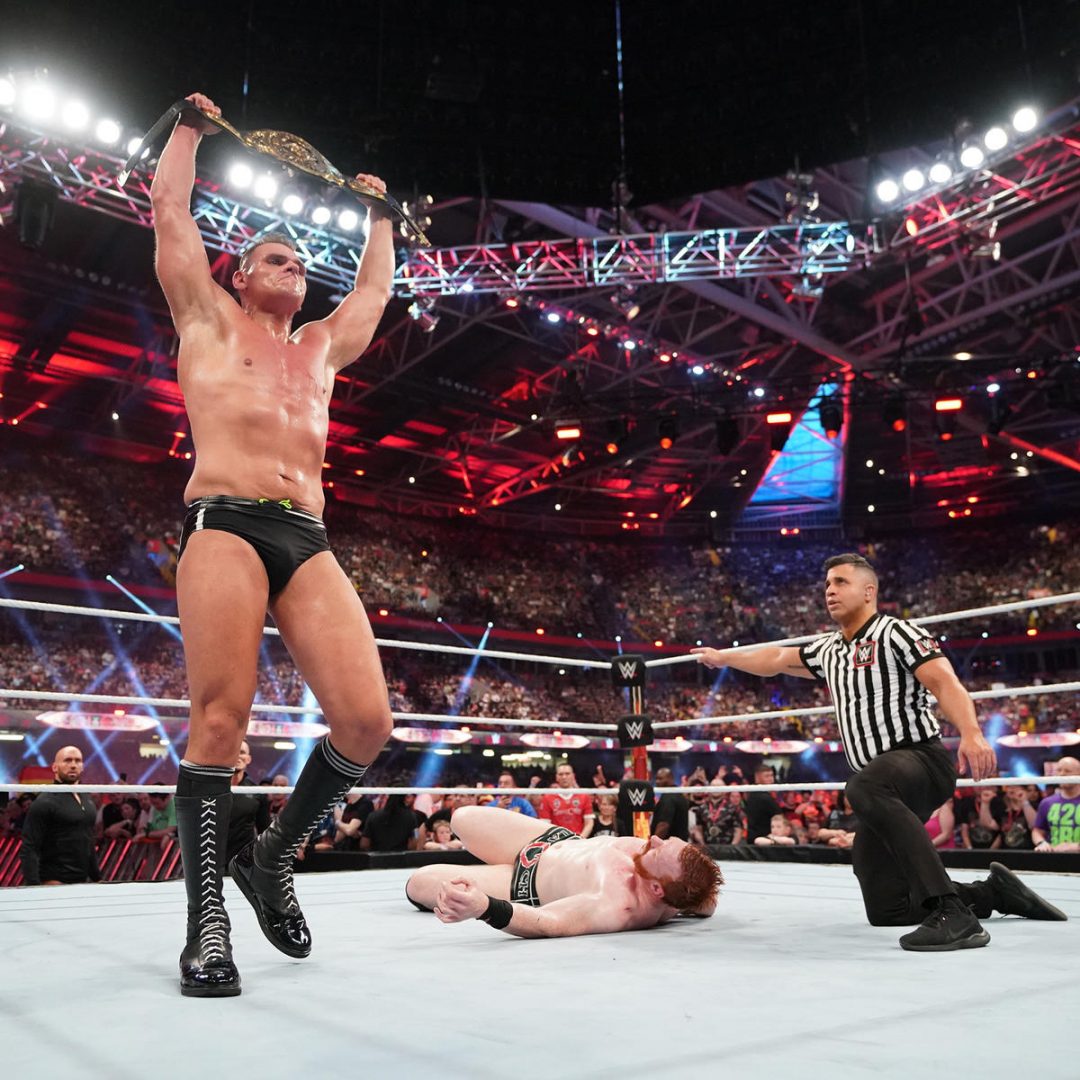 The surprise of this match took place before the match when Ludwig Kaiser was doing his introductions and introduced Giovanni Vinci, the former Fabian Aichner. He also introduced Gunther as the leader of Imperium so that means that trio is officially back together on Smackdown. That’s great. They were a terrific tag team that should’ve never been split up. Sheamus and Gunther beat the ever loving crap out of each other. This was my match of the weekend and probably up there in the top two or three for match of the year so far. Sheamus has yet to win the Intercontinental Championship so a part of me thought that they might pull the trigger here. They didn’t, but Sheamus put on the performance of a lifetime in front of his fellow Europeans. The post-match standing ovation that Sheamus received was well deserved. They traded nearfalls but in the end, Gunther nailed the Powerbomb and a lariat to end it.

Words can’t even describe how awesome this match was. Easily Gunther’s best match on the main roster and probably Sheamus’ best match period. The chops, the forearms and the storytelling trying to hit a Brogue Kick, but he collapsed with a sore back. That’s when Gunther hit two big moves to get the win. It was a masterclass on how to tell a story and still put on one of the best matches of the year. Who knows if the feud will continue but I’m here if it does. Maybe we expand it to Imperium vs. The Brawling Brutes. Either way, I am VERY excited for the future of the Intercontinental Championship. 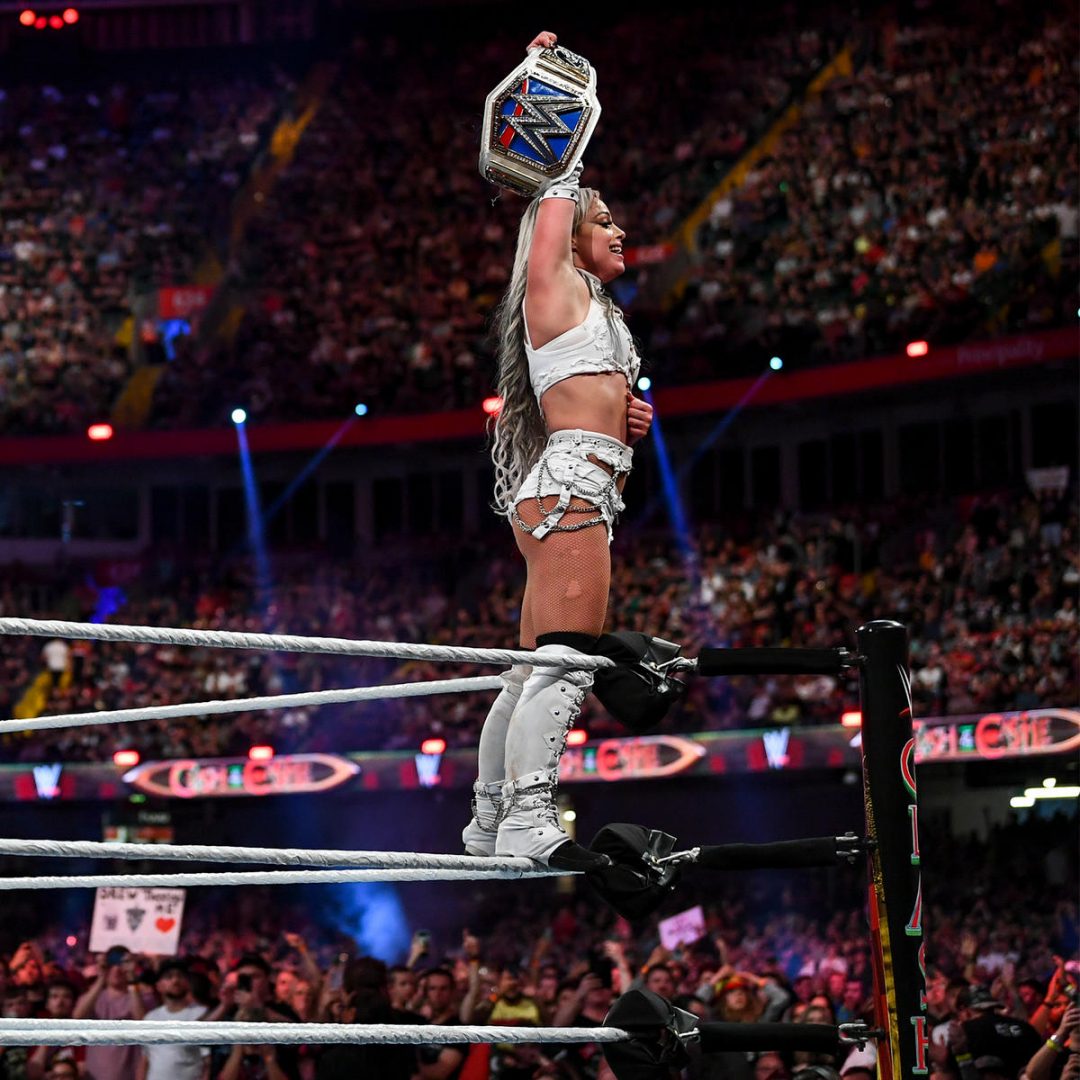 The air was out of the crowd a little bit for this match because it followed the Gunther/Sheamus battle, but at least Liv didn’t really get booed which I thought was a positive. Triple H has done a good job over the last month of rebuilding Shayna Bazsler as the killer she was in NXT while still trying to keep Liv Morgan strong. This was a nice, decisive, clean victory which is what she needed after the controversial win at SummerSlam. It is very important that Liv stays strong because, at some point, she is going to lose that championship and it is important that you keep her strong so she will look credible for future title shots. You don’t want a situation where her title reign looks like a fluke so you never take her seriously when she gets another opportunity.

The match itself was solid. I thought it was hurt a little bit by following such an outstanding match by Gunther and Sheamus, but I thought the match had the right result by putting over Morgan clean. It was definitely better than Liv’s match with Ronda Rousey at SummerSlam. Who knows where Liv goes from here but I’d bet on a rematch with Ronda. There are not that many options on Smackdown. 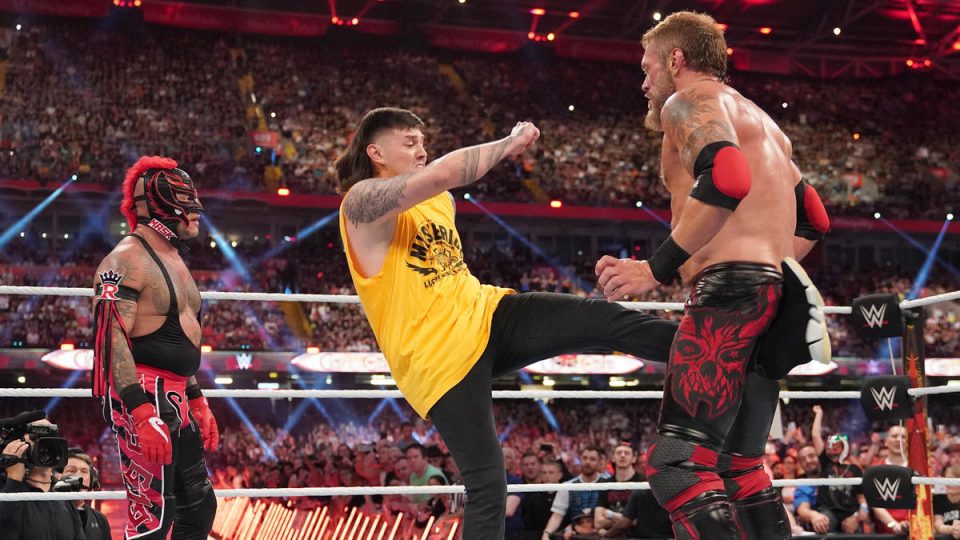 There was speculation of a big angle, but we didn’t know for sure. The match was good. Edge got a thunderous ovation as usual and I’m sure it was great for Finn to be in Cardiff. There were some sloppy moments that left the referee out of position but overall I thought the match was solid. The ending came when Dominik tripped Balor, allowing Rey to hit the 619 into a Spear from Edge for the pinfall. I assume this feud will continue in some shape or form, but it depends on Dominik Mysterio.

After the match, Rey and Edge were celebrating with Dominik when Dom kicked Edge RIGHT IN THE NUTS! Edge went down as Rey was upset. Rey tried to get answers out of Dom until his son nearly took his head off with a clothesline. You could see this brewing ever since Edge accidentally Speared Dom a few weeks ago when he came to help The Mysterios fend off Judgment Day. Rey accepted his apology, but Dom didn’t. Dom then felt hurt that Rey chose Edge to be his partner instead of him. The signs were there and they actually played it perfectly. Dom probably got the second biggest heel reaction of the night so I’d say the angle worked. I’m interested in seeing where it goes, which is something I don’t think I’ve ever said about an angle involving Dominik. 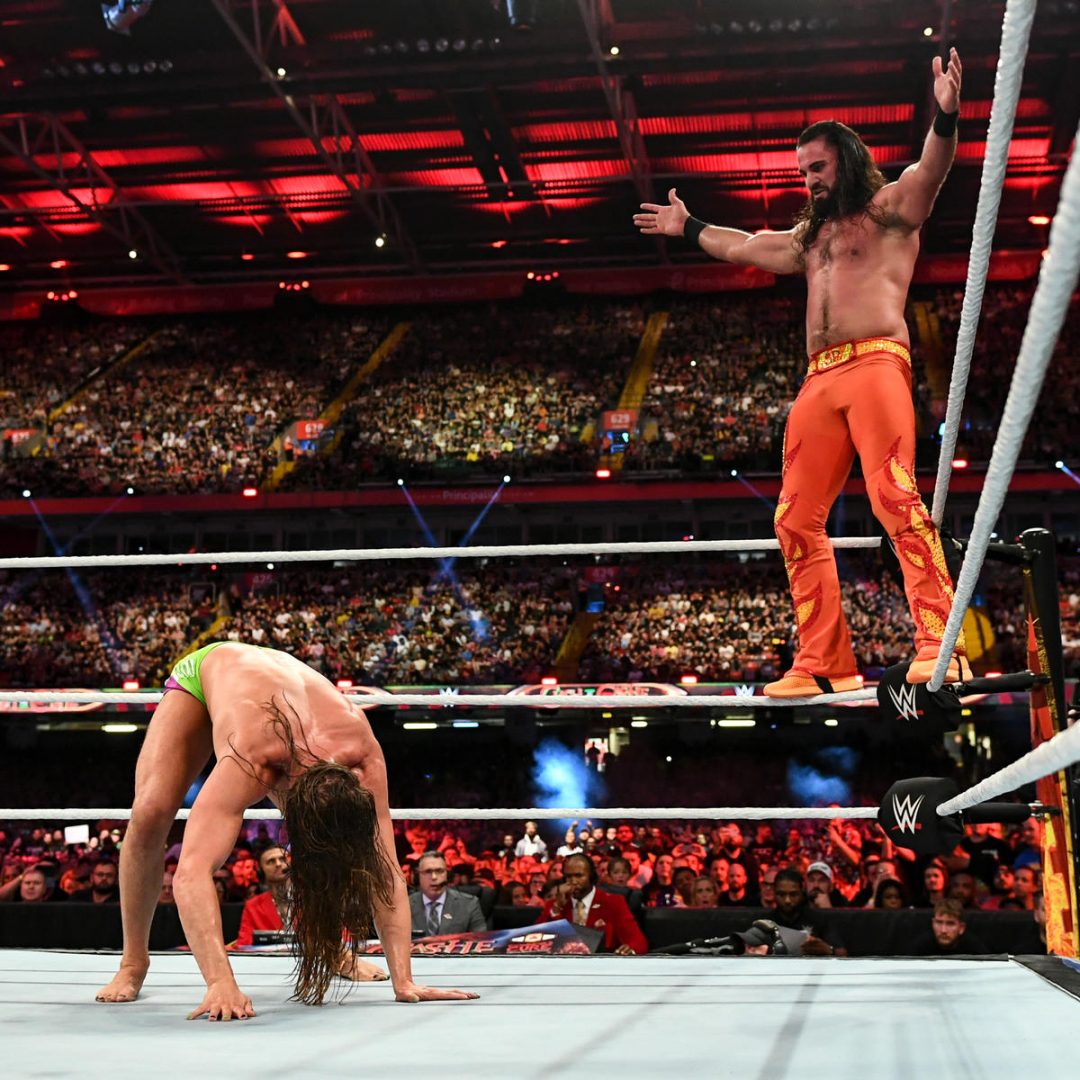 Good to see Riddle getting his first name back. This match was everything I expected it to be. It was hard hitting right out of the gate. I thought they did a good job telling the story of how it took Seth everything he had and then some to put away Matt Riddle. This was a competitive, hard fought match that was one of the highlights of the show.

Seth “Freakin” Rollins needed this win. Riddle needed it too, but Seth “Freakin” Rollins hasn’t won a Premium Live Event since the Royal Rumble and that was by DQ so it is good to establish him as a threat. Due to the lack of heels on the brand, you need Seth to stay strong and I thought they did an excellent job of getting him the win without hurting Riddle since it took a middle rope Curb Stomp to put him away. I feel like this will continue into Extreme Rules, possibly with a stipulation involved. 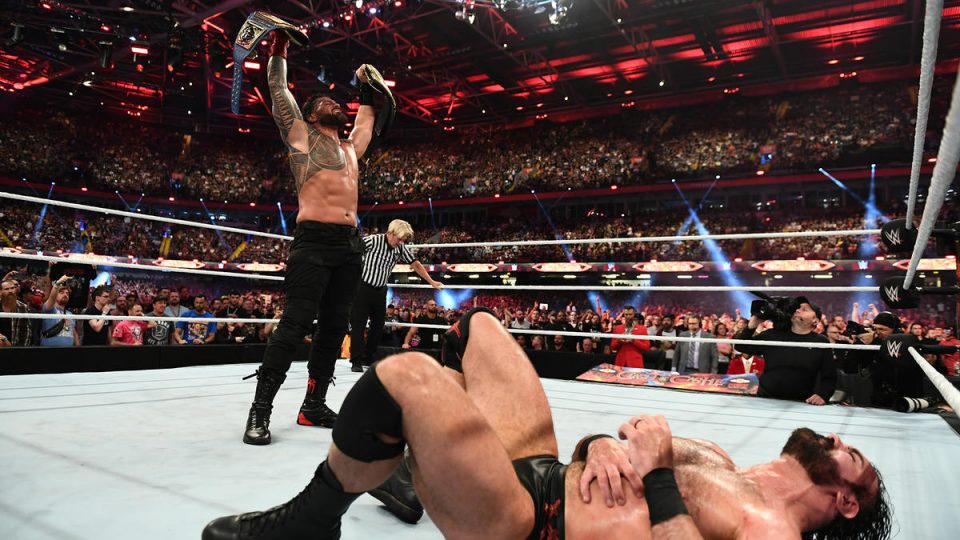 This was as advertised. We got Broken Dreams to start for Drew McIntyre. Roman Reigns got massively booed in the UK which I thought was surprising. The match was great. There were plenty of moments where I actually thought Drew might be the one. Drew hit multiple Claymores and had the crowd eating out of the palm of his hand. Austin Theory (congratulations on getting the first name back, pal) came out to cash in Money in the Bank until Tyson Fury knocked him out to the delight of everyone. Drew hit that last Claymore and I thought that was it but the referee Charles Robinson got pulled out right before the three count by Solo Sikoa, who is the former NXT superstar that is the younger brother of Jimmy & Jey Uso and cousin of Roman Reigns. It was a surprise moment, but one we should have seen coming. Solo has been rumored for a call up for a while and The Bloodline is a ready made story for him. 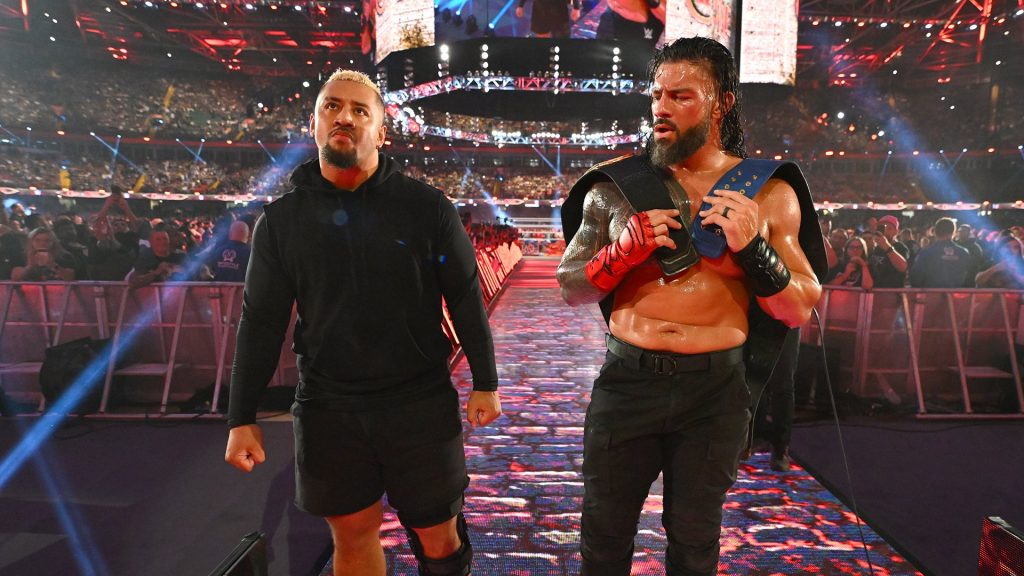 I know some might be upset that Drew McIntyre lost. I’m one of them. I thought this was a perfect time to have that moment in front of his home country (he is from Scotland and this was Wales, but it’s all part of the United Kingdom with Drew saying it was “my island” often.).

Now what? The person who finally beats Roman Reigns should be someone that is elevated because of it. It would be perfect if it was somebody that hasn’t been World Champion before. It became clear to me as soon as Clash was over that the man to defeat Reigns is Cody Rhodes. It’s obvious that’s what they are building to and from that perspective, I understand it. I still feel for Drew but if we are talking about long-term and not just one night, the better option is Cody.

That’s it for this week. The next Premium Live Event is Extreme Rules on Saturday, October 8th. I don’t think Roman is scheduled for that show, so it will be interesting to see what matches they go with and what headlines that show. The last month of WWE programming has been some of the most fun I have had watching WWE television in years. Hopefully, it stays the course. Under Triple H, I think it will.