Life is hard. To anyone reading this, we aren’t sharing with you anything you already don’t know. For some, their lives are far harder than others. To others, opportunities come, and even a bad moment can lead to bad choices, a cavalcade of opportunities lost, and ultimately the end.

While there are those in the wrestling industry who have been very public about their demons, it is that openness that offers hope.

“Like in 2017, the drinking was really out of hand. It was easy to hide, because alcoholics are very good at hiding their alcoholism. So I was hiding it from a lot of people. I got injured and when I came back, I was just in a bad place mentally, and not to blame it on taking medications that I definitely shouldn’t be drinking with, but I guess I just kept drinking and kept fuc*ing up.”

“The drinking, yeah, it got completely out of hand to the point where everybody was noticing. There was no hiding it anymore. Everybody knew. It’s sad to say looking back, but at the time, I knew everybody knew and I still didn’t give a fu*k. I was like, I didn’t care. I don’t know what switch flipped in my head, but I really gave up spiritually. At that point, I was done.” –W.Morrissey shares about his need to seek help.

In 2009, a young William Morrissey was trained by the famed Johny Rodz school. Rodz has trained countless men and women throughout the years. From The Dudleys and Tommy Dreamer to Marti Belle, Rodz helped talent develop earlier on in their careers. Like anyone looking to develop a persona, Morrissey first found his way as ‘Big Bill Young’ and had a cowboy gimmick in the process.

After a couple of years under Rodz and competing for World of Unpredictable Wrestling (WUW), Morrissey signed with the now-defunct FCW (Florida Championship Wrestling). As fans know, FCW later became NXT, and the rest, as they say, is history. Upon his entry into FCW, Morrissey would debut as Colin Cassidy. But like anyone on the roster looking to find themselves, Cassidy would need to emerge as something not just in his presentation but also in his association. 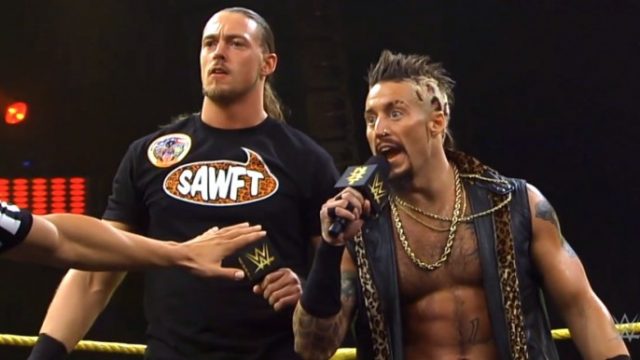 It would take a couple of years before he would begin teaming with the always brash Enzo Amore, and Colin Cassidy would become ‘Big Cass.’ This was also a case of success sometimes comes not just with what you know but who you know.

“I first met Enzo when I was 15 years old. We used to have pickup basketball games at a place called The Cage in the West Village of Manhattan, N.Y. He ended up being one of my teammates and we pretty much bonded from there.“ – Morrissey recalls first meeting Enzo.

“During a game, I drove the lane and got clobbered but the referee never called the foul. A little scuffle almost ensued with some players on the opposing team, but Colin (Cassidy/Morrissey) had my back the whole time…” – Amore recalls a situation when Big Cass had his back.

Both men went off and pursued other things outside of basketball. Whether it was Cassidy’s studies at NYU or Enzo playing football at Salisbury University, the two were exploring other professional options away from one another. When the two men reunited in FCW/NXT, it was as much a surprise to one man as it was to the other. But it was that time away from one another that also gave both men an opportunity to grow and become something more. They no longer were the same people they were years earlier. While they could apply the same qualities that made them who they were on the courts of Manhattan, it would be an old friendship that was just what both men needed to make their mark on the brand.

Over the next four years, the duo became fan favorites. From their infectious catchphrases to crowd response, they were a very popular team. But despite their popularity, they never captured the WWE Tag Team Championships. It was always something where they were just so close but never quite close enough to overcome the hump and be the one. When the pair split up, the belief appeared to be as though they would move into singles competition and achieve success on their own. For Enzo, he was moved to the Cruiserweight division and then became the Cruiserweight champion and subsequently had his own separate run in the company.

But for ‘Big Cass,’ it was a chance to stand alone and succeed. Once his feud with Amore came to an end, he would transition into a feud with Daniel Bryan. But on June 18th, 2018, Morrissey would have his last match in the WWE.

Multiple sources told SI that Big Cass was drinking the majority of the European tour and had attitude issues when drunk, which led to his unexpected release from WWE.

The man that was 7 feet tall and someone that couldn’t be taught was now no longer a part of the WWE. For all his promise and all that was believed to be in front of him was wasted. While many men and women would make decisions that would help support their future, Big Cass squandered it at the time. After his departure, Cass had to reflect on his choices. But his choices were also fueled by his battles with mental health. And as he continued to compete on the independent circuit, he was faced with a very real and very scary moment as he had a seizure while competing for Tommy Dreamer’s House of Hardcore show. He needed to slow down and reassess not just his life professionally but personally as well.

“I am sitting here right now and telling you that I should be dead with the amount that I drank, and the seizure that I had – I shouldn’t be here. If anybody out there suffers with depression or anxiety and you’re hiding it because there’s a stigma out there that you’re weak – you’re not weak. Whatever it is, you need to go seek help. Because whether it’s medication or talk therapy or whatever it is that you need, you need to get it. Because hiding it deep down, it ain’t gonna work. And that’s what I did for a long time and eventually – pop! Everything, it’s just an explosion. Whatever you need to do to fix it, make sure you do that. Because keeping that $#!+ bottled deep down, it ain’t worth it. Trust me, from someone who lived it, seek help.” – Big Cass (W.Morrisey on his addiction and mental health struggles.

There is an old adage. A person isn’t measured by how often they fall down but by how often they get back up. W. Morrissey would compete on the independent circuit alongside former tag team partner Enzo for various promotions. In fact, prior to his seizure and recovery from alcohol addiction, Cass would compete in Ring of Honor. Unfortunately, his addition wasn’t met most favorably by fans and was short-lived.

In April 2021, W. Morrissey found new life professionally. He appeared to be in the best shape of his career and debuted for IMPACT! Wrestling. Morrissey has competed for the IMPACT! World Title. He’s been involved in a tag team alongside Jordynne Grace. But for all Morrissey was capable of doing, it was about what he is doing that should be celebrated. With his height and size, Morrissey is doing more now to prove that he can show more than potential. Recovery isn’t quick and lasts a lifetime.

For the now 35-year-old W.Morrissey, he is still prime to achieve. His best is still ahead of him too. With a new lease on life, there is no reason to think that W. Morrissey won’t rebuild himself. After all, life is filled with obstacles, and you can’t teach that. But what you can hope to do is learn from those obstacles and be better.

CM Punk: Examining How Much of a Financial Success He is to AEW