Welcome to the WWE Raw Reaction, where I offer my take on this week’s show from Wilkes Barre, PA as we begin the road to Survivor Series.

The Raw Intro kicks off the show followed by a recap of Crown Jewel. The PLE was decent. Logan Paul really impressed for sure.

We go to the ring for Promo Time with The Usos and Solo Sikoa. The Usos talked about their tag title match against The New Day on this week’s Smackdown and the tag title record. Here comes The New Day to talk about what the tag title record means to them. Woods also talked about how they (New Day) had to fight and claw their way to get everything they’ve earned while the Usos just had to mention their family name to get opportunities. The Usos fired back and out comes Riddle with his bongos. Riddle wants everyone to play the bongos with him and sets up the six man tag match next.

I really liked the opening promo between the two teams. It was a nice trip down memory lane with two of the best teams on the roster right now. It gives Smackdown’s tag title match a big fight feel. Not only are the tag titles on the line but New Day’s title reign record as well. It was a great setup for Friday and hard to pick a winner right now. 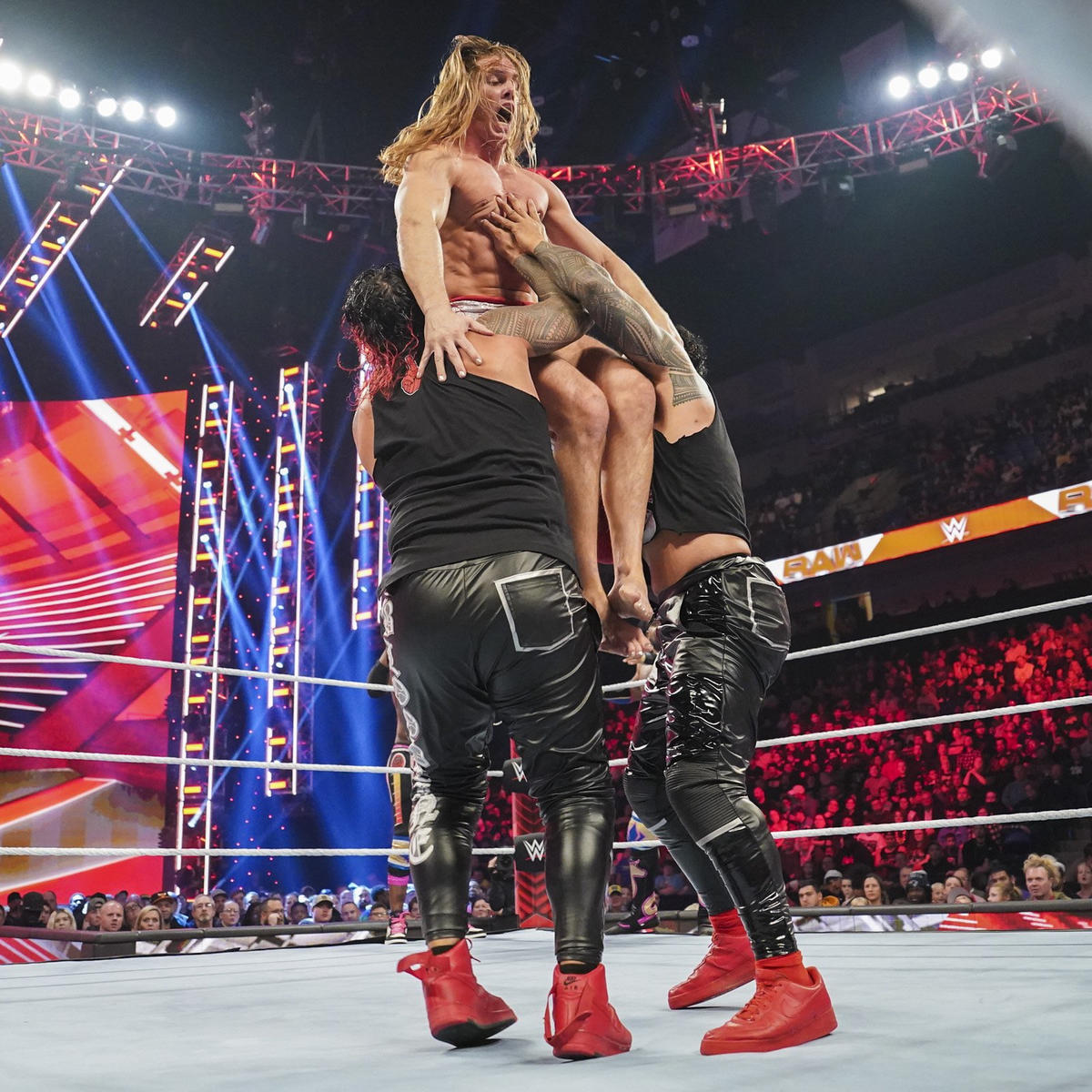 The six man tag was really good. The two tag teams mesh well. Riddle is growing by the week and should be well-positioned when Randy Orton returns. Solo Sikoa shows off his dominance every time he steps into the ring. They got sufficient time to put the match together, as a nice little preview for Smackdown. Solo picked up the win over Riddle to protect the two teams heading into their big match on Friday.

JBL comes out to cut a promo before introducing Baron Corbin ahead of his match with Cedric Alexander. JBL tries to make Corbin interesting before he demolishes Alexander in a squash match.

There was a graphic telling us that Logan Paul’s selfie top rope elbow drop at Crown Jewel has over 40 million views, which made it the most-viewed social media clip in 2022. It was an impressive spot.

United States Champion Seth “Freakin” Rollins comes out for his US Title Open Challenge. The challenge is answered by, The Judgment Day? All four members come out but Balor is the only one who enters the ring. The OC make their way to the ring next. Rollins, not wanting to get in the middle of their feud, heads to the back. 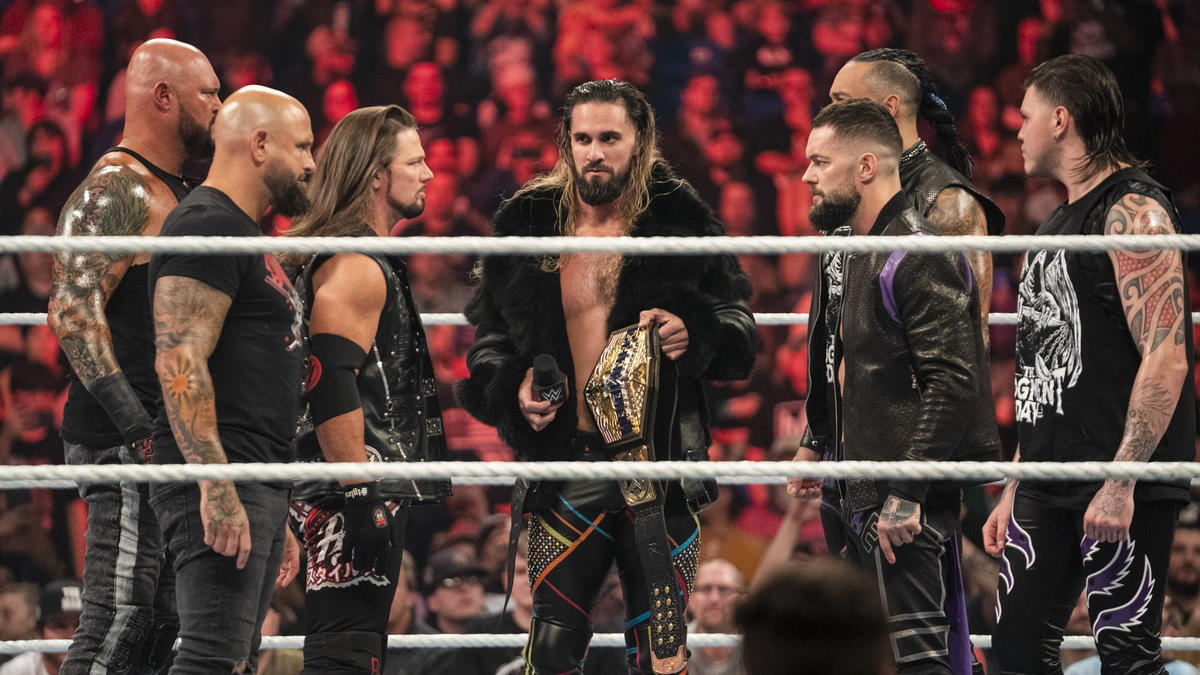 Styles says that the three of us (OC) have had to constantly deal with the four of them, but they have a solution to their Rhea problem. Rhea is heard going splat into the ring post by none other than Mia Yim. The fight is on which The OC wins with the help of their equalizer, Yim.

Finally, a face team that gets smart and has a female wrestler to combat Ripley. It’s great to see Mia Yim back (as she was rumored to be joining the group). She’ll be a welcome addition to the thinned women’s roster. We should be getting some mixed tag or singles matches until Beth Phoenix is ready to take the feud over, maybe at the Rumble.

Rollins is backstage with Cathy Kelly and he will still have his open challenge later tonight.

Back in the ring, Elias is getting ready to take on Otis of the Alpha Academy. Congrats to Otis for his recent announcement of beating dyslexia. Good for him. The match was, surprisingly, a Three Minute Raw Special with Otis coming out on top. Unusual to see Otis pick up a singles win, but Alpha Academy sure needed one. Surprised Elias took the L since he just came back, but Otis really needed the win more.

The Judgment Day was backstage talking about Mia Yim’s return when Bianca Belair walked by, reminding us of the title match we haven’t gotten yet.

Promo Time with Bianca Belair, Alexa Bliss, and Asuka is up next. We get a video recap from the Crown Jewel happenings and a parking lot confrontation from earlier today. Belair talks about Damage CTRL and here they come. The new Women’s Tag Team Champions talk about winning the titles at Crown Jewel. Bliss told them to thank Nikki Cross for the helping hand. Asuka starts ranting in Japanese so Io responds. They get into a dueling Japanese promo battle which someone on Twitter did subtitle for us later. Io ended it by calling Asuka a bitch in English. The fight was on and the faces cleared the ring. Belair said that the only way to settle their war was in WarGames. Cross jumps Belair and lays out the faces with help from Damage CTRL. Surprisingly, there was no face save attempt to drop a hint as to who a partner will be for Belair’s team. There’s the 3 on 4 so far. The teams will be 5 on 5. 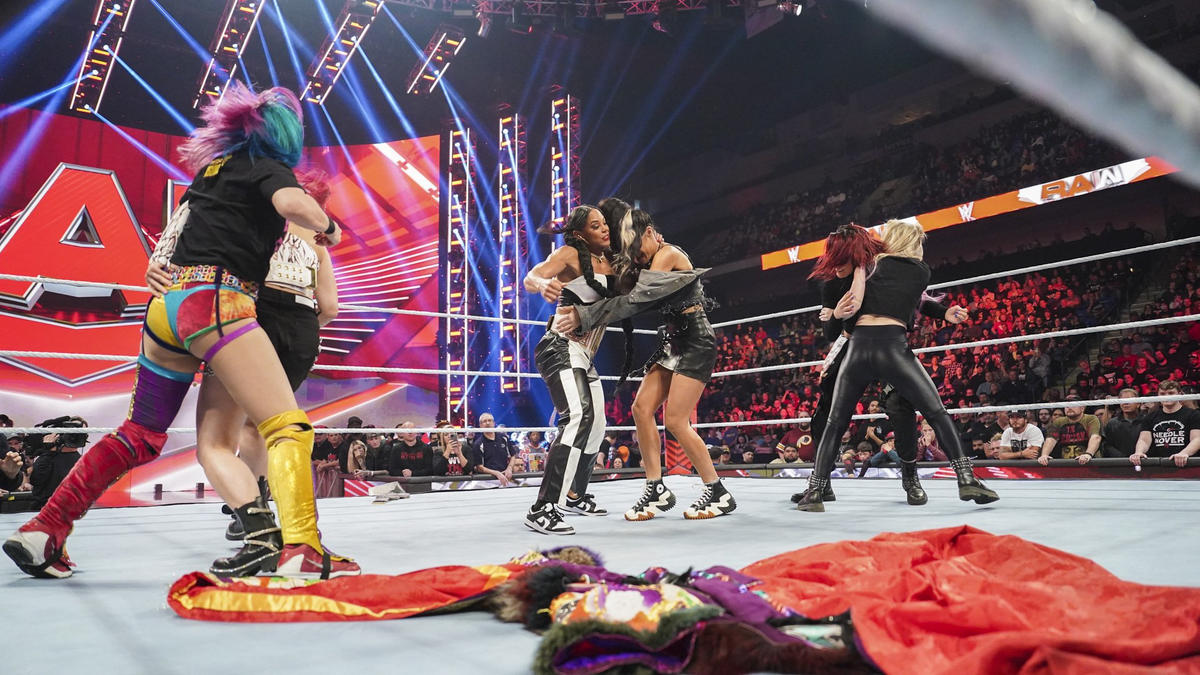 That Japanese promo battle was just so awesome. They had to sell the Japanese with their facial expressions and did a great job. It felt like it was going to end in an Anime battle or Pokemon duel. If we ever get the Asuka/Io feud, they need to do all of their promos in Japanese. Maybe start subtitling them.

What did we do to deserve a Shelton Benjamin sighting on Raw? He still lost to Austin Theory in a Three-Minute Raw Special, but when was the last time he was actually on the show?

Before we get to the Miz/Johnny Gargano match, we are treated to dueling promos where we find out that Gargano got Miz to admit to paying Dexter Lumis to attack him on video. At least they finally got to the point of that feud. Their match was really good. Miz did Miz like things to steal the win but it was a really good effort. After the match, Lumis shows up to drop Miz with a chairshot before getting run off by security. I wouldn’t be surprised if the Miz/Lumis contract match is next week on Raw. They could hold it off until Survivor Series though. 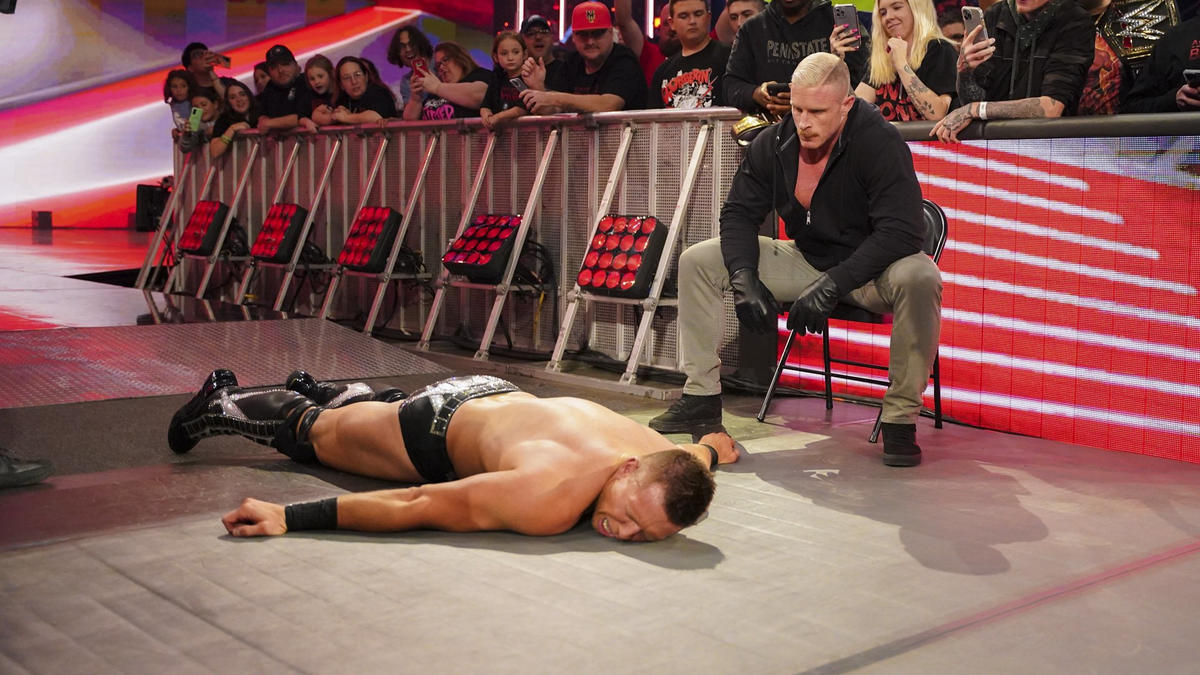 Another rare sighting of the 24/7 Champion Dana Brooke defending the title against Nikki Cross. Damage CTRL comes out with Cross and she makes short work of Brooke to capture the title. Cross seems so disinterested in the title that she totally missed the garbage can she was trying to toss the title to as she walked by it backstage. It’s a shame R-Truth is out injured and we can’t get one final segment of him dumpster diving to get his baby back.

Seth Rollins is back out for Take Two of his open challenge. Mustafa Ali appears on the Titantron to accept the challenge before getting destroyed by Bobby Lashley. Lashley comes out and destroys Rollins before the match even can begin. Austin Theory showed up and decided to cash in his Money in the Bank contract on Rollins. That match was pretty good. Rollins made Theory look good. Lashley turned back up and destroyed Theory to allow Rollins to retain the title to close out the show.

There’s a lot to take in here. If Lashley wanted his title back so bad, why didn’t he beat Rollins up in the ring so he could have recaptured it instead of having to be forced away from the ringside area? Why didn’t Lashley just help Theory cost Rollins the title for payback instead of costing Theory the match? People are going to be mad that Theory wasted his title shot on a midcard title, but the US title is the Raw World Championship since Roman is holding the titles hostage and he doesn’t work on Mondays. It was making the best of the situation with their limited options available. I’d hold off judgment until we can get some explanations next week. 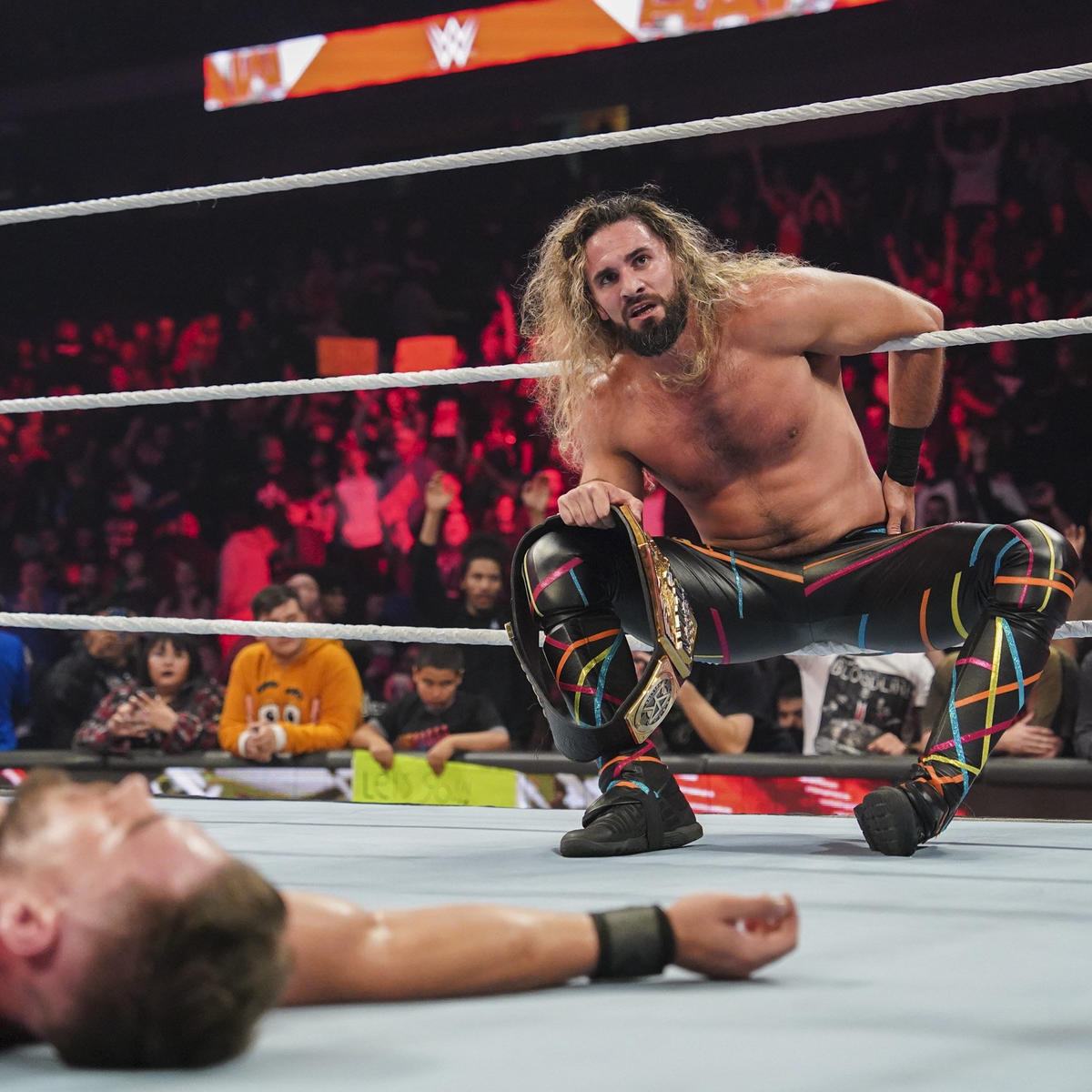 I know John rated this week’s show at a 7.25 out of 10. I think that was a fair rating. The show was really good overall but the small market crowd was a killer. I’ll give the show a 7 just because the crowd was not that good.

The in-ring product this week was solid. The six-man tag and Gargano/Miz matches got sufficient time to get where they needed to go. The squash matches all served purposes this week, advancing some possible stories along the way.

The two main promos from New Day/Usos and Asuka/Io were really good. I liked the Asuka/Io one better than New Day/Usos. It was just so unexpected that it felt spontaneous. That sold me for one more match between the two teams. The New Day/Usos promo was a great trip down memory lane to give their Smackdown match a big fight feel.