Welcome to the WWE Raw Reaction, where I offer my take on this week’s show in Washington, D.C. as we continue on the road to Clash at the Castle on September 3rd.

We kick things off with Promo Time with The Judgement Day trio. They run down the Mysterios and Priest hypes his match next week in Toronto with Edge. Rey Mysterio shows up solo and tries to take out the Judgement Day but the Rhea Ripley logic gap comes into play and Mysterio gets laid out. I feel like The Judgement Day angle is losing some steam with the whole “Nobody can hit Ripley but she can hit everybody” thing. Either add a female to the feud or boot her. It’s typical WWE midcard face booking to look like fools every time Ripley slides in only to get destroyed by The Judgement Day.

Our opening contest is a quarterfinal match in the WWE Women’s Tag Team Championship tournament with the team of Alexa Bliss and Asuka taking on Nikki A.S.H. and Doudrop. The winners will face Dakota Kai and IYO SKY next week. Yeah, that doesn’t tell you who is going to win now does it? The match was pretty good, even with the obvious outcome. Bianca Belair did come out to support her tag team partners in the beginning so there’s another hint. The closing sequence with Asuka was so fluid it was rather impressive. After the match, the two teams faced off on the stage. No fight this week. Bummer.

Theory ran his mouth backstage to Dolph Ziggler and we still don’t know why they are feuding. They fight so we can have a reason for their match later, I guess?

More tag team action with The Miz and Ciampa teaming up to take on the newly formed team of Mustafa Ali and Cedric Alexander. The Ali/Alexander team has some promise in the thin tag team division right now. Ciampa needs to ditch the #DYI project with The Miz and get himself a better partner for in the future. The match was a good way to introduce the Ali/Alexander team but Miz/Ciampa picked up the W here.

Drew McIntyre is so hot backstage there’s a garbage can on fire. That or Kane was nearby. Crew members are trying to put it out. McIntyre hits the ring for Promo Time. He’s ready to take the titles and defend them every night. Kevin Owens shows up to interrupt and says he’s ready to be the prize fighter again. McIntyre was ready to fight now and so was Owens. Where’s Teddy Long or Adam Pearce? Fantastic proms from both of these guys. McIntyre is likely getting his title win in front of fans at The Clash. It only makes sense. It’s good to see the renewed fire within Owens and that could be a good title feud in the future.

Pearce allowed them to fight during the break and the match between McIntyre/Owens was simply awesome. They fed off of each other’s promo and delivered big time. The match had everything you could have wanted in it. Well, except for the Usos run-in. The DQ finish was lame, but I’m guessing this will be revisited down the road. If you did not see this match, go watch it. After the match, McIntyre disposed of The Usos.

Promo Time with Seth Rollins was up next. He talked about Riddle before Riddle appeared on the Titantron. Riddle said that not only was he medically cleared, he was in D.C. Riddle ran to the ring to fight with Rollins, eventually chasing him out of the arena through the crowd. Riddle would challenge Rollins to a match at Clash at the Castle. 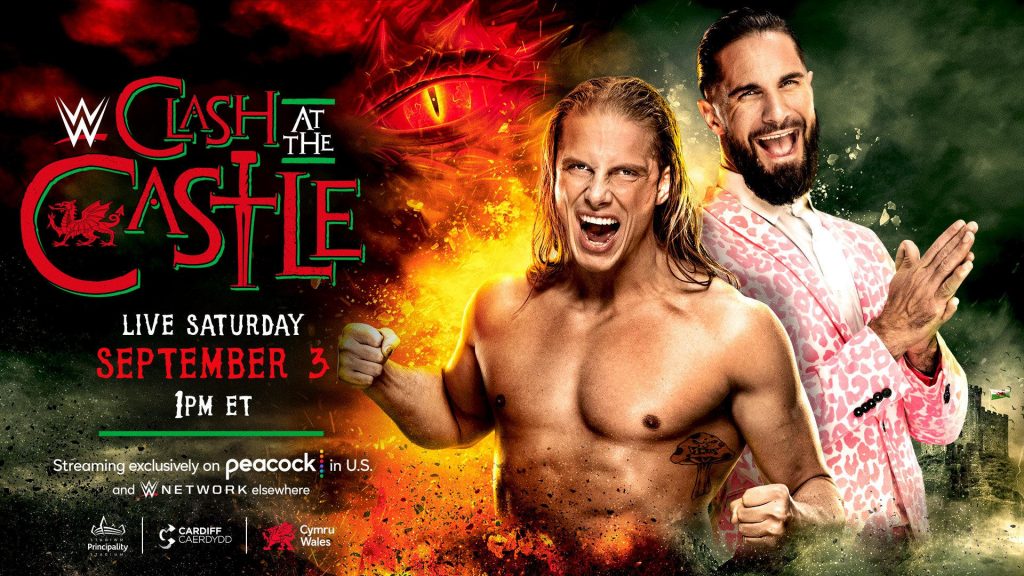 Hey look, Veer Mahaan is still on Monday Night Raw. Good to know. He beat some guy up whose name doesn’t really matter.

The United States Championship is on the line next with Bobby Lashley defending against AJ Styles. I’m surprised that this wasn’t the main event. It’s hard to believe that this is a first time ever match. The match was almost as awesome as the McIntyre/Owens match. Miz and Ciampa came down to sell the Dexter Lumis spot before they got kicked out. It’s great to see Lumis back. Lashley would pick up the hard-fought victory tonight to retain his title. This is another must-see match, if you missed it.

Dakota Kai came out to squash Dana Brooke. At least Kai got to keep her dignity as the 24/7 title was not on the line, nor were the 24/7 Job Squad anywhere in sight.

It’s main event time. Already? Theory takes on Dolph Ziggler after their fight earlier. The match was pretty good and your typical Dolph Ziggler match. Ziggler made Theory look good after he got mopped up at SummerSlam by Brock Lesnar. Ziggler put Theory over to close out the show.

The McIntyre/Owens and Lashley/Styles matches were fantastic. Easily the matches of the night. If you did not see them, go watch them. You will not be disappointed.

I really like the Mustafa Ali and Cedric Alexander pairing. They have similar styles and could be a really good addition to the Tag Division if taken seriously enough. I’m looking forward to see what they have in the future for them.

I get why The Usos had to wreck the McIntyre/Owens match. The Usos having to fight Roman Reigns’ battles for him because he is a part-timer has gotten old and we really need to move on from that.