TJR Faithful! It’s me Matthew J Douglas, and after about a year of hard work, personal growth, and an insanely busy work schedule, I’m back! I’m going to level with you guys and say that I haven’t missed all that much. It was a very busy year for me, but I watched most of the WWE’s content during that time (except 205 Live because I need to sleep sometimes). Needless to say, 2017 wasn’t one of my favorite years in WWE. Sure there were great matches (there shouldn’t be any shortage of those given the talent under contract from NXT to the Main Roster) but storytelling in many respects was, for the lack of a better term, wonky. I enjoyed the over the top craziness of the rise of Braun Strowman and the always impeccable work of The Miz, but there was also a pretty pointless and ill-conceived Shield Reunion, a bad Jinder Mahal Championship run, and plenty of simple storytelling blunders.

With that being said, it’s 2018 and I’m feeling optimistic. Mostly because this year’s Royal Rumbles were picture perfect. The Women’s Royal Rumble exceeded my expectations, and I was thrilled to see women that helped pave the way get to come back to participate in the milestone moment for Women’s Wrestling in WWE.

The Men’s Royal Rumble was absolutely fantastic, not only because the right man won, but because the booking and storytelling throughout and particularly toward the end were flawless. The Final 6 showdown between the old guard and the new guard (Cena, Orton, Mysterio vs. Shinsuke, Balor, and Roman), and the final 4 face-off between The Company Golden Boys and the Fan Favorites (Cena and Roman/Shinsuke and Balor) were really cool moments. That’s without mentioning the order of eliminations down the stretch (which were impeccable), and the fact that Goldust was in the top 8, which felt like it was a nice moment to throw the veteran given the star power inhabiting the ring at that point during the match.

I could keep gushing about the Royal Rumble, but I need to get to the reason I’m here; to resurrect A Matter of Character. With so many new characters to talk about in the WWE right now, as well as several old subjects worthy of revisiting, it’s a perfect time to bring back my old column and delve into the characters within the WWE, their development or lack thereof.

For the first A Matter of Character column in quite some time, I’m going to be examining the #7 Entrant in the 2018 Royal Rumble Match. A man who lasted nearly 30 minutes in the Royal Rumble, the night after having a 32 minute, 5 Star Match, where he retained his NXT Championship over the scrappy Johnny Gargano at NXT Takeover Philadelphia. Of course, I’m talking about the current NXT Champion, a man formerly known as La Sombra, Andrade “Cien” Almas, who is without question, one of the most intriguing characters in all of WWE right now. Let’s Do This!

Andrade “Cien” Almas is a 3rd Generation Wrestler and had been wrestling for 12 years before signing with the WWE in 2015. Most of his time before joining WWE was spent in CMLL and New Japan Pro Wrestling as La Sombra. He made a name for himself under a mask, even founding the popular CMLL faction Los Ingobernables.

He signed with the WWE in 2015 and made his on-screen debut at NXT TakeOver: The End in June of 2016, without his trademark Lucha Libre mask. He wrestled as a babyface character for several months, and while technically he was proficient in the ring, and never participated in a bad match, there was undoubtedly something missing from the overall package.

He would turn heel in October of 2016, and while that role did seem to work better for him, something still wasn’t clicking. He was the kind of guy whose matches you were never really excited about heading into a TakeOver show, but he would consistently deliver above and beyond your expectations whether he was in there with Bobby Roode or Roddy Strong, and yet it was hard to really care about anything he was doing.

Almas is an interesting case study because the guy has so very much going for him. He has a unique look to him, which is incredibly important. Most fans don’t vocalize it, but we want a little variety in the aesthetics of the characters we watch week to week. It’s at least a small part of why Braun Strowman has been getting over so well; he has a distinct look that sets him apart from the seemingly standard Seth Rollins long hair and a beard look. Andrade is a handsome, latin cat, that wears ring gear that isn’t quite like everybody else’s. He’s also a spectacular in-ring performer. He constantly over-delivers in the ring, which is hard to do when people know how good you are (see Shinsuke Nakamura). What was he missing?

The answer is a common one in the WWE this day and age. Almas lacked purpose as a character. Yeah, he could put on a great match. Yes, he was technically proficient and he had a look that set him apart from everybody else. But none of that matters when what you are doing is ultimately aimless in the purpose of the overall narrative.

I’ve been saying this for the better part of two years and I’ll say it again, a great match is a dime a dozen these days. If I put up a picture of every wrestler in the world and threw a dart while wearing a blindfold, I’d be hard-pressed not to land on a good to a great worker. There has never been more athletically and technically gifted talent across the board in wrestling than there is right now. A great match hardly moves the needle anymore. We’ve arrived in an era where great, fun, engaging characters will take the day, and interesting and complex storytelling will elevate great technicians to superstardom. 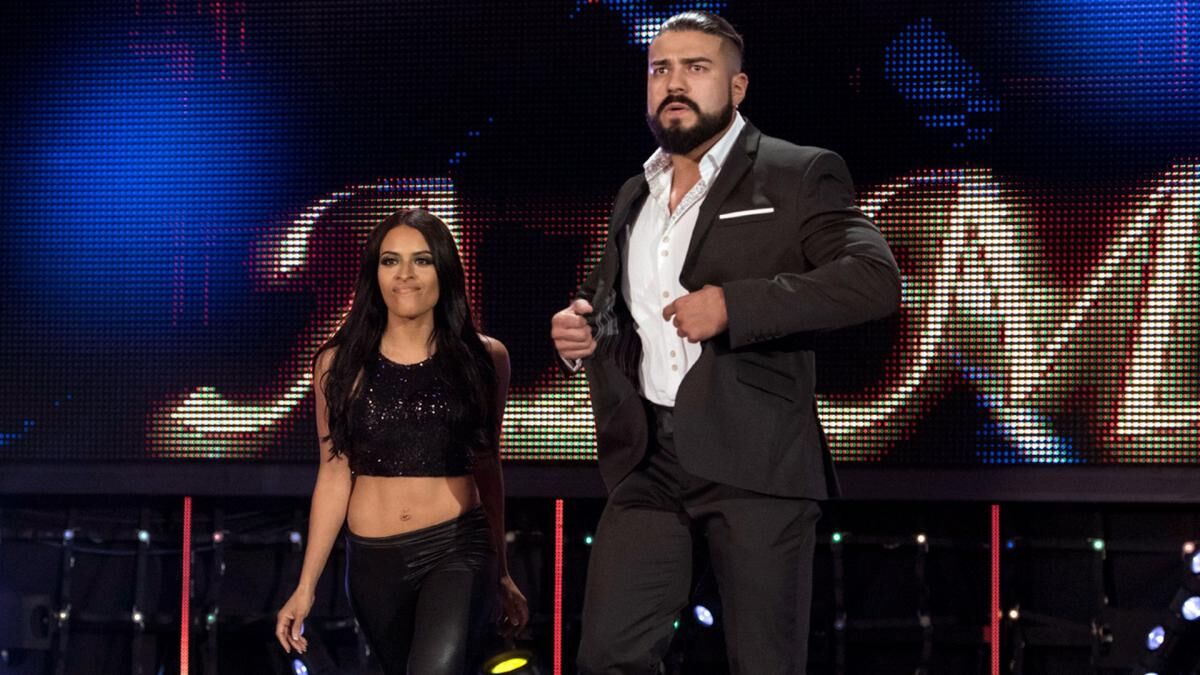 To recap, Andrade “Cien” Almas was in a rut at the end of 2016 that extended into early 2017. Yes, he was still a phenomenal worker, with a distinct aesthetic, who was often having great matches, but there was simply nothing for viewers to sink their teeth into. He wandered aimlessly for months just being kind of a generic bad guy until Zelina Vega entered the equation.

Zelina confronted a partying Almas, essentially telling him that if he wanted to accomplish anything, he needed to get his shit together and that she was going to whip him into shape. Her addition is a vital part of why the character is working the way that it is now. I’ve rarely seen an external character moment, and internal character development, completely embodied by the performer in everything that they do, including the way that they work in the ring.

The addition of Zelina did two things: it provided Almas, whose English isn’t the greatest, with a mouthpiece to speak on his behalf and help his verbal storytelling, and it applied pressure to him as a character. To this point, his matches had been great with no purpose. Though he had been losing his fair share of matches, even those losses didn’t really seem to matter that much. Once Vega joined his act, he started to win. More importantly than just winning though, it seemed like he needed to win the matches. His standard great in-ring work ratcheted up another gear. He was wrestling/performing with a new sense of motivation… or better yet desperation. Winning was everything. Losing was now unacceptable. Vega/Almas didn’t just convey this with their words or mannerisms; Almas demonstrated the desperation in how he worked. It suddenly felt like you were watching a guy who truly believed that if he didn’t put on a great performance and win, he was going to lose EVERYTHING.

It’s the sense of urgency and the feeling that performing well and winning is critical for his character that has elevated his already great wrestling. There is tension now in many of his matches. There are stakes. He wrestles like a character who NEEDS to win the match, and it comes across loud and clear. There is no wasted motion. He allows you to easily suspend your disbelief through absolutely incredible character work. It’s a simple piece of characterization that I’d say about 60% of the WWE Main Roster doesn’t quite pull off: Andrade “Cien” Almas since aligning with Zelina Vega, wrestles/works like his character.

Who he’s portraying, his history, his desires, his motivation, and personality all shine through in the way he wrestles his matches. He is a man who was unfocused, found a demanding coach/manager to refine his skills and help him concentrate his natural talents. He is now experiencing more success than he’s ever had before, and is deeply concerned he might mess it up and let himself and his demanding manager down. He desperate not to let that happen, and that desperation and urgency manifests itself in a cocky demeanor to help shield himself from criticism and his “no wasted motion” in-ring style. Sophisticated and spectacular character work.

The question that is left to answer about El Ídolo is where does he go from here? On NXT things are fairly clear. Whether it’s the night before Wrestlemania or at some later date, Almas will lose the NXT Championship. That domino falling will either lead to him becoming infinitely more desperate to reclaim what he’s lost and to prove that he really is as great as he’s seemed, or it will trigger a fall from grace, which can be followed by a triumphant return to glory as a babyface battling back from the brink of death, so to speak. The point is, there are a lot of avenues to explore for the Andrade “Cien” Almas that is clawing relentlessly to remain atop the NXT Mountain, fearful of what awaits if he tumbles down.

On the main roster, his future is much more cloudy. It’s hard to say that he’ll be able to convey the same kind of character to an audience that didn’t see the talented kid wasting his gifts, only to be refocused, reach the top and be flooded with desperation to remain there. There’s no doubt that Almas can work with anybody on the main roster, it’s simply how they go about presenting him. The WWE has demonstrated that they don’t re-tell the stories they told on NXT, which is why I fear that Almas, who is one of their most talented in-ring performers, will be utterly wasted when called up to the main shows. I hope I’m wrong because if I’ve made anything clear in this piece, this 28-year-old dynamo has something special to offer as a performer, as a character, and as a storyteller.

There you have it folks, my first piece back! I obviously want to know what you think. Do you see what I see in Andrade Almas (that he is at least one of the WWE’s most talented wordless storytellers)? Are technically good/great matches enough for you, or do you find yourself wanting to be more engaged? What do you envision Almas’ future on the main roster?

I want to hear what you guys think about this format for AMOC? Is it good or would you prefer the old format where I break down each aspect of the character in its own category (such as Personality, Appearance, Motivation, etc)? Also, let me know what characters you want to be examined for future pieces!

Until next time folks, I’m Matthew J. Douglas letting y’all know I missed this and I’m glad to be back! Have a great weekend everybody!