For many years there was this institutional thinking that WWE was the be-all-end-all of pro-wrestling. If one didn’t make it there, they were nobody. WWE superstars made the most money, got the most exposure, traveled the most, and reached the most fans.

But if all of that is so great, why, then, did Jon Moxley leave his WWE name and gimmick behind? Were personal pride and passion for one’s craft that important? Was he making good money doing something he hated? Or was it because he needed a new challenge?

Whatever his answer, Jon Moxley appeared in New Japan not long after Dean Ambrose vanished. Moxley’s first New Japan match was a celebrated event that served as a positive sign of things to come. But was it really that great? Read on to find out.

Jon Moxley left WWE on pretty acrimonious terms and made some notable and negative comments about his past employer. It was clear he was being ordered to play a part or play a character rather than really be himself. So when he came to New Japan, it wasn’t just the former Dean Ambrose being released; it was about the man behind the gimmick becoming unchained.

Almost immediately after his release, Jon Moxley set his sights on the IWGP US Championship, hoping to make a major impact when he debuted. But standing in his way was Juice Robinson, the former CJ Parker, who had a major career turnaround after settling into New Japan’s style. And after beating three different challengers, Robinson was getting his biggest test to date in the form of a former WWE Champion.

But could Robinson do it? Could he channel his fans’ love for him into the biggest win of his career? Or would a now-unrestricted Jon Moxley go on a warpath and tear Robinson to pieces in his own quest for glory?

This match originally took place on June 5th, 2019, right before this famous junior heavyweight war between Will Ospreay and Shingo Takagi. This match was rated ****1/2 out of five by the Wrestling Observer’s Dave Meltzer.

Robinson pulls off his bandana to reveal that he shaved off his dreadlocks. But Moxley doesn’t care as he flips double birds. The bell rings and the brawling begins. Back-and-forth they go until Moxley clotheslines Robinson to ringside and hits a suicide dive. Robinson goes flying into the crowd and Moxley continues stiffing him, and then he starts biting Robinson’s face. They brawl up the entrance ramp as Moxley tries opening Robinson’s wound. Moxley teases a piledriver on the floor but Robinson powers out and climbs onto an elevated platform…and then dives onto Moxley below. 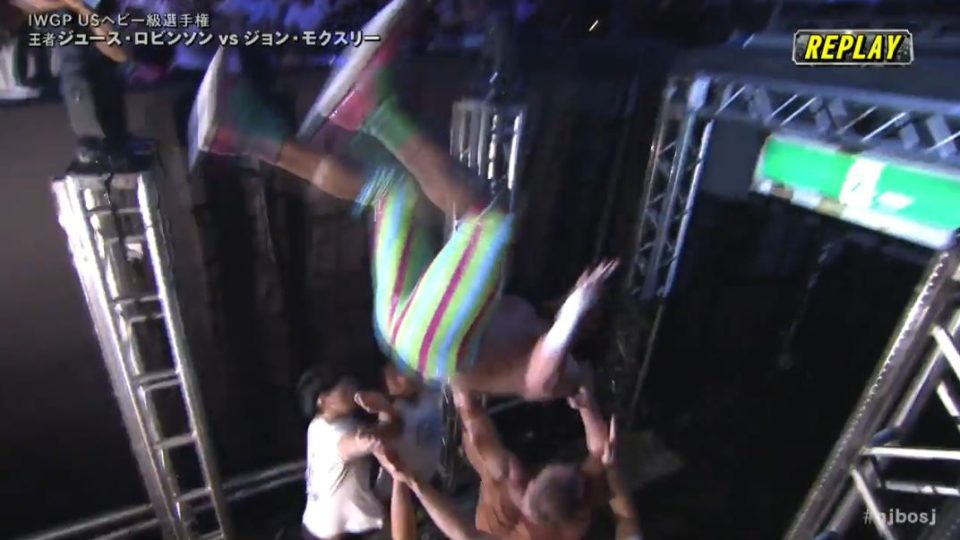 Robinson recovers first and drops Moxley throat-first on the barricade. He appears to have hurt his tailbone but continues throwing Moxley into hard objects. Still, Robinson charges for a cannonball, only for Moxley to dodge and Robinson hits the barricade tailbone­-first. Once back in the ring, Moxley goes after Robinson’s left leg. After Robinson kicks out of a neckbreaker, Moxley lands some mounted punches and bites the same wound again. Damn vampire. Moxley applies a single leg crab and then an STF but Robinson escapes by biting Moxley’s fingers. Moxley hits back but Robinson counters with a spinebuster.

Robinson fires back with a ton of punches and charges for another cannonball. Moxley escapes to ringside but Robinson follows with a plancha to the floor. Robinson crotches Moxley on the barricade and follows with two lariats, one at ringside and one in the ring. then he hits a fireman’s carry gutbuster but hurts his knee in the process. Undeterred, Robinson goes for a dive but Moxley sees him perched on the top rope and shoves him to the floor. Moxley pulls out both a table and a chair and whacks Robinson with the chair. I’m not sure why the ref’s putting up with this but I digress. Moxley places Robinson on the table and does a Mick Foley-style chair-assisted Cactus Elbow. Then Moxley suplexes Robinson onto the table and his leg goes through it.

Robinson makes it back into the ring at the ref’s count of 19.75 so Moxley punishes him with a rolling release suplex for a two-count. Moxley follows by smashing Robinson’s knee into a ringpost and then does the Bret Hart post Figure-4. Moxley threads Robinson’s leg through a chair and teases diving onto it, only for referee Red Shoes to stop him. Oh, so the earlier chair was ok but this somehow isn’t? And while Moxley’s distracted, Robinson throws that chair right at Moxley’s head, sending him crashing down into the ring. Robinson staggers around as he hits a corner lariat. He charges for another one but Moxley lariats him first. Both men collapse.

Both men stagger as they brawl around the ring until Robinson no-sells a chop. Robinson fights back and teases the Left Hand of God. Moxley cuts him off and teases the Deathrider DDT. Robinson drives both of them through the ropes. Moxley pulls out another table and tries to lawn dart Robinson into it but Robinson escapes. Robinson connects with his cannonball but the table doesn’t break. Robinson gets up first and powerbombs Moxley through a third table.

Back in the ring, Robinson locks in an elevated Boston Crab but Moxley escapes and hits a dragon screw leg whip into a Texas Cloverleaf. Robinson counters that by biting Moxley’s forehead and then avoids another dragon screw with a successful Left Hand of God. Robinson goes for his Pulp Friction/Unprettier finisher. Moxley blocks and teases a Deathrider. Robinson blocks and rolls him up for a two-count. Double lariats. Moxley goes to a knee but Robinson doesn’t. Another LHoG is blocked with a kick to the knee. Moxley hits one Deathrider. One, two, and Robinson kicks out. A second spiking Deathrider also lands. One, two, three! That’s it! Moxley wins the title in his first match for New Japan!

This was definitely a step up from what Mox had been putting out in WWE beforehand and he seemed motivated to show what he could so without so many restrictions. And yet, this match fell out of place for a New Japan show. It was more of a senseless brawl that would be more at home on the American indy scene than in sports-minded New Japan. It was putting a Salvador Dali painting in a Renaissance exhibit, this match stuck out that much. And while Moxley and Robinson did have a solid match, it fell short of expectations.

With Moxley entering a new environment with a distinct style, I expected him to shed more of his deathmatch and WWE-influenced habits. But he didn’t; he didn’t wrestle as much as brawl here. There were a few moments of logic and psychological depth here but those were mostly lost amidst the chaos of the ringside violence. Compounding that was the fact that there seemed to be no hard rule on what was allowed and what wasn’t. I get that referee Red Shoes was reluctant to disqualify anyone and he knew ahead of time what to expect out of Moxley and Robinson. And yet, his inconsistent admonishment of weapons use throughout the match made it seem like he was going with the flow and just waiting for some random opportunity to do some sort of officiating, regardless of whether or not it was warranted.

Maybe I’m just not into overlong brawls, but it seems like a lot of what these guys did could’ve been either trimmed down or eliminated and the match would’ve improved. The random crowd brawling didn’t have much of an impact. Robinson’s dive was aesthetically pleasing but not worth it since he hurt himself more than he hurt Moxley. All the random head biting to draw blood was cheesy and lacked the intended emotional reaction, especially since Mox isn’t Freddie Blassie. And even though the crowd was very much behind Robinson here as he fought so differently compared to his usual self, there still wasn’t much catharsis or overall depth to the match.

One thing I definitely would’ve changed was how Moxley’s legwork didn’t play too much into the finish when it should have. Having Robinson tap out after getting his leg demolished so much would’ve been more in line with the match’s story and with New Japan’s wrestling style. The pieces were all right there right in front of both of them but instead of putting them in the right order Moxley forced a square piece into a round hole with some ‘finisher out of nowhere’ shtick like he was playing Randy Orton.

If we compare this match to Moxley’s body of work in WWE, it’s pretty impressive. But if we compare it to what else was out there in New Japan in 2019…meh. It wasn’t a bad match but it could’ve been better. I know some people were just happy to see Moxley wrestling how he wanted instead of how someone else wanted to wrestle.

But wrestlers, like artists in different media, have strengths and weaknesses and excel in some styles over others. Ribonson was in his comfort zone for the most part and brought out a different side of himself to make Moxley’s debut feel special.

And yet, Moxley just didn’t really come across like a good fit for New Japan, at least not here. He would go on to have much better NJPW matches with the likes of Shingo Takagi and Tomohiro Ishii. But if this match was any indication of what Mox would be like in New Japan, then his whole career was more built on its novelty than any sort of career advancement.