When one thinks of the term “pro-wrestling”, different images might come to mind.

Some might think of two grapplers trying to throw each other to the mat and then make the other tap out with some punishing hold. Others think of wacky characters performing a routine and showing off their over-the-top personalities. And then there are those that want to see human being defy reality and/or gravity. This is an example of that third image.

TNA/IMPACT tried to establish itself as the #2 brand in the US following the end of the Monday Night Wars. It sought to create an alternative to WWE by pushing action to the forefront, in line with both its brand name (Total Nonstop Action) and the action-heavy philosophy of the SpikeTV channel that hosted them. And one of TNA’s best examples of action above all else was this bizarre hybrid of wrestling and stunt work, But was it really as good as everyone has said? Read on to find out.

TNA’s X-Division was basically a cruiserweight/junior heavyweight division but without actual weight limits. It wasn’t about restrictions; it was about letting anyone, regardless of size, show off their skills, athleticism, and daredevilry. That’s why so many high-flyers found their home in the division and how someone like Samoa Joe, who definitely wasn’t a cruiserweight, could wrestle for the title.

Despite the show’s name, Final Resolution took place in January. Much like New Japan’s Wrestle Kingdom, this show tied up storylines and feuds from the previous calendar year. And one of the biggest ones surrounded the X-Division title. All three men in this match were either former or the current X-Division champion. All of them had made waves with their incredible wrestling skill and innovative offense (Petey Williams gets a special recognition here since he’s the guy that popularized the Canadian Destroyer which is now ubiquitous, but back then it was actually special).

To see which of these three was the best, the X-Division Championship would be defended in an Ultimate X match.

For anyone unfamiliar with Ultimate/Elevation X, it’s basically a wrestling match combined with tightropes. Four of the six corners in TNA’s ring have big pillars attached two long cables extend to opposing corners in a crisscross pattern. In the middle is the title/contract/object to be obtained. So not only do the wrestlers have to fight each other but they also have to climb up the turnbuckles and scale the ropes towards the middle to grab the title…all while someone else might try to pull or knock them down.

It’s basically pro-wrestling meets stunt work with a much heavier mix of the latter over the former. And yet, it was considered a revolutionary idea at the time, and TNA themselves have argued that this might be the best Ultimate X match ever. But with the wrestling landscape changing so much afterwards, let’s see of this match’s reputation is still well-earned.

This match originally took place on January 16th, 2005 at TNA Final Resolution. It was rated ****1/2 out of five by the Wrestling Observer’s Dave Meltzer.

This is for Williams’ X-Division Championship. The match starts off with coordinated attacks from all three wrestlers on each other. Williams rakes the eyes of both Sabin and Styles and then runs around the ring as Sabin chases him. Williams ends up caught between Sabin on the ropes and Styles behind him and then then double-team him with tandem offense. Williams rolls to the floor leading to Sabin and Styles doing some chain wrestling. Styles blocks some running attacks from Sabin and tries springboarding/jumping up to the tightropes but they’re too high up. Williams pulls Sabin to ringside on a charge and Styles takes advantage with a suicide dive onto both of them.

Styles climbs one of the posts but Sabin cuts him off, only for Sabin to hit back with a top-rope dropkick. Sabin jumps onto the tightrope and makes his way towards the title, only for Williams’ manager Scott D’Amore to interfere, allowing Williams to pull him down. Moments later the referee ejects D’Amore so Williams goes after both of his opponents right away. he hits Sabin with a vertical/back suplex combo, kicks Styles back to the floor, blocks a comeback from Sabin, and locks Sabin in a Sharpshooter (because, Canada). He lets go when he sees Styles reaching the tightrope and then pulls him down, ducks a head kick, and hits a German suplex. Williams forgets there’s no pinfalls in this match and covers by putting Styles in the tree of woe and standing on his crotch.

Williams maintains control with more counters until Styles counters a charge with a Pélé kick. Styles and Sabin pull each other down from a corner until Styles lifts Sabin into the electric chair position. Williams starts climbing, pulls himself onto the tightrope, and then all three guys go down in a standing Tower of Doom spot, with Williams countering a powerbomb with a midair Frankensteiner. 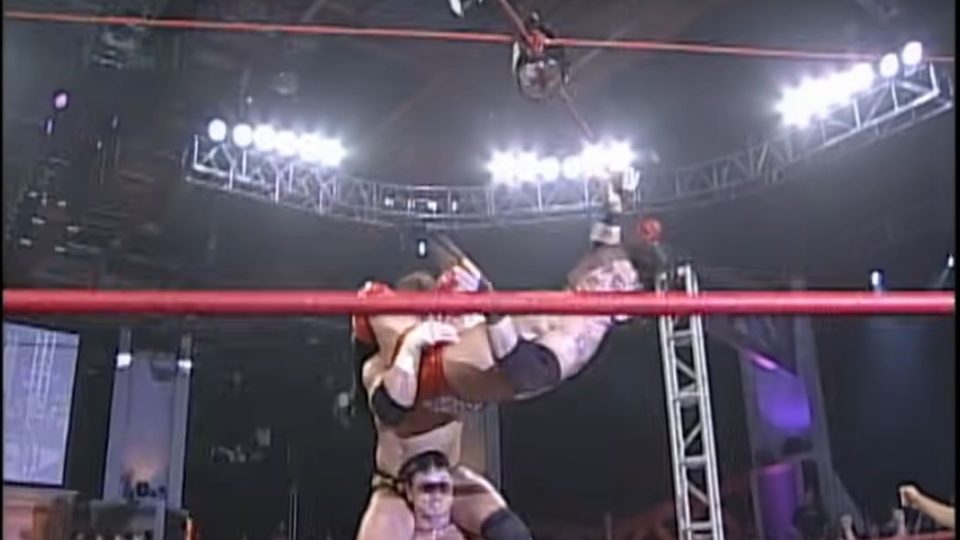 Styles and Williams get up first and Williams hits a Russian leg sweep. They both get up soon afterwards and cross the same tightrope from opposite corners. They kick each other as they’re both suspended in the air until Williams wraps his legs around the X in the middle. Styles tries pulling Williams down but Sabin pulls Styles down. Williams just hangs there as the other two wrestlers fight each other. Styles knocks Sabin down and goes for a springboard forearm. He misses as Williams sits up but Williams still falls down without the title belt.

Sabin goes up this time and then Styles goes after him from the same corner. Styles goes for a powerbomb but Sabin counters with another midair Frankensteiner. Williams charges at Sabin but Sabin kicks with a spinkick. Williams counters back and teases the Canadian Destroyer. Sabin escapes and teases his Cradle shock finisher. Williams counters that and puts Sabin in the inverted DDT position, only for Styles to springboard into his own Phenomenal DDT. All three guys go down. 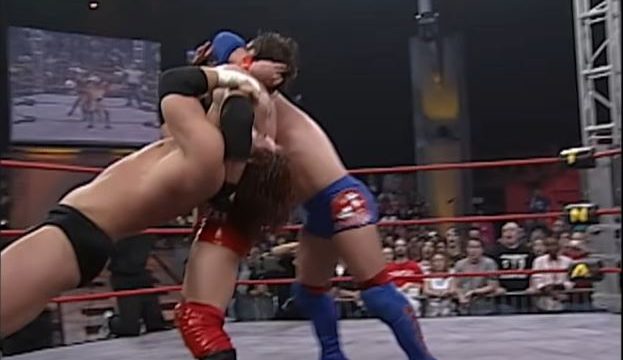 Styles gets up first and makes his way towards the title belt. He gets 2/3 of the way there when Sabin hits a springboard dropkick and Styles crashes down to the mat. Sabin gets up but Williams rushes him and they both fall to the floor. After a brief pause, Styles and Williams both climb the same post, brawling as they climb until Williams smashes Styles’s arm and shoulder through and into the post. Styles briefly ends up hanging by his forearm and then falls to the floor in pain. Williams goes after Sabin but Sabin counters with his Cradle Shock finisher. Sabin climbs up and gets close to the title but Styles pulls him down. Styles goes for the styles Clash but Sabin counters with a triangle armbar. Fantastic counter. Styles tries countering with a deadlift powerbomb but Sabin maintains his hold, until Styles somehow powers through into a successful Styles Clash.

Despite having a bad arm, Styles manages to get into the tightrope. He gets fingertips away but then falls down from the pain in his arm. Williams takes advantage with a Canadian Destroyer on Styles and a running counter DDT on Sabin. Williams goes to climb but then Sabin cuts him off and hits a Razor’s Edge into the turnbuckles. Damn. After a minute, both Sabin and Williams climb the tightrope. Both of them reach the middle. Then they start pulling on the belt itself. Both are hung up as they play tug-of-war with the belt when suddenly, Styles springboards and grabs the title from both of them. Styles steals the title! Styles wins the match!

I had my reservations about this match at first because I thought it would be 90-100% stunt work and no actual in-ring competition. What we got instead was an actually compelling match that actually built towards the climbing spots and featured some kind of actual progression. I know this is clichéd but the match lived up to the TNA moniker without a doubt. This was all action and no boredom. They started off hot and maintained that same pace and level of energy until the very end. For anyone out there that loves frenetic matches and death-defying spots, you’ll love this match.

With the X-Division being more about pushing the limits, all three of these wrestlers did just that and more. All three guys came up with creative offense and interesting strategies to try and keep each other down long enough to climb the tightrope. With each moment of interference all of them realized that they had to go further and hit harder. There was a constant sense of worry from all three of them. Not only did they have to worry about out-wrestling each other, but they each one of them had to figure out, “how am I going to get that title?” You could tell that none of them were comfortable here, and when you take someone out of their comfort zone you get higher risks and more desperation. And so, all three guys just spammed bombs on each other hoping something would work.

But beneath the chaos there was a glimpse of strategy from Williams, who locked Sabin in a sharpshooter and attacked Styles’ arm. He got little mileage out of what he did to Sabin but he got plenty out of Styles because Styles sold it so well by being unable to hold up his own body weight, much less reach out and grab the title belt. Williams had great ideas here; it’s a bit unfortunate that he didn’t get more mileage out of them because following those strategies more fully would’ve made the match even better.

But above all else, this was an exercise in wrestling creativity. Three-and-four-man matches run the risk of becoming too chaotic and nonsensical if the wrestlers involved don’t work hard to lay things out coherently. To avoid that, all three of these wrestlers built this match around coordinated two-on-ones, high-spots affecting all three, and constant interference on each other. That made the match really fun to watch, especially since they were all pushing each other and themselves to the limit.

That creativity also extended to how they worked the stipulation. This wasn’t just a constant scramble to climb the ropes; each wrestler had to earn the chance to climb by wearing each other down. That way the moments that took place above the ring felt meaningful. There was greater payoff in having a few moments on the tightrope instead of spending over half the match up there.

I think this match was great and it still holds up well almost two decades later. It was exciting, unpredictable, clever, and filled with action. It was definitely an unusual gimmick, but these three wrestlers worked incredibly well within the parameters they were given.

The match could’ve been better without the shoehorned interference from Scott D’Amore that had no impact on the match whatsoever and from Sabin actually struggling to climb in the same way that Styles did. I know these are minor nitpicks, but even tightening up slight loose ends can make a big difference, even in a match as airtight and smooth as this one.

Sometimes wrestling fans want something chaotic to watch with their brains turned off. This match more than fits that bill and has plenty to offer. Definitely one of the best matches in TNA history.

The WWE Smackdown Reaction for January 6, 2023