“I am so proud of my brother (Jeff Hardy). He’s in an amazing place in his life, both professionally & personally – I hope you support him. I’m fortunate to vicariously relive our childhood together every single day, thru my 3 boys. I’m a blessed man & we’re both blessed to still be wrestling.” – Matt Hardy

Jeff Hardy’s career has seen him do things that made fans look on in absolute awe. It was from that awe fans witnessed some of the most exciting matches in the history of the WWE. Jeff Hardy’s career has spanned nearly 30 years. It is remarkable to see him take some of the bumps he’s taken, some of the personal demons that have been part of his life, to still see him competing today. But to appreciate where he is, it is important to look back at where he was. 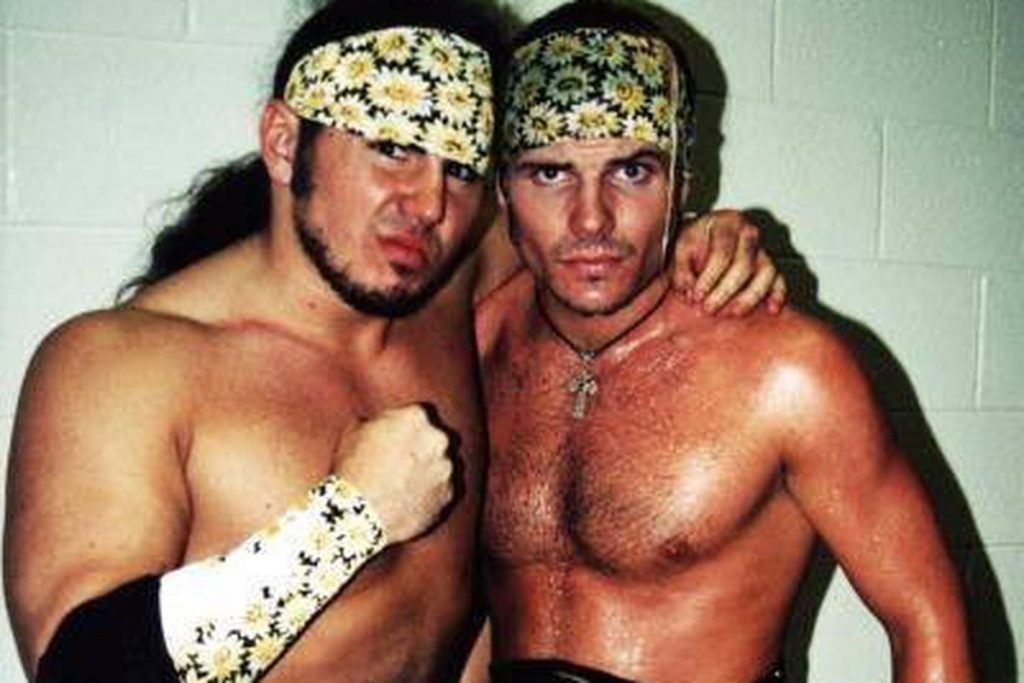 Hardy’s career began in 1992 when he and his brother Matt would come together to create a promotion of their own. The Trampoline Wrestling Federation was the promotion to which both the Hardy’s and their friends would emulate the moves they would see on television. After years the promotion would evolve into the Organization of Modern Extreme Grappling Arts (OMEGA). The promotion involved the likes of Caprice Coleman, Shane Helms, Shannon Moore, and Steve Corino. While this was taking place, both of the Hardy’s would be enhancement talent for the WWF. They would face the likes of IRS and Razor Ramon. Both Hardy’s were paying their dues at a young age with the hopes for a greater opportunity.

After some time, both Jeff and his brother Matt were elevated and reinvented their look. Over the next five years, The Hardy Boyz were part of some of the most memorable matches in WWF/E history. From their battles with The Dudley Boyz to their longstanding feud with Edge & Christian, The Hardy Boyz seemingly did it all upon their rise in the tag team rankings. However, it did take some time for them to find themselves and whether or not they needed leadership. Terri Runnels, Michael PS Hayes & Gangrel all played a part in the on-screen guidance of the team, but it really wasn’t necessary.

Matt and Jeff each had roles, and it is within those roles fans came to appreciate both of them. Fans came to appreciate Matt for his more mat-based moves and his ability to keep a low center of gravity. But for Jeff, it was different. Fans would look on in awe at not only his creativity in the ring but often the reckless nature in which he would compete. It served him quite well in either tag team or singles action.

It would be a WWE Championship ladder match in July 2002 against The Undertaker where fans saw a different side of the Charismatic Enigma. For fans who don’t recall this match, a young Jeff Hardy took beating after beating the Deadman when it appeared as though Jeff Hardy was about to win the match. Sadly, it didn’t happen for Jeff that night. Despite coming up short in their match, Jeff earned the respect of The Undertaker.

However, as quickly things go up, they also come down. This was the case of Jeff Hardy. On April 22nd, 2003, Hardy was released from WWE. The reasons tied to it were extracurricular activities that essentially influenced his performance in and out of the ring. He gave other reasons which likely contributed to his early departure from the company.

After his departure from the WWE, Hardy would join TNA. It was during this time that he would tap into other facets of his personality creatively. His band performed his theme song, and it was also a chance for him to reinvent himself while with a new nickname in the Charismatic Enigma but still held the death-defying qualities moves that he had long been connected to. But, sadly, the issues of failure to meet his contractual obligations would lead to his departure from the company.

Whatever was old was new again. Following his departure from TNA, Hardy would return to the WWE alongside his brother Matt reforming the Hardy Boyz. After a brief time together, Jeff would once again pursue individual accolades. Whether it was the Intercontinental or WWE World Championship that he first won at Armageddon 2008, Jeff Hardy was once again on top of the WWE world. However, injuries would eventually mount up, and Hardy would depart the company after a few years when his contract expired in the summer of 2009. This time, it wasn’t due to issues caused in the past, as he didn’t depart under bad terms.

Over the next seven years, Hardy would once again compete for TNA/IMPACT Wrestling. Jeff Hardy embraced change, whether it be as a face or a heel, a tag team or singles. He would invoke the ‘Willow’ character that would dawn a mask and originate in the Hardy brother’s promotion OMEGA years earlier. The character came about because Jeff Hardy could no longer work for Dixie Carter due to her backstage politics. Willow, however, provided a shield for Hardy to hide his identity and yet still entertain audiences.

Over the final few years in IMPACT Wrestling, Jeff and Matt once again reformed their longstanding tag team. In fact, to compliment Broken Matt Hardy, Brother Nero had emerged. Nero is Jeff’s middle name, and much like his invigorated older brother that had found a new sense of meaning with his persona so did, Jeff.

Their time together in IMPACT came to an end and what lay ahead for the duo was something special. The Brothers Hardy would square off against a tandem long compared to them in the Brother’s Jackson. Nick and Matt Jackson would face them in Ring of Honor. It was certainly a match that they would long remember.

However, that same weekend it would also be a time when the Hardy’s would come back home. After being away from the WWE for seven years, Matt and Jeff Hardy would return to the company, much to the surprise of those in attendance. It was one of the loudest crowd reactions in WrestleMania history. In the process, the duo would recapture the Tag Team Championship upon their return. As quickly as the duo would come together, they would also pursue other opportunities independently.

For Jeff, in particular, we would see him capture the United States Championship and the Intercontinental Championship. It would be those championship title reigns that recaptured a time when fans remember just how effective the charismatic enigma could be in the ring. Here we are now with Jeff proving once again that win or lose fans will gravitate to him. They want to see him succeed. Fans are well aware of the past issues he has had both in and out of the ring.

At 44 years of age (as of this writing), Jeff Hardy is proving to be just as effective as men half his age. Fans are engaged in everything he does in the ring. With each risk brings back memories of a time fans remember team extreme and creates new memories for fans that didn’t see him and Matt rise to fame back in 1998.

Last month he was on the cusp of defeating Seth Rollins to win the men’s Survivor Series match. Fans were engrossed in everything he did in that match and the matches a few months back with Karrion Kross. There was no sure thing about a win against Jeff Hardy at this point in his career. It is quite fitting, actually. For Jeff personally, there was no sure thing. It has been a battle to find a balance personally and professionally. Thankfully, Jeff Hardy is living for the present one that he and his family can be proud of.