One of the biggest talking points in WWE in 2018 was their show ‘Evolution’. It was WWE’s first show composed entirely of women’s matches. It was a big gamble, and whether it paid off or not depends on your point of view.

On one hand, there has not been another women’s only PPV in WWE since, with rumors circulating that it was both a ratings and commercial flop for the company. On the other hand, it showcased one of the most memorable women’s matches in many years. In fact, if we take the Wrestling Observer’s star ratings at face value, one of those matches (and the one we’re revisiting today) was, and still remains, the highest-rated women’s match the history of women’s wrestling in North America.

But is it still that good now? Let’s find out.

Today we look back at the Last Woman Standing match between Becky Lynch and Charlotte Flair from WWE Evolution.

During the second half of 2018, Charlotte and Becky were embroiled in a deep and bitter feud. At SummerSlam two months earlier, Lynch nearly won the SmackDown Women’s title but got beat by Charlotte who capitalized on a sudden opportunity to win. It was obvious to many people that Charlotte was intended to be the centerpiece of that division, but Becky wanted none of that and attacked Charlotte after the match. Although she was supposed to be booed for this cheap-shot, she was cheered uproariously instead. Fans loved Lynch so much more in that moment and wanted her to be the champ instead. Thus began the gradual push of Becky Lynch into one of the most popular wrestlers in modern WWE history.

As part of that ongoing feud, Becky and Charlotte met two more times after SummerSlam. At Hell in a Cell 2018, Lynch pinned Charlotte to win the title and then refused a post-match handshake. Then at Super Showdown three weeks later, Charlotte beat Lynch by disqualification when Lynch hit her with the title belt while Lynch was locked in Charlotte’s submission finisher. To finally settle things, it was determined that the two women would face off at WWE Evolution, the company’s first-ever women’s-only PPV, in the first-ever Last Woman Standing match.

This is a Last Woman Standing match for Becky’s SmackDown Women’s Championship. There are no pin-falls, submissions, count-outs, or disqualifications. It was originally rated ****3/4 by the Wrestling Observer’s Dave Meltzer, which is his highest rating for a WWE women’s match ever. It was also rated ****1/2 out of five by TJRWrestling’s John Canton as well. Let’s see how well it holds up.

The bell rings and the crowd are firmly behind Becky. They block and duck some early strikes leading to a standoff, only for Charlotte to shove Becky down and act arrogant like her father. Becky escapes a slam and clotheslines Charlotte in return. Becky knocks Charlotte down again and lands some leg drops and elbows for a four-count from the referee. Charlotte counters a backslide with a neckbreaker and goes for a whip but Becky reverses. Charlotte counters that with the rope flip her dad did many times in the 1980s, lands a shoulder block, and goes to the top rope but gets slammed off it. Becky lands an overhead Exploder suplex for a three-count but then misses a second-rope dive and eats a big boot. Becky blocks a corner charge and tosses Charlotte out of the ring as the crowd starts to become more split between them.

Charlotte gets up ringside as Becky pulls out a kendo stick and starts wailing on her. After six shots, Charlotte grabs the stick but gets kicked in the gut as Becky looks for and finds a chair. The two women stare daggers at each other from opposite sides of the ring and throw around a dozen chairs into the ring. Charlotte follows by pulling out a table, much to the fans’ delight, but Becky sprints over and elbows her before she can set it up. Becky tries to drag Charlotte into the ring but Charlotte counters with an Exploder of her own for a five-count. She smashes Charlotte with a steel chair several times outside the ring and then throws her onto the pile of chairs inside the ring. As the ref counts up to six, Becky creates three stacks of chairs and then attempts to suplex Charlotte onto them. Charlotte elbows out and counters. Becky gets back suplexed onto those very chairs she set up. The ref starts counting. Becky gets up at the count of eight.

Charlotte brings another table into the ring but Becky counters with a side kick. Charlotte tries to attack Becky with a chair but Becky counters with a huge slam onto the chair stack. The ref counts again and Charlotte gets up at eight. Becky places her onto the table and goes to the top rope. Charlotte cuts her off and the two women trade places. Charlotte dives from the top with a moonsault. But the table doesn’t break. Both women collapse in a heap. Charlotte tries again, this time with a senton bomb. The table breaks this time. Both women get up at the count of nine and then go back down.

Charlotte pulls out a ladder but gets knocked down by Becky, who can barely keep herself standing. Becky somehow has the wherewithal to slam Charlotte onto the ladder and then tries for another Exploder. Charlotte escapes and clips Becky’s knee and starts working the leg. She tangles Becky’s leg through the ladder and then locks in the Figure-8 using the ladder for extra pressure. Becky starts tapping almost immediately. But there’s no submission victories here. Becky desperately pulls herself towards a nearby chair and smashes it into Charlotte’s ankle, breaking the hold. The ref counts again but both women get up at eight. 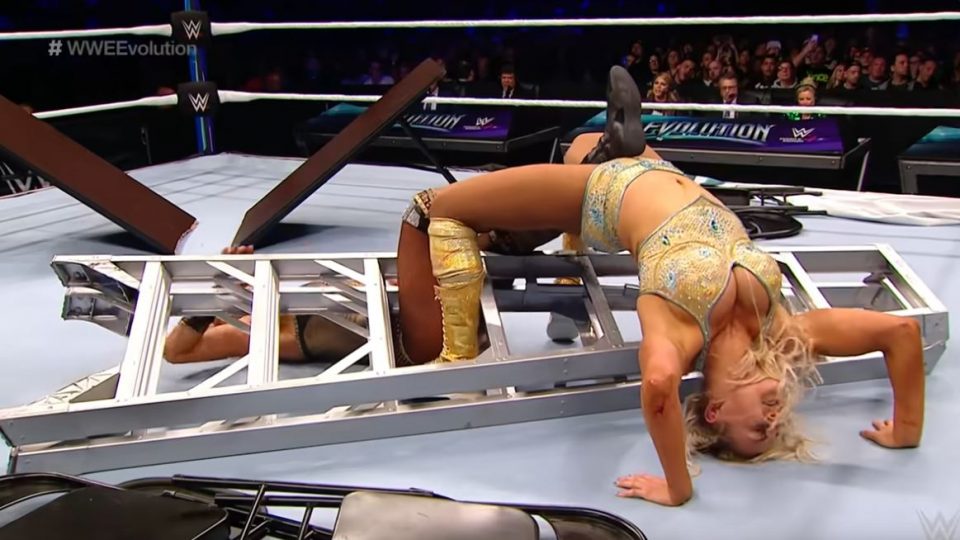 Becky escapes to ringside but Charlotte gives chase, only to get smashed into the steel steps. Becky uses the apron to hold herself up and then smashes Charlotte into the ringpost to keep her from attacking. Suddenly Becky grabs her title belt and leaves through the crowd. But Charlotte chases her down and lands a flurry of knife-edge chops. Becky answers with forearms but Charlotte overpowers her. Charlotte sets up another ladder but turns into a belt shot to the face. Becky places charlotte on the announce table and climbs the ladder…and lands a diving leg drop. Becky gets up first. Charlotte gets up at the count of nine. Lynch punts her in the face, and then tries to bury her under as many chairs as she can find. I have no idea why the ref waits until Lynch is done burying Charlotte to start counting. He makes it to nine once again. Charlotte rises and Becky looks terrified. Charlotte gets revenge with some kendo stick shots and a spear.

Charlotte moves a different table setup earlier as the ref doesn’t count a motionless Becky for some reason. Charlotte goes to the top rope for a moonsault to the floor. But here comes Becky. She cuts Charlotte off…and powerbombs her through that table. The ref starts counting again. Charlotte gets to her knees at six. She struggles and struggles to get to her feet. She’s almost to her feet at the count of nine. But then she slumps back down. The ref reaches ten and calls for the bell. Becky retains!

That was a fun match. They made the most out of the stipulation and had a fun weapons-based brawl. Almost everything was well-executed and the fans helped give this match a much-needed big fight atmosphere. It was important as a historic first-time-ever match that was helped with some creative moments, which alone makes it worth watching at least once.

The main selling point of this match was its unique stipulation, which both wrestlers took advantage of the best they could. It was violent and rightfully so from the opening bell, with all the key spots and control changes being centered on weapons. Both wrestlers endured a ton of punishment, which made both of them look strong in the end. Of the two, I think Charlotte took a more savage beating and in the end, she looked almost as strong as Lynch when all was said and done.

I also really enjoyed how they kept things simple here. There was only one complex spot in the match while everything else was straightforward ass-kicking. The only exception was the ladder Figure-8, which I think was as creative a spot as it was important to the match. It’s always nice to see something relatively new in a match, as long as it isn’t too contrived and is justified by the match’s story. At first, it seemed like that moment was going to become either the key to Charlotte’s victory or the beginning of Becky’s long heroic comeback. But it was neither, all because of a contrived follow-up segment that didn’t really add to the match at all.

Becky spent several minutes selling the damage to her legs following that (supposedly) devastating ladder Figure-8, only to up and start walking away out of nowhere and then engage in an extended and unnecessary crowd brawl sequence as if that damage to her leg never took place. It was a strange bit of inconsistency that just didn’t make sense, especially since that Figure-8 ladder spot was built as a key turning point for Charlotte for the match. That walking away segment added absolutely nothing to the match and instead made Charlotte’s strategy look insignificant. They had a chance to really make Becky look like a heroic underdog for overcoming something so painful but they went in a different (read: worse) direction with a pigeonholed brawl that did nothing but bloat the match’s length.

Another small but still important issue here was that there were at least two times when the ref should’ve been counting but didn’t start until way too late. The first was when Lynch buried Charlotte under some chairs, and the second was when Charlotte was setting up the table for the finish. In both cases, the ref should’ve started counting way sooner because one of the wrestlers was in fact immobile and not on their feet, which was the whole point of the stipulation. Instead, he ran around doing something else, which just seemed silly considering his only purpose in the match was to count to ten, as the commentators pointed out more than once.

I’ll give credit where credit is due: this is definitely one of the better WWE women’s matches of the past two decades. It was unique and the people involved told a solid story. But in the larger scheme of things, I think it falls a bit short. I’ve seen women’s matches that had better wrestling, better stories, better weapons use, and better displays of toughness. With more airtight psychology and less haphazard spot sequencing, I think this match would’ve been significantly better.

Still, as I wrote earlier, it is worth watching all the same. Many fans still put a lot of value into ‘firsts’ in wrestling and this one is no exception. It was unique and had some clever moments that made it stand out. So while it isn’t the best women’s match by any means, it has enough positives to earn a revisit.