This is quite possibly the greatest match in NXT history. It’s a dream match of epic proportions. It’s a legendary match that featured one of the most talented smaller guys in WWE taking on an iconic ex-New Japan star in the latter’s WWE debut match. It was so good that it was undeniable proof that NXT produced better matches than WWE’s main roster, hence the chants of ‘better than RAW’ that came not long afterward.

Sami Zayn was announced to be leaving/being ‘promoted’ to the main roster after being seen as the ‘heart and soul’ of NXT for the better part of three years. As his swansong match, William Regal announced that Zayn would be facing NXT’s newest signee, Shinsuke Nakamura.

The reaction to this announcement was…well…words don’t do it justice:

I think this particular clip might be slightly edited, because when the original announcement took place, the reaction was absolutely NUCLEAR! You couldn’t even hear what Nakamura said, the fans were so excited to see him.

Needless to say this was the textbook definition of a ‘dream match’, especially for diehard NXT fans. NXT had proven itself as the alternative to RAW and SmackDown in terms of in-ring quality, and Triple H showed his eye for talent by signing quite possibly the hottest star outside WWE.

The stars could not have possibly aligned better for NXT fans. Sami Zayn, the heart and soul of NXT, would face a debuting Shinsuke Nakamura, who was considered one of the best professional wrestlers on the entire planet at the time.

This match originally took place at NXT TakeOver: Dallas, on April 1st, 2016. It was originally rated ****1/2 stars by the Wrestling Observer’s Dave Meltzer. The match was rated ***** out of five by TJRWrestling’s John Canton and was named the WWE Match of the Year in his 2016 WWE Johnny Awards column. Now, with the benefit of hindsight, let’s see if this match really was as incredible as everyone said it was when it first took place.

The bell rings and fans are already chanting ‘Holy Shit’ at Nakamura. Can’t say I’m surprised. Nakamura ducks one lock-up and gets a clean break on the ropes, before putting his head in Zayn’s gut to mock him. Zayn dodges some huge strikes from Nakamura and the crowd erupts in cheers once again. Nakamura flips out of an armlock into his own, but Sami counters his way out of that. Nakamura escapes and Zayn lands some arm drags and then he mocks Nakamura. Looks like Zayn has a death wish because Nakamura answers with some stiff kicks and a kneedrop to Zayn’s face for a quick one-count.

They trade waistlocks until Nakamura counters into a grounded armbar. Zayn grapples out and charges, but when he catches Nakamura’s leg on a kick Nakamura enzuigiri’s him with his free leg. Zayn stops Nakamura as he tries his weird corner stomp move, but ends up eating a wheel kick for his efforts. Nakamura puts on a front chancery but Zayn counters into a suplex for a two-count. Zayn lands some corner strikes and a dropkick for two, and then knocks Nakamura off the turnbuckle and out of the ring as Nakamura attempts a dive. Zayn tries to pull Nakamura back into the ring but Nakamura kicks his face in on the apron. Nakamura follows with STIFF knees to Zayn’s head from different angles as the crowd applauds.

Back in the ring, Nakamura lands his ‘good vibrations’ stomp and then charges but Zayn dodges. But Nakamura quickly regains control and lands a big knee lift to Zayn’s stomach in the corner for another two-count. Nakamura goes for the inverted exploder, Zayn lands on his feet and ducks a charging Nakamura, sending back out of the ring. Suicide dive by Zayn. Top-rope crossbody. 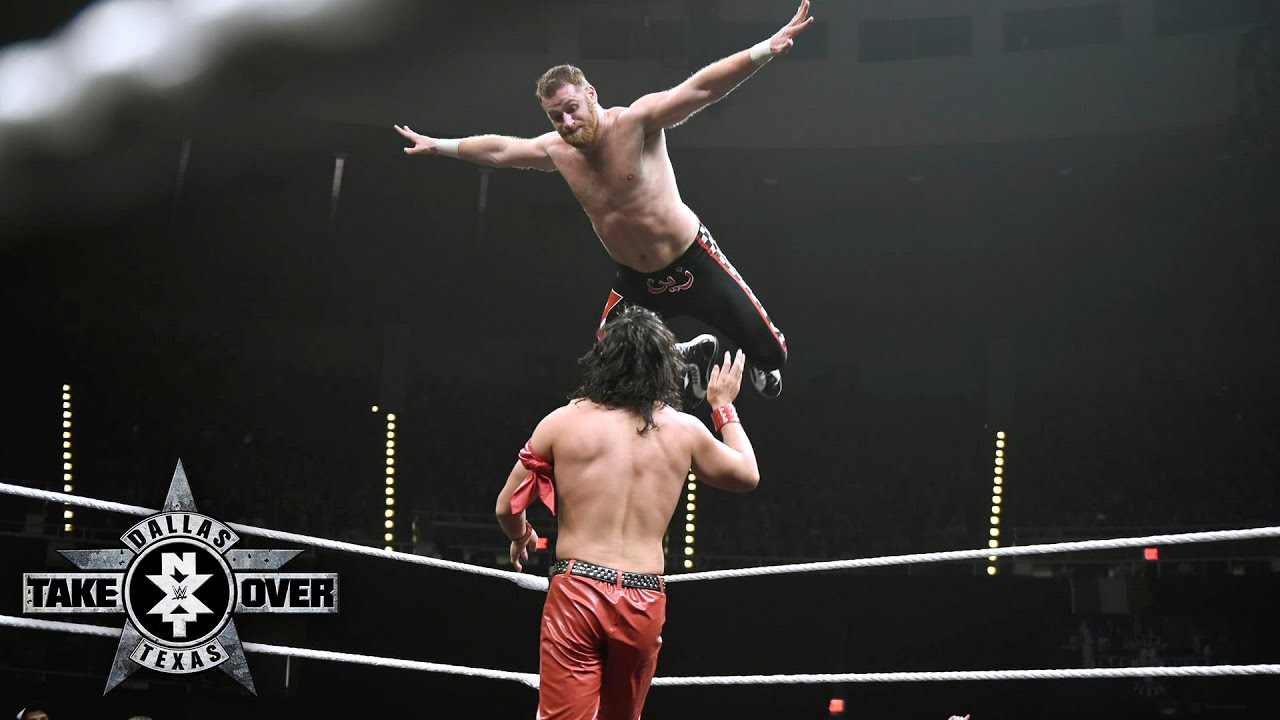 Nakamura kicks out. Zayn tries a suplex but Nakamura knees out of it and follows with more grounded knee strikes. He charges but walks into a Michinoku Driver. Both men get up. They go to WAR trading forearms. Nakamura’s nose starts bleeding. Both men keep hitting each other hard. Standing ovation for both of them.

Nakamura gains the upper hand with some particularly stiff shots. Zayn staggers against the ropes, allowing Nakamura to unload a fury of knee strikes, stomps and kicks on him. Nakamura kicks Zayn mockingly and charges for his finisher. But Zayn gets up and just DROPS Nakamura with a huge clothesline. Followed by a second one. He goes for a back body drop, but Nakamura answers with a knee lift. Zayn goes for another clothesline. Nakamura counters into a flying armbar. Zayn resists with all his might, so Nakamura counters into a triangle hold. Zayn gets a two-count on a sudden pin and escapes by stomping on Nakamura’s head. Zayn fires up with stiff punches and stomps of his own. Nakamura charges desperately, but runs into an STO into a Koji Clutch. Great counter by Zayn. Nakamura rolls over into a pin. Zayn releases the hold. Nakamura gets a desperation enzuigiri.

Both men get up slowly and Nakamura goes for the inverted Exploder but Zayn elbows out. Nakamura answers with a single-leg dropkick and goes to the opposite corner for a charge. But Zayn gives chase and goes for his corner yakuza/Helluva kick. But Nakamura dodges. Inverted Exploder suplex. Kinsha—no, Zayn dodges. Blue Thunder Bomb. Nakamura kicks out. Zayn goes for the ‘through-both-ropes Tornado DDT’ but Nakamura kicks him in the face. The fans chant ‘Holy shit’. Holy shit is right. 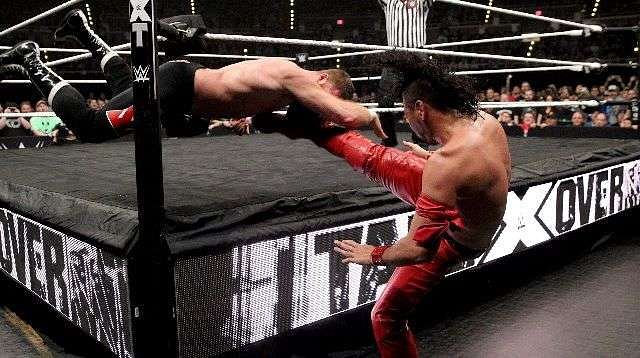 Nakamura goes to the top turnbuckle but Zayn cuts him off. He goes for a superplex but they fight and Zayn falls to the mat. Nakamura charges but Zayn counters. He goes for the corner Exploder but Nakamura escapes by elbowing the ever-loving shit out of Zayn’s neck. Diving knee strike to the back of Zayn’s head. KINSHASA/BOMA YE!!! One, two, three! There’s the match. Nakamura wins!

Post-match, both guys shake hands in respect with the fans giving them a standing ovation.

It pains me to say this, but this was Nakamura’s best WWE match to date. He set the bar so incredibly high here and nothing he has done in the past five years has been on this level. That is both an indictment of how he has been portrayed on the main roster and sheer praise for how fantastic this match was (and still is).

It really did live up to the billing of a dream match. I had doubts that Zayn would be a good opponent for Nakamura but Zayn fought like hell here. He played the role of NXT’s gatekeeper and Nakamura was the gatecrasher looking to start his NXT career on a high note. And boy did he ever. He and Zayn stole the show not just for that particular TakeOver, but for all of WrestleMania weekend.

This match had the perfect combination of everything great about pro wrestling. It featured two wrestlers from different worlds clashing in while having perfect chemistry with each other. Everything they did made sense in the context of the story of the match. Zayn had to fight like hell to try and stop Nakamura; but once he realized that he was fighting a losing battle, he did his damnedest to try and take Nakamura down with him. That translated into a wild ride of incredible pinfalls, brutal back-and-forth action, an insane strike battle that left Nakamura bleeding, and some of the craziest fan reactions I have ever heard.

But is it a legendary, 5-star match? Eh, that’s stretching a bit.

Don’t get me wrong; I loved watching this match when it first happened and I loved re-watching it for this review. But after the immediate rush of excitement wore off with the deciding fall, I was left wishing they had done more in the match. While there was definitely a lot to love here, I got the feeling that both Zayn and Nakamura were just ‘playing the hits’ here.

I would’ve expected Zayn to come in with a strategy since he knew in advance what kind of wrestler/fighter Nakamura was. But instead of applying such a strategy to give Nakamura something to overcome and show skeptics why he was so good, Zayn chose to venture into Nakamura’s comfort zone and just trade bombs with him. In doing so, Zayn fought a losing battle, and to me that was a bit disappointing.

This match lacked the depth Nakamura displayed in his Wrestle Kingdom 10 match against AJ Styles from three months earlier. Zayn fought hard, but not smart. The commentators spent so much time hyping up Nakamura’s martial arts prowess, his training, and the devastating power of his knee strike finisher. If Zayn knew these things were coming, why didn’t he try to take Nakamura’s knee out from the start? Had he done that, Nakamura would’ve had something to overcome in his debut match and it would’ve given his first victory in NXT far more importance.

As an aside, some of the chants were a bit distracting and annoying. It was obvious that they started chanting stuff just to be heard. They chanted generic things like ‘this is awesome’, ‘both these guys’, and ‘this is wrestling’. Well, no shit it’s wrestling. It took away from the match because they wanted to be part of the match without being in the match. And by trying to put the focus on themselves and their ‘wild’ chanting, they took the focus off the two wrestlers in the ring.

While I don’t think this is a historic, 5-star epic, it’s still one of the best matches in NXT history, and that’s saying something. This more than lived up to the hype as a dream match and helped cement NXT as one of the best wrestling brands in the modern landscape. Nakamura gave the fans a taste of what he could do and Zayn went to hell and back to make sure his last match as NXT wrestler would be one for the ages. They tore the house down with their insane near-falls, clever counters (especially Nakamura kicking Zayn’s face in as Zayn dove through the ropes) and frantic pace. And all of this happened in front of a rabid crowd that was CM Punk-in-Chicago-levels of hot.

And yet, Zayn and Nakamura didn’t quite reach that next level of greatness. Especially when compared to Nakamura’s NJPW epic with AJ Styles or his masterpiece with Kota Ibushi. I think a lot of the hype around this match came from the sheer novelty of seeing someone like Shinsuke Nakamura in a WWE ring. It seemed like such a ridiculous idea, yet there he was wrestling Zayn. So while there are some Nakamura matches out there better than this one, it definitely makes for a very fun twenty minutes and I really recommend re-watching it.

Top 10 Wrestling Stories of the Week 8/12: CM Punk Returns To AEW, Kross/Scarlett/Lumis Back in WWE, More