Dave Meltzer once said that Jushin Thunder Liger belongs in every wrestling Hall of Fame for what he has accomplished. Well, Liger’s well on his way to achieving that goal. It was announced this week that Jushin Thunder Liger will be inducted into the WWE Hall of Fame Class of 2020. This is the same Liger that only wrestled ONE match for any of WWE’s brands. Say what you want about WWE’s Hall of Fame; for someone to only wrestle once for your company and spend most of your time wrestling for your competition and STILL be honored into your Hall of Fame speaks volumes to the Beast God’s talent and legacy as a professional wrestler.

To celebrate this rumor-that-will-soon-become-official, let’s look at one of the many matches that made Liger world-famous. This match took place at WCW Superbrawl 1992, and is widely regarded as one of the best opening matches for any PPV in North America.

When it first occurred, the match was rated 4.75 stars out of five by Dave Meltzer of the Wrestling Observer. Let’s see if that star rating is accurate or if it needs revision. Check out previous entries in my 5 Star Match Reviews series right here. 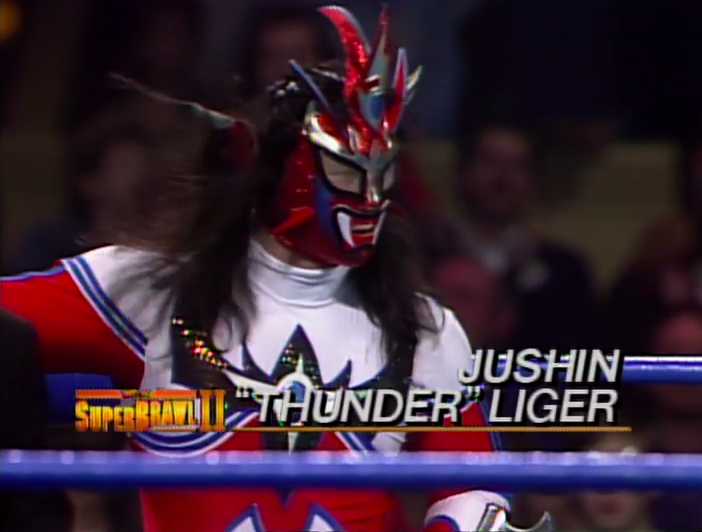 This match took place on February 29, 1992 at WCW SuperBrawl II.

Pillman and Liger exchange arm holds to start. Liger whips Pillman and eats a shoulder tackle from the challenger. A leapfrog and a duck end in a double dropkick from both of them. The crowd cheers and applauds as Pillman hits a drop toehold into a grounded armbar. Liger reaches the turnbuckle and the armlock is broken. He fights back with forearms and whips Pillman into the opposite corner, but Pillman grabs the ropes and hits a picture-perfect headscissors takedown to counter a charging Liger. A dropkick sends Liger out of the ring and Pillman hits a baseball slide to send Liger into the barricade.

Pillman ascends the top rope, but the referee pulls him away, allowing Liger to get out of range for a possible aerial attack. Liger re-enters the ring, hits a single leg takedown and starts working a leg, but Pillman reverses his way out of it. Pillman whips Liger into a corner but Liger escapes, runs to the opposite corner and hits a perfect moonsault press from the top rope onto Pillman for a quick two-count. Now it’s Liger’s turn to dropkick Pillman out of the ring and Liger taunts Pillman with some acrobatics in the ring. The crowd is FIRMLY in Liger’s corner here. 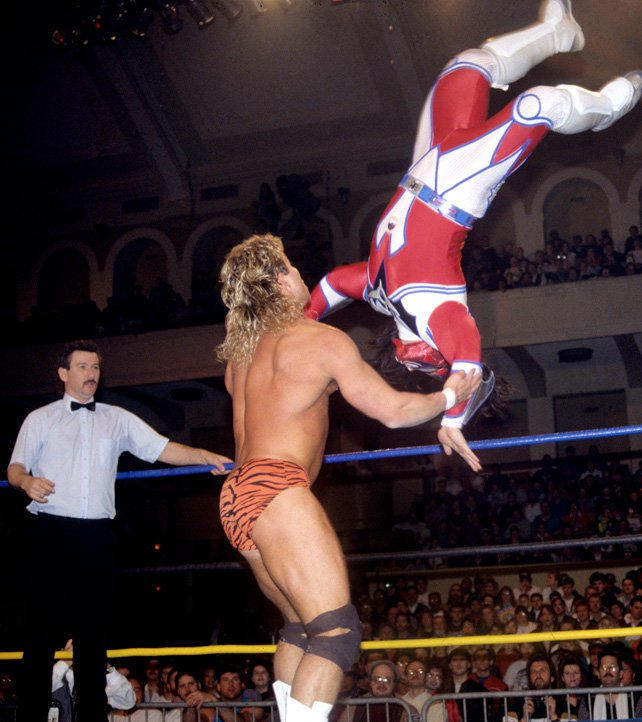 Pillman locks in a sitting abdominal stretch to ground Liger and then transitions into a figure-4 neck lock. Liger wrestles his way out of that and attempts the Romero special but Pillman reaches the ropes. Liger tries the Romero special again after a drop toehold, but Pillman reaches the ropes again. Shoulder tackles to Pillman’s gut by Liger in one corner followed by a running dropkick into another corner. Excellent commentary for this match so far as they’re describing how Pillman had to absorb damage from both hitting the turnbuckle and Liger’s dropkick.

Liger whips Pillman and attempts a shotei palm strike, but Pillman ducks and nails a perfect crucifix pin for another two-count. Pillman whips Liger, but Liger rolls over his back and tries a sunset victory roll for another two-count. Belly-to-back suplex by Pillman gets a 2.5-count. He whips Liger again but Liger dodges a corner charge, causing Pillman to hit the turnbuckle knees-first. Liger being Liger, he immediately starts targeting the legs, turning Pillman’s mistake against him with kicks, wrenches and a knee breaker. Figure-4 leglock by Liger! In the middle of the ring. And he can’t stay on his back because he risks getting pinned. The crowd is willing Pillman on, cheering and whistling wildly. Classic strong-style slap fight with the leglock still cinched in. Pillman refuses to tap as the crowd starts chanting ‘U-S-A’. He manages to roll over, reversing the leglock, but both men reach the ropes.

Pillman elbows Liger away but Liger kicks the knee again and locks in a brutal-looking modified torture crab. But Pillman refuses to give up and eventually gets up and hops on one leg and hits a huge enziguiri out of nowhere. Liger gets up first again and kicks the knee once more He whips Pillman and attempts his tilt-a-whirl backbreaker, but Pillman somehow reverses that into a headscissors that sends Liger flying. Wow, great move.

Pillman charges, but Liger ducks and sends him flying over the top rope to the floor. Liger then shows the world why he’s the Beast God, as he climbs the top turnbuckle and hits a diving senton off the top rope onto Pillman on the floor below! Holy crap, that was amazing. Liger recovers in the ring and tries to suplex Pillman over the rope, but Pillman smashes Liger’s face into the turnbuckle. Springboard clothesline by Pillman! Out of nowhere. Beautiful move. Pillman drags Liger to the ropes and suplexes him over the top rope to the floor. Now Pillman returns the favor from earlier and hits a diving crossbody onto Liger on the floor. This match is intense.

Pillman places Liger against the steel barricade and goes back on the apron and charges, but Liger moves out of the way at the last second. Pillman eats the steel…literally. Liger tosses Pillman back into the ring and attempts a diving splash, but Pillman dropkicks him in midair. What a great counter. Pillman tries a dropkick from the top rope, but this time Liger catches him and they end up double dropkicking each other. Both men are down. It’s anyone’s match now.

Liger places Pillman on the top rope and tries a superplex, but Pillman reverses that and gourdbusters Liger down to the mat. Diving crossbody from the top rope by Pillman. The ref counts one…two…thr—no, Liger kicks out at 2.8. Pillman whips Liger again and prepares for a back body drop, but Liger counters into a kneeling powerbomb out of nowhere for a 2.8-count. Liger tries another powerbomb, but Pillman reverses that into a frankensteiner into a bridging pin that gets another two-count. Excellent wrestling right there.

Liger whips Pillman, but Pillman reverses that into a huge DDT. Pillman pins him, but Liger reaches the bottom rope to break the pin. Another Irish whip ends with both men ducking each other’s clotheslines and a midair collision sends both of them down. Pillman tries to climb the top turnbuckle, but Liger shows his ring awareness and hits the ropes to knock Pillman off balance. Superplex by Liger. He goes for a pin…but Pillman kicks out at 2.8. Liger ascends the top turnbuckle and tries a diving headbutt…but Pillman moved. He got out of the way at the last second. Pillman with a European clutch. He goes for the pin. One…two…THREE! He got it! Pillman wins!

The crowd explodes in cheers as Pillman wins, and he and Liger shake hands and hug post-match in a great display of sportsmanship.

There are two ways to analyze a wrestling match to determine if, in fact, it’s perfect. The first is the emotional response; did the match take you on an emotional rollercoaster? Though I don’t consider this to be a truly emotional match, it did have its moments. The fans played a key role in the match, cheering wildly at certain points and making plenty of noise during key pin attempts. They made so much noise because they witnessed a fantastic match in which either man could’ve won at any time. Both Liger and Pillman looked strong throughout the match, and Liger didn’t look bad in defeat. He took a risk and it went badly for him at the last possible second, and that’s because Pillman had a perfect sense of timing and moved after Liger had already leapt from the turnbuckle.

The second way is the technical way; that is, to scrutinize every move, the selling, the story, and the result to see if any mistakes were made. And in doing so, I found nothing. This was, for all intents and purposes, a flawless match. It had the right length, perfect pacing, excellent-back-and-forth action, and layers of drama. These two men put on a clinic on how to make a seemingly-unimportant match feel important. Every single move was hit flawlessly, and there wasn’t any indication that these two men were working with each other. Despite being more ‘choreographed’ than the classic NWA-style brawls, it didn’t look that way; it still came across as they were fighting each other, which is exactly how a match like this is meant to come across.

This match deserved a full five stars for being technically flawless. Sure the emotion wasn’t as high as many of the best matches of the 1990s, but the execution was simply perfect. Nothing went wrong in any way, and both wrestlers put together the kind of wrestling match most performers only dream of doing. This was one of the main reasons why WCW’s cruiserweight division was so much better than any WWE attempt at a knock-off: the cruiserweights performed in a unique style and benefitted from having people from all over the world come in and show off their skills. If WWE really ever wanted to make the cruiserweight division successful and worth-watching, they should watch and study this match to see two cruiserweight wrestlers doing everything right.