AJ Styles is considered one of the best wrestlers of the past two decades. He’s considered this generation’s Shawn Michaels and has been praised by wrestlers, fans, and critics for years for his incredible talent and catalogue of great matches.

That’s what we’re looking at today. We’ve already revisited at least two of Styles’ greatTNA matches, and now we look at one of his forgotten classics. It’s his singles match with future WWE tag team champion Paul London from ROH’s Night of the Grudges show in 2003.

This is a #1 contender’s match. The winner gets a trophy that proves they’re the #1 contender. That’s all the story these two need. 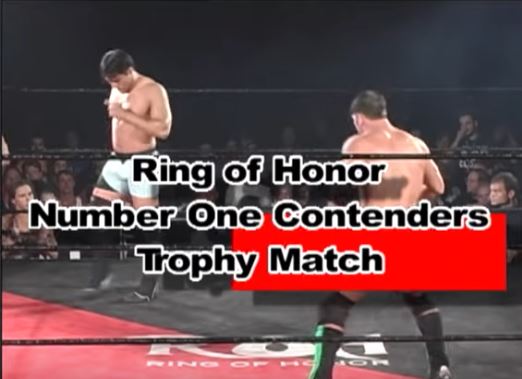 This match originally took place on June 14th, 2003. It was never given a rating by the Wrestling Observer’s Dave Meltzer, but many people – both fans and those within the wrestling industry – have hailed it as a lost classic. After almost twenty years, let’s see how well it holds up.

They shake hands and the match begins. Some great chain grappling leads to an early stalemate. Styles applies an armlock but London counters into a headscissor hold. Styles counters that with a headlock but London escapes both that and a rear waistlock into another armlock. After another handshake, Styles snapmares London and punts his spine which leads to yet another handshake. They do the Greco-Roman knuckle lock and London does the Akiyama roll-through to counter it and increase the pressure on Styles’ wrists. Styles counters into a cross armbreaker attempt but London gets a ropebreak. After another stalemate, Styles single legs London and applies a heel hook but London applies and overhead leg stretch at the same time. A shoving match ensues, and this time Styles rejects another handshake. Styles powers London into a corner and when London tries yet another handshake but Styles no-sells it so London slaps him. Styles slaps back and accepts the next handshake. Neither man budges on a shoulderblock spot so they lock-up and London gets Styles onto the ropes. London cheap-shots Styles with an elbow. They trade waistlocks and other holds until London takes Styles to the mat. Styles bounces back up and the two of them trade armdrags and other counters. A double dropkick spot leads to yet another stalemate and some loud applause.

London offers another handshake but this time Styles accepts and hits an elbow with his free hand. Styles sends London into a corner but London elbows out and lands a sunset flip. Styles escapes immediately and attempts a Styles Clash but London escapes. London sends Styles onto the apron and Styles hits both an elbow and a springboard dropkick. London escapes to ringside and Styles goes for a plancha but London sidesteps and Styles lands awkwardly. He appears to hurt his leg and London capitalizes with a baseball slide dropkick of his own. 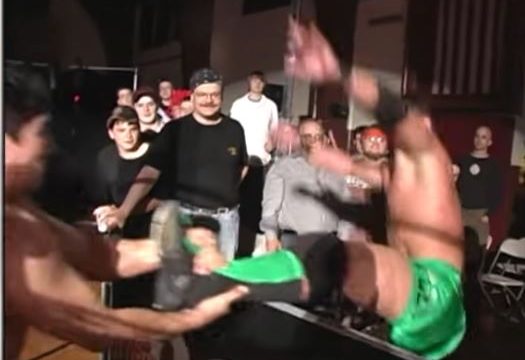 London goes to springboard off the barricade but Styles elbows him first. The two wrestlers hobble back into the ring where they have a chop exchange that ends when Styles hits an enzuigiri. Styles follows with a snap suplex/running neckbreaker combo for a two-count. He hits a corner forearm but London answers with a kick that sends Styles flying backwards. More kicks get blocked. London tanks another enzuigiri and maintains a heel hook as Styles struggles to escape. London ducks another enzuigiri and turns the one after that into an inverted dragon screw. London follows with a knee smasher/back knee stomp combo. Styles hits some elbows and runs the ropes (slowly this time) but London cuts him off easily, and leg trips him. An elbow drop/fist drop get London another two-count so he kicks Styles’ bad leg again. London tries different leglock variations and goes for a vertical suplex but Styles blocks it. Styles tries his suplex lift falling neckbreaker but London counters with a calf kick to the bad leg. Styles hits back with a kneelift using his good leg and a Brainbuster. Both wrestlers collapse. Styles crawls over for a cover but only gets a two-count.

London counters an Irish whip with a back elbow. He slides under the bottom rope and smashes Styles’ bad leg into the ring apron, ax kicks it, and lands a springboard leg drop, all onto that same injured limb. Styles kicks out at two again so London applies another heel hook, followed by an Indian deathlock. Styles manages to out-strike London with clotheslines to escape the hold and the ref starts counting. Both make it up at the count of X and start trading head-shots until Styles drops London with a discus clothesline, which leads to a standing ovation from the crowd.

Both guys make it to their feet and Styles reverses an Irish whip counter with a wrist-clutch Backdrop suplex that gets a 2.6-count. More Irish whip counters. London blocks a corner charge and lands a diving wheel kick for another close two-count. Styles sends a charging London onto the apron and London hits an elbow. He goes for a springboard moonsault but Styles dodges and hits his Phenomenal DDT instead. One, two, London kicks out. Styles hobbles over and lifts London up for a superplex. The two wrestlers exchange punches until London teases a diving Complete Shot. Styles blocks that but London out-hits him and drops him down. London follows with a shooting star press to Styles’ bad leg. London goes to capitalize as Styles writhes in pain when Styles counters a Figure-4 attempt with an inside cradle. One, two, London kicks out. London traps the bad leg and Styles tries kicking out with his free leg but London traps that one too. Figure-4 leglock by London! Styles can’t lie back else he get pinned. He has to sit up, which puts more pressure on his legs. Styles manages a ropebreak, but London takes his time releasing the hold.

London goes for a superplex but Styles hits elbows and head-butts to block it. The two trade strikes in the corner and London tries the Complete Shot again but Styles knocks him down once more. London tries some head-butts Styles counters into a diving sunset powerbomb…and then transitions into a Styles Clash. Styles’ finisher connects! But Styles jams his own knee in the process. He eventually crawls over for a cover but London kicks out.

Styles teases a dragon suplex. London counters with a roll-up. Styles counters that with a wheelbarrow lift into a bridging German suplex. The German lands but Styles isn’t arched like normal. His shoulders are on the mat just like London’s. The ref counts both of them at the same time. One, two, and three! Both wrestlers’ shoulders are on the mat on the three-count.

WOW! That was an awesome, outstanding match! It was way better than what I expected when I first saw the title. I thought it would be just another generic indy spot-fest with choreographed nonsense and high-flying acrobatics. But it was WAY more than that. It had story, psychology, drama, tension, believability, unpredictability, and then some. This is without a doubt one of the best examples of a ‘lost/forgotten classic’ in modern wrestling history.

The match started off as a purely professional contest, as shown with all the handshakes, clean breaks, and stalemates early on. Both wrestlers wanted to keep this match ‘pure’ but that became much harder to do as the match progressed. As both wrestlers hit harder and got more desperate, purity and professionalism turned into personal intensity and deeper psychology. London went after Styles’ leg and hit some creative counters and interesting spots to take away Styles’ ability to fly, run, and hit his biggest moves. London was relentless in targeting Styles’ leg. He went back to it over and over again, which forced Styles to remain on the defensive and made it impossible for Styles to hit anything of his own outside of a few short bursts here and there.

And yet not only was London’s legwork such an integral piece of the match’s story, but it also played a direct role in the finish. London tried to hit some kind of corner spear (that looked like it was botched a few times) before Styles countered it into that sunset bomb/Styles Clash sequence. Then Styles went for a bridging German suplex, but both wrestlers had their shoulders on the mat. In Styles’ case, he couldn’t make a perfect bridge because he couldn’t hold himself up due to the damage to his leg. London’s strategy worked so well that it saved him from suffering a direct loss. It was a brilliant example of wrestling psychology and common sense being applied in a match. Everything came together so cohesively to create a truly compelling and exciting wrestling match.

There were some other great details thrown into the match as well that helped make it stand out. London sold the Styles Clash like it was a big deal. As soon as he realized what Styles was going for, he escaped as quickly as possible. Styles’ leg selling was a bit inconsistent at first – especially with his flying and springboard moves that felt out of place given London’s vicious attacks – but he made up for that by being virtually flawless towards the end. Styles was amazing at hitting match-ending moves out of nowhere but not capitalizing on them right away to sell the damage to his own body. He gave his most important near-falls way more impact and gave the impression that, had he not been so badly hurt, he would’ve won the match with those moves. Even the seemingly-random nonsense early on with the constant handshakes and high-spots were all part of the larger story.

This is the main reason why I review these old and often lesser-known matches: watching a match and being surprised at how great it is. Styles lived up to his reputation but I was blown away by how well London wrestled. I thought that he was just another small ‘spots guy’ that got signed by WWE to do some high-flying wackiness to help elevate their fledging cruiserweight division. I was happy to be proven wrong London had much more talent than what he showed in WWE. He showed technical skill, psychology, personality, and storytelling skill. He had a marvel of match with Styles here. I strongly recommend watching this match simply for the novelty of seeing Styles compete against a guy that showed a lot more wrestling ability than his “big leagues” career was known for.

This match has aged incredibly well and in some ways benefits from being such a hidden gem. It rightfully deserves its reputation as one of the best matches in ROH history and one of the top matches of the 2000s. Its lack of widespread fame means that it hasn’t been ripped off or copied to death, which makes it more unique. It has a nearly flawless final act and a really clever finish that’s both unpredictable and commonsensical. Even though it’s not 100% perfect, I’d put this on a list of top matches any day. I cannot recommend it enough.