AEW and NJPW Forbidden Door is in the books and I will say, it was probably one of the better shows from a purely in ring standpoint that AEW has put on in quite a while.

I’m still frustrated with the lackluster build to the show, but it is what it is. It was a great show match-wise, but I don’t think it did a lot to establish NJPW stars to an American audience due to the buildup leading to the show. If you didn’t know who the guys were before the show, I doubt you learned anything new coming out of the show. I’ll give more in my closing thoughts. Check out John Canton’s in-depth review right here in case you haven’t read it yet. Let’s get into it. 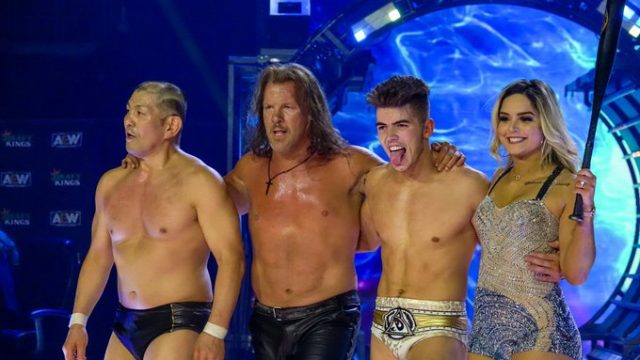 This match was pretty solid. As soon as they added the stipulation of the man advantage, you could tell who was going to get the win here. The man advantage at Blood & Guts (War Games) is usually reserved for the heel team. They seem to be reserving the big Eddie Kingston win for Blood & Guts. Most people I’ve talked to have been against Sammy Guevara joining JAS, but I get it. His singles run just wasn’t working out so it was best to just go back with what worked before. Like I said, solid opener but you knew who was going to win as soon as they announced the stipulation.

In another pretty solid match, FTR became IWGP Tag Team Champions by defeating Roppongi Vice and United Empire. Dax Hardwood went out during the match with an apparent injury. I’m not sure if it was a work so he could build to the babyface comeback or if he was legit injured and worked through it. Either way, it was a great match.

I’m guessing FTR is doing the Kenny Omega gimmick of last year where they’re belt collectors. It seems to be leading to a match with the Young Bucks for all the gold. I don’t mind it. I love FTR. I honestly think they’re the best tag team in the world at the moment so giving them the IWGP Titles is probably a good call. United Empire were pretty good in defeat, but I think most people saw this coming. FTR is firing on all cylinders right now. Hopefully it culminates in defeating the Young Bucks at All Out.

#3: CLAUDIO CASTAGNOLI IS ALL ELITE

As soon as Bryan Danielson bowed out of this match due to injury and announced a replacement, you had the feeling it was going to be the former Cesaro. Bryan talking about it being the “only guy he trusted” further leaned into that idea. Some thought it would be Johnny Gargano, but Claudio was the best choice here. He got a pretty big pop from the fans in the United Center as he came out to face Zack Sabre Jr.

The match went nearly twenty minutes and it was a showcase of what Claudio is capable of if given the chance. I felt he didn’t get nearly the push he deserved in WWE, but he still had a pretty great career there. I’m happy he has found a home in AEW. He’s a perfect addition to the Blackpool Combat Club as he fits their mold. It makes Blood & Guts that much more interesting that’s for sure. With CM Punk, Bryan Danielson, and now Claudio Castagnoli under contract, Tony Khan seems intent on seeing how far he can go before Eddie Kingston explodes and I’m here for it (if you don’t know, google it kids). 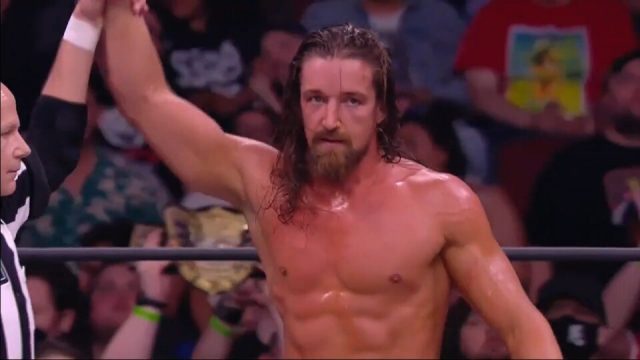 This was the match I was most looking forward to. Jay White is one of the hottest superstars in the world right now. Seeing Okada in a big match on a national stage was a treat. Adam Cole and Hangman Page were great as usual, but I never felt White’s reign was in doubt due to the fact they just put the belt on him two weeks ago.

The match ended awkwardly due to Cole getting knocked loopy it seems. It may be a concussion, but they rightfully went home immediately so as not to cause further damage. It was great for the time given. I want to see more of Jay White whenever he is available. A proper Jay White and Adam Cole story could be exciting. That Blade Runner is such a fluid move that he can literally hit out of nowhere.

.@JonMoxley makes the walk! #AEW Interim World Championship on the line at #ForbiddenDoor right now! It’s not too late to order the PPV! #AEWxNJPWpic.twitter.com/V184QKqgZZ

Jon Moxley defeated Hiroshi Tanahashi to become AEW World Champion for a second time. Much like Drew McIntyre in WWE, Jon Moxley experienced his first run as Champion largely with no fans to share the run with. I’m all for giving him a second run, with fans even if it is short-term (and interim) until CM Punk returns. The match was good. Tanahashi looked a lot better here than he did on Dynamite last week so I’m thankful for that. Once Jay White retained the IWGP Title, this wasn’t in doubt. I thought there was an outside chance they could swap World Titles but there was no way Tony Khan wasn’t having a World Champion on his show and that’s the right call.

Moxley has wanted this match with Tanahashi since he got to AEW so I’m glad it finally happened for him. Given the issues Moxley went through late last year with rehab, I’m glad he got this moment last night. Nobody in AEW deserves it more, that’s for sure. Congratulations, Champ.

PAC WINS ALL ATLANTIC CHAMPIONSHIP: I was pleasantly surprised. I felt Miro would win, but I thought Malakai Black deserved it more. I won’t complain about a Pac victory as I’ve felt he needed better booking for months now. Good surprise win. I like it.

DUDES WITH ATTITUDES DEFEAT BULLET CLUB:If you thought there was any chance a team with Sting on it was going to lose, you haven’t been watching the product. The match was good, but nothing that stands out. Darby Allin deserves to be in more solo programs. I feel like he’s been handicapped by his alliance with Sting for too long.

THUNDER ROSA RETAINS THE WOMEN’S TITLE: Anybody who’s talked to me knows how I feel about Thunder Rosa’s Women’s Title reign. It’s been lackluster. She’s always delivered on Pay Per View, but it feels like she isn’t a priority when it comes to airtime on Dynamite. That needs to change moving forward or get the title on someone you will invest the time in.

WILL OSPREAY DEFEATED ORANGE CASSIDY:The match was what I expected. A good match, but it still feels like a wasted opportunity. You have Will Ospreay on a national stage and he gets Orange Cassidy instead of somebody like Ricky Starks, Ethan Page, and Jay Lethal. These guys are in your locker room and the constant misuse of all-star talent frustrates me to no end. Starks should be on every PPV. Good win for Ospreay I guess, but it won’t mean much in a week.

AEW and NJPW Forbidden Door was a good in-ring show, but a horribly booked and built-up show. AEW Stars were 6-2 against NJPW stars on the main card. NJPW stars got four wins on the main card and two of those were because they were teaming with AEW talent (JAS with Suzuki and Sting/Darby with Shingo). It’s starting to feel very reminiscent of the Impact partnership where AEW will give you the exposure of being on a national stage. They just won’t allow you to appear like you’re on their level. With guys like Kota Ibushi and Tetsuya Naito missing, this largely felt like the NJPW B team aside from a few notable names.

Like I said earlier, from a purely in-ring perspective, it was one of the best shows of the year. However, if you’re going into that show not knowing much about NJPW, did you come out of it feeling like they were on par with the AEW talent? If you did, good for you. I didn’t and that is what these partnerships are supposed to bring. Tony Khan has an easy time convincing companies like AAA, Impact, and NJPW of letting his talent win their titles but have you noticed nobody from another company has ever won an AEW title? Think about that. Anyways, another review in the books and we are off to Money in The Bank next weekend. Until next time.