A lot of the wrestling world is talking about Gunther, a.k.a. WALTER because his match with Sheamus at WWE Clash at the Castle was universally praised and for very good reason.

For some fans that was their introduction to the wrestler formerly known as WALTER. For others, it was the continuation of WALTER’s great match streak that had been going on for years. And once again we’re going back in time to see how far back that streak of his stretches.

Earlier in the year, Jordan Devlin (now known as JD McDonagh in WWE NXT) faced WALTER and lost badly. So badly that he hadn’t suffered such a devastating loss in 22 months. He admitted he wasn’t prepared for WALTER and when WALTER chopped him, he thought his heart stopped.

One of Devlin’s friends tried to get revenge for Devlin on WALTER but he ended up being demolished in the same way. at the same time, there’s an interview shown where one of the OTT interviewers compared stepping into the ring with WALTER with Frank Bruno describing how terrifying it is being in the ring with Mike Tyson. Nothing could prepare Bruno for Tyson’s power, and nothing could prepare Devlin for WALTER’s power.

It was as close to David vs. Goliath as it comes in pro wrestling. Devlin was a small agile man taking on a monster that hit hard and without guilt or remorse. So would the smaller guy win, or would WALTER run him over like he did everyone else?

This match originally took place on August 18th, 2018 at OTT WrestleRama 2. It was rated ****1/2 by the Wrestling Observer’s Dave Meltzer.

This is for Devlin’s OTT World Championship. The bell rings and Devlin gets in WALTER’s face and WALTER mocks him. They lock-up and Devlin teases a chop, which angers WALTER and he attempts his own corner chop but Devlin escapes. They fake each other out and Devlin goes for a double-leg but WALTER counters first into a single-leg crab and then a full Boston crab but Devlin reaches the ropes. Devlin lands some calf kicks and dodges WALTER’s big chops but WALTER takes control with a Greco-Roman knuckle lock. Devlin answers with more calf kicks and manages to get WALTER to bridge and then gets on top of him and knees him in the kidneys. WALTER counters and gets two two-counts off the bridging knuckle lock and then stomps on Devlin’s face. Both men get to their feet and trade holds until WALTER leapfrogs over Devlin and lands a big boot. Devlin tries to kick WALTER from a grounded position but WALTER answers with more kicks and stomps for a one-count. WALTER lands a big slam and a kneedrop but Devlin escapes him before he can pin. Devlin tries different strikes against WALTER but WALTER shuts him down with chops each time. Devlin lands some desperation slaps and clotheslines but WALTER simply out-powers him, places him on the top turnbuckle and chops him even harder. An over-the-ropes suplex gets WALTER a two-count.

WALTER applies a Boston crab but Devlin reaches the ropes. Devlin lands a flurry of elbows while ducking WALTER’s chops. Devlin charges into the corner, WALTER blocks and sends Devlin to the apron, Devlin goes for a springboard attack but WALTER catches him and locks in a sleeper out of nowhere. WALTER follows by switching into a huge German suplex for two. WALTER sends Devlin into the corner and they trade counters until Devlin lands a backstabber followed by a slingshot cutter for two. Devlin goes for a vertical suplex but WALTER uses his size advantage to resist. That\s followed by an intricate ducking and blocking sequence that ends with Devlin landing a victory roll into a double foot stomp to WALTER’s chest. Great sequence. WALTER keeps hitting elbows so Devlin answers with more kicks to the head. WALTER answers with a sleeper, Devlin reaches the ropes, and WALTER answers that by trapping both arms and hitting a German suplex. Except Devlin lands on his feet and lands another head kick. Devlin attempts another suplex but WALTER counters with a huge chop and a suplex of his own for two. 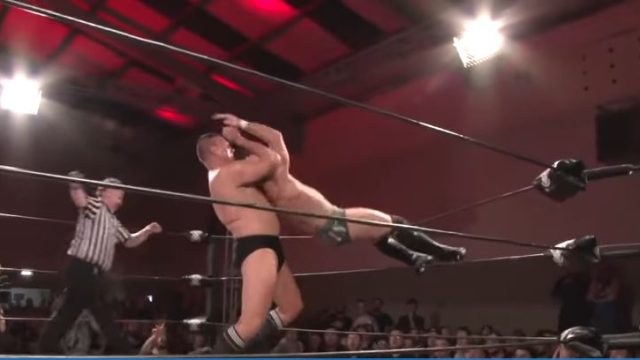 The fans rally behind Devlin by chanting ‘you can beat him’. WALTER gloats some more and Devlin goes for some clotheslines, but WALTER counters one of them with an uranage slam for two. Both men trade hard strikes some more until Devlin ducks WALTER and sends him over the rope and then lands a dropkick. Devlin goes for a running kick from the apron onto WALTER but WALTER catches him and throws him around the ring and then into the fans’ empty chairs. WALTER clears some chairs and goes for a powerbomb onto the floor but Devlin saves himself by grabbing the ring ropes. Devlin lands two big face kicks dropping WALTER and then lands a top-rope moonsault to the floor. Wow, that’s crazy.

Back in the ring, Devlin goes for another moonsault but WALTER dodges and lands a shotgun dropkick that sends Devlin careening across the ring. WALTER follows with a huge powerbomb and pins but only gets two. WALTER lands another chop but Devlin fires up and lands a barrage of left and right hooks. They go back and forth until WALTER locks in a sleeper. WALTER sits back. Devlin flips over into a pin. WALTER kicks out. Devlin lands a big head-butt and goes for a suplex. WALTER counters with a suplex into a sleeper hold. Devlin fight hard and escapes with a double foot stomp to WALTER’s back. German suplex by Devlin, followed by a Brainbuster. One, two, no, WALTER kicks out. Diving moonsault connects. WALTER still kicks out. Devlin fires up again and the crowd gives him a standing ovation. 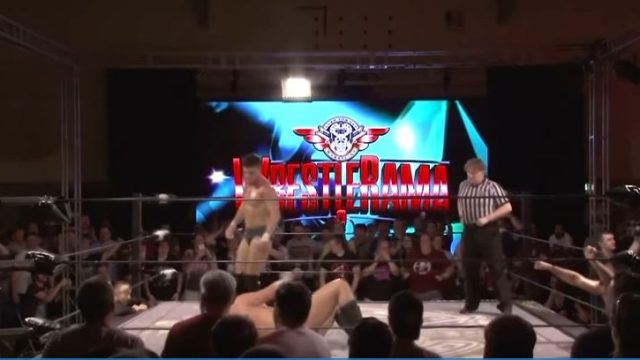 Devlin goes for a package piledriver but WALTER powers out. WALTER rolls out of a second attempt but eats a Shining Wizard for his efforts. Devlin jumps onto WALTER’s back with his own sleeper but WALTER escapes by climbing the turnbuckles and falling backwards. WALTER lands another big chop followed by a short-range lariat and then signals the end. He goes for the powerbomb, but Devlin counters with a Manami Roll. Devlin counters a powerbomb with a powerbomb. Amazing counter. One, two, thr—no, WALTER kicks out. WALTER gets up first and lands more big chops, only for Devlin to duck one and land a big head-butt. He follows that with a running PK kick and rolls into a European clutch for a pin. Bad idea. WALTER counters into a rear naked choke. Devlin tries to escape so WALTER clubs the hell out of his chest and locks it in deeper. Devlin’s arm falls one…twice…thr—no, Devlin still has fight in him. WALTER flips him over. Sitout Tombstone Piledriver. One, two, three! WALTER wins! The fans are stunned silent!

Post-match, WALTER is showered with boos and middle fingers as he celebrates. Many fans appear to be genuinely angry at WALTER’s win. But he parades around the ring all the same, rubbing salt in the wound.

That was a fun match. As expected these two wrestlers worked the David vs. Goliath dynamic perfectly. Devlin did anything and everything he could to try and beat WALTER. He avoided WALTER’s dangerous chops whenever possible. He landed many last-second counters to surprise WALTER and break through his guard. He got near-fall after near-fall and gradually started making viewers believe that he stood a chance. Then WALTER pummeled him…not into oblivion but into reality. WALTER did so little in this match but it was enough to shatter everyone’s dreams and make some of them legitimately angry. It was as if Vince McMahon himself booked this match just to rile up the crowd.

It was a tale of two wrestlers here. Devlin was your typical modern indy guy that did anything and everything. He showed that he could be the jack of all trades by doing whatever he could to try and beat WALTER, even if it was particularly high-risk or nonsensical. He did everything from dives, to submission holds, to trying out-strike WALTER, to even trying some power moves. He moved like a weasel trying to take down a much larger foe. But it wasn’t enough. While Devlin had his smarts, strategy, athleticism, and daredevilry, WALTER had his simplicity and his brutality. For every five moves Devlin hit, WALTER hit one and did as much damage. WALTER had Devlin scouted and had an answer for everything he did. He was so awesome at dashing Devlin’s and his fans’ hopes. And he showed that doing the simpler things was more efficient than being a showman. Devlin thought he’d make another comeback by escaping WALTER’s sleeper hold so WALTER simply flipped him over and spiked him on his head when he was at his weakest to stop that idea from becoming a reality.

But the match was far from flawless. Devlin on offense was a bit bland despite the wild crowd reaction he was getting. He had nothing truly unique about him and the way he wrestled; he was so similar to so many other smaller indy guys that’ve come and gone over the past decade. At least WALTER was unique in his appearance and style. Plus, Devlin hit some weak-looking moves that WALTER had no business selling. Some spots look a bit awkward and slightly off. Considering that this wasn’t Devlin’s first match with WALTER, I had higher expectations of him. He should’ve known better and fought more strategically. If he knew that WALTER’s strikes were so lethal, why didn’t he try and attack that arm? Why did he just land some generic indy moves that every small guy does instead of coming up with a game plan? Considering the stakes here, it was a bit underwhelming for Devlin to miss on a golden opportunity to actually weaken WALTER in a meaningful way instead of just throwing random stuff at him haphazardly, hoping for something to stick.

This match is solid but mainly because WALTER’s in it. He’s one of those guys whose style doesn’t get old no matter how simplistic it is. He isn’t a flashy wrestler that likes to show off and treats the wrestling ring like it’s a playground or a trampoline. WALTER’s personal motto and philosophy has long been ‘the mat is sacred’ and it shows in how he wrestles. This was just another example of that. WALTER took a guy who probably saw the ring as his trampoline and beat him to a pulp. Devlin tried everything he could to become a victorious underdog but WALTER was simply better.

So for everyone thinking that WALTER/Gunther has simply become great in the past two years, you should know that he’s been great for much longer than that.