Although his fabled Streak was incredible, it didn’t always include great matches. Undertaker didn’t really have tremendous matches until he started what I call his WrestleMania SUB-Streak. That sub-streak of great matches began at WrestleMania 23 when he and Batista stole the show in a great 16-minute war. From there it included a slightly better (albeit disappointing) main-event bout with Edge, which was then followed by two of the best Undertaker matches ever against Shawn Michaels in 2009 and 2010. This sub-streak continued with a brutal war with Triple H in 2011, and then a HIAC match that was, in my opinion, overrated in 2012. The sub-streak ended here with another show-stealing performance and was perhaps the last truly great match in The Undertaker’s legendary career.

Today we look back at the match between Undertaker and CM Punk from WrestleMania XXIX.

After losing his WWE Championship to The Rock at the 2013 Royal Rumble and then losing a #1 contender’s match to John Cena a month later, Punk decided to blame the fans for his own failures. It was a stupid cliché and things only got worse from there. Punk vowed to take something away from the fans, that thing being the Undertaker’s Streak. To achieve this goal, Punk beat Sheamus, Big Show, and Randy Orton to earn the right to face the Undertaker at WrestleMania XXIX.

From there, things took a darker turn. William Moody, a.k.a. Paul Bearer, died the following night. And just as WWE had done before with people like Eddy Guerrero, a person’s real death was incorporated into a storyline to promote an upcoming show. Punk and his manager Paul Heyman mocked Bearer’s death in several skits. Heyman dressed up as Bearer, complete with make-up and histrionic voice. Punk played with the urn (which was interpreted as containing Bearer’s ashes) like a toy and even dropped it carelessly. And on the final show before WrestleMania, Punk attacked Undertaker and then poured ashes all over him.

On one hand, it was incredibly effective at getting people to hate Punk and want to see Undertaker kick his ass. On the other hand, it was incredibly tasteless. It was pure ‘cheap heat’ and another example of WWE taking the easy route to get any attention, good or bad. They could’ve built this as a purely professional feud with Punk wanting to prove he was the best in the world by beating the best performer in WrestleMania history. 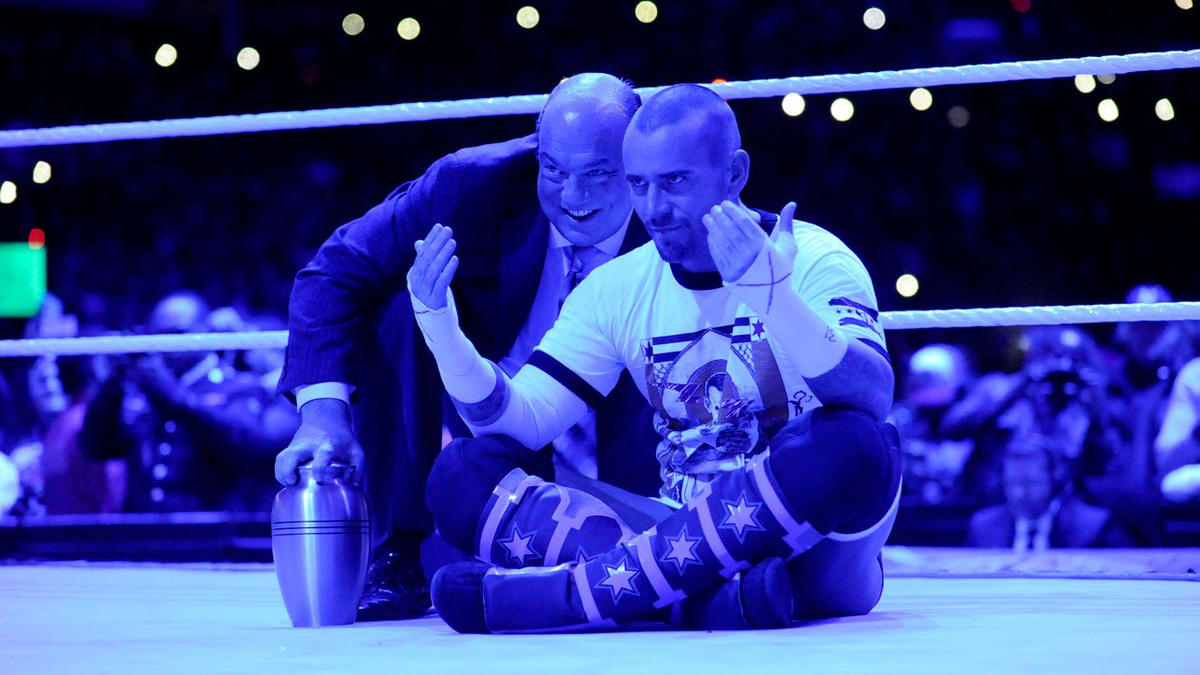 This match originally took place on April 7th, 2013 at WrestleMania 29 (on the same night as this mythical classic). This contest was rated ****1/2 out of five by the Wrestling Observer’s Dave Meltzer and TJRWrestling’s John Canton also rated it ****1/2 out of five. Let’s see how well it holds up now.

Punk goads ‘Taker into a corner and fires off a huge bitchslap. He escapes the ring and then re-enters it, playing cat and mouse with the Deadman. Punk hits corner chops and forearms and is forced to back off which lweads to Undertaker choke-tossing him into that same corner. But before Undertaker can wreck him with punches, Punk ducks and slaps him again. ‘Taker goes for a chokeslam. Punk blocks and lands some kicks. He charges but runs into a big boot. ‘Taker tosses him to the floor, hits some punches and throws him over the barricade. The referee doesn’t count for some reason as ‘Taker starts dismantling one of the announce tables and then drives Punk back-first into the ringpost. He ignored the referee’s empty threats and lands his classic apron leg drop. 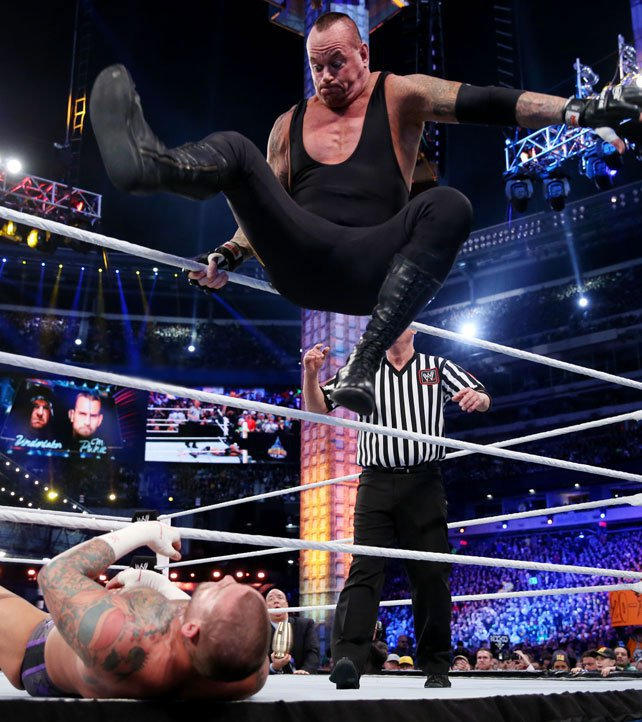 Back in the ring, Undertaker lands more corner punches and starts working Punk’s arm. He goes for Old School but Punk hits a deep arm drag first. Then Punk mocks ‘Taker big time and lands an Old School of his own. He follows with a Russian leg sweep and pins but only gets two so he applies a modified armlock. As this is going on, Paul Heyman screams ‘where’s Paul Bearer now?’ and holds the urn up in blatant mockery. Undertaker responds by powering Punk into a corner and landing more punches. Punk gets launched into the opposite corner but still manages to dodge a corner charge. ‘Taker ends up sitting on the apron but Punk dropkicks him from behind and goes to the top rope. Diving ax handle to the floor.

Back in the ring, Punk lands a neckbreaker and pins for two. He lands some Undertaker-style shoulder thrusts but Taker hits back with punches until Punk counters with an armtrap swinging neckbreaker for another two-count. Punk applies a chinlock as the dueling ‘Undertaker/CM Punk’ chants continue. ‘Taker elbows out and lands a snap suplex. He charges into a corner but Punk boots him and takes his arm again. He goes for Old School again but loses his balance and crotches himself. Undertaker punches Punk to the floor and then winds up. He goes for the suicide dive – no, Heyman jumps onto the apron. ‘Taker goes to chokeslam Heyman but changes his mind and turns around, only to eat a diving clothesline from Punk. One, two, Undertaker kicks out.

Punk hits a corner kneelift followed by a short-range clothesline. Then he goes to the top rope and soaks in the crowd. Diving elbow drop. Undertaker kicks out again. Punk continues mocking ‘Taker by motioning to the urn and then teases the GTS. He lifts Undertaker up. Undertaker escapes and hits a massive chokeslam. One, two, Punk kicks out. They brawl to their feet. Undertaker wins the strike exchange and hits a corner clothesline. Undertaker hits snake eyes. But his follow-up combo is broken by a heel kick from Punk. ‘Taker kicks out of another pin and then gets clotheslined to the floor. More ringside brawling. Undertaker goes for a Last Ride onto the announce table. Punk escapes and lands another high kick. Then Punk goes to the top rope and channels Randy Savage. Diving elbow drop. The announce table doesn’t break. F**k, what a painful landing. 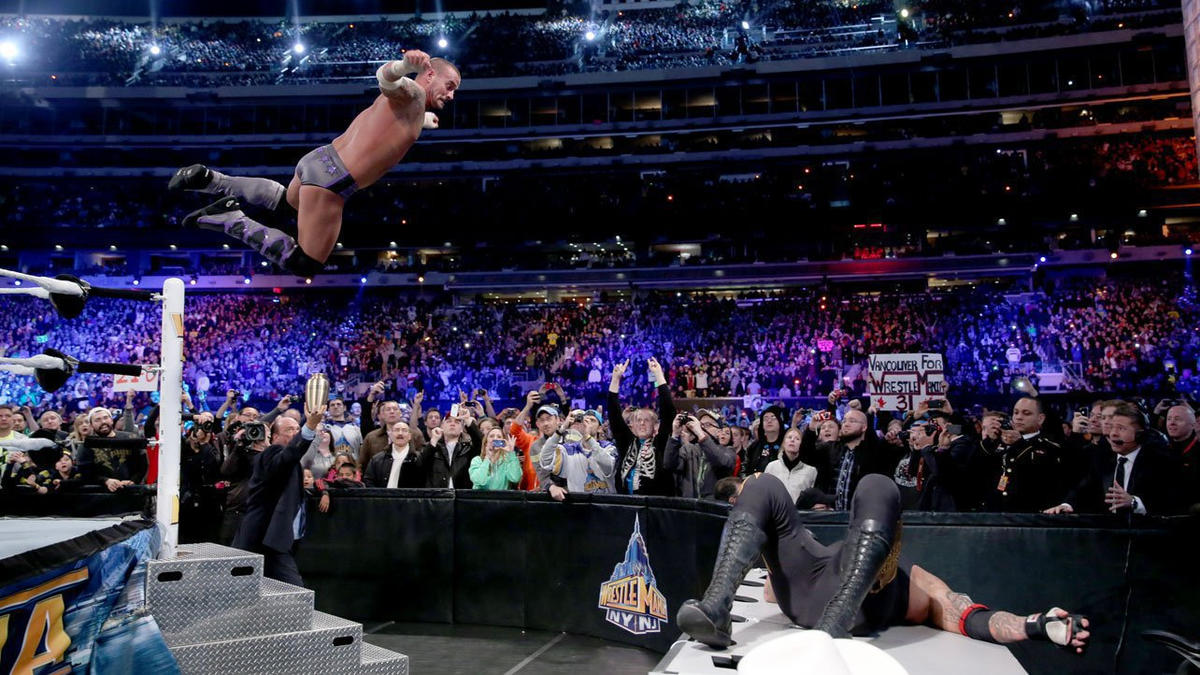 The ref stats counting and Punk makes it into the ring. He gets to 9.5 and Undertaker makes it in as well. With an injured knee off that dive, Punk crawls over to pin. Wait, no, Undertaker counters into the Hell’s Gate submission hold. Punk flips over into a jackknife cover. One, two, Undertaker kicks out again. Anaconda Vice. The ref sees ‘Taker’s shoulders on the mat and pins. One, two, no, Undertaker sits up and stares daggers at Punk. The look on Punk’s face is priceless. 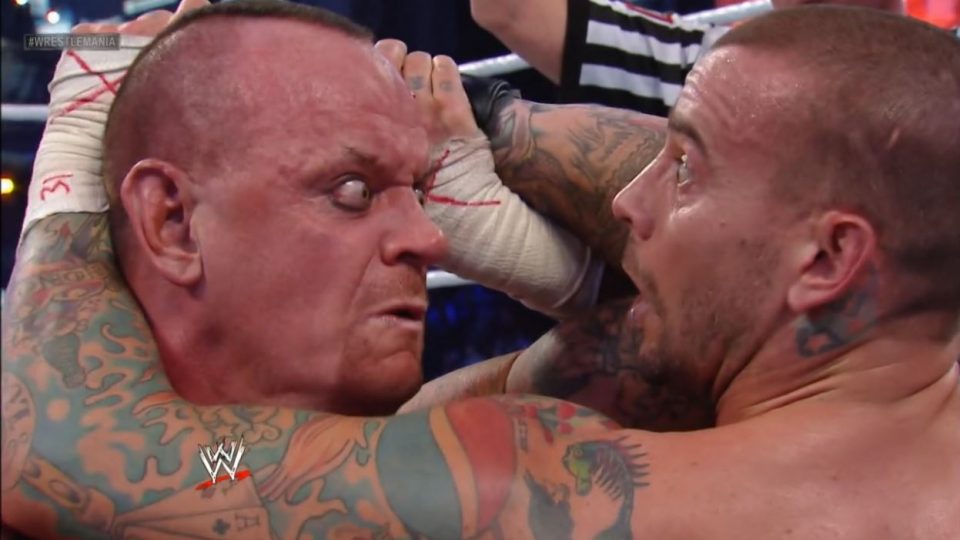 Undertaker powers up like a true supernatural monster and goes for a chokeslam. Punk escapes and hits a Go To Sleep. Undertaker bounces off the ropes and lands a Tombstone Piledriver and pins. One, two, and – no, Punk kicks out.

Both wrestlers brawl to their feet. Undertaker wins the exchange and sends Punk into the ropes. Punk kicks him to block a back body drop but Undertaker no-sells. Punk pushes the referee down and Heyman gets on the apron again. That distraction allows Punk to his a spinkick to the gut but he goes down due to the pain in his leg. Undeterred, he lands another corner kneelift. But Undertaker counters and goes for The Last Ride. Heyman hands Punk the urn and Punk whacks ‘Taker with it. Punk does Undertaker’s ‘rest in peace’ pin. One, two, and th – NO, Undertaker kicks out again. Punk does the throat slash gesture and tries another GTS. Undertaker elbows out and tries a Tombstone. Punk escapes and tries the GTS again. Undertaker flips him over. Tombstone Piledriver connects! One, two, and three! Undertaker is 21-0!

Winner after 22:07: The Undertaker

If there’s one wrestler that really has a winning match formula, it’s the Undertaker. For over twenty years he has played the role of supernatural monster that takes inhuman amounts of punishment and still wins in the end. That formula was on full display here and the crowd absolutely loved it. It’s hard to argue with them; even now this remains one of the best matches in modern WrestleMania history.

Undertaker was naturally limited because of his age so Punk had to do most of the heavy lifting. And Punk, being an amazing heel, did exactly that and then some. He was perfect in his role as ‘Taker’s foil. He came at ‘Taker from different angles and tried different strategies to keep Undertaker from pushing forward. Punk tried cheating, mockery, going strike-for-strike, surprise dives, using his manager, hitting the referee, and more, all to try and pin the Undertaker. But in the end it didn’t work. Punk the arrogant a**hole was humbled by his veteran opponent. All his obnoxiousness blew up in his face as Undertaker kept going and going until there was nothing left. And when the Undertaker spiked him with that final Tombstone, it was just so satisfying. All of Punk and Heyman’s trash-talk and dastardly actions from the weeks leading up to the match ended up being for nothing as Punk was beaten and the heroic Undertaker avenged his former manager and departed friend.

Because of Undertaker’s limitations and Punk being injured, Punk had to veer a bit into exaggeration territory. He was clearly being over-the-top with his mockery, but that only fueled the fans’ desire to see him get his ass kicked. He did exactly what Bubba Ray Dudley said is the crux of pro-wrestling: he struck an emotional chord to sell a ticket. Was Punk’s strategy unrealistic and a bit silly given the situation he was in? Sure. But that helped the match’s story flow properly. Punk was so overconfident because he had so many tricks up his sleeve. It was ok for him to be arrogant early on because he still had tricks up his sleeve. But as the match wore on and Undertaker kept kicking out, Punk’s arrogance shifted to desperation. He tried counter after counter, trick after trick. None of it worked. Even as he fought through what looked like a real knee injury, he tried to use whatever tool was at his disposal to win. But in the end, none of it worked. Punk came closer than anyone not named Shawn Michaels to winning, but it still wasn’t enough. 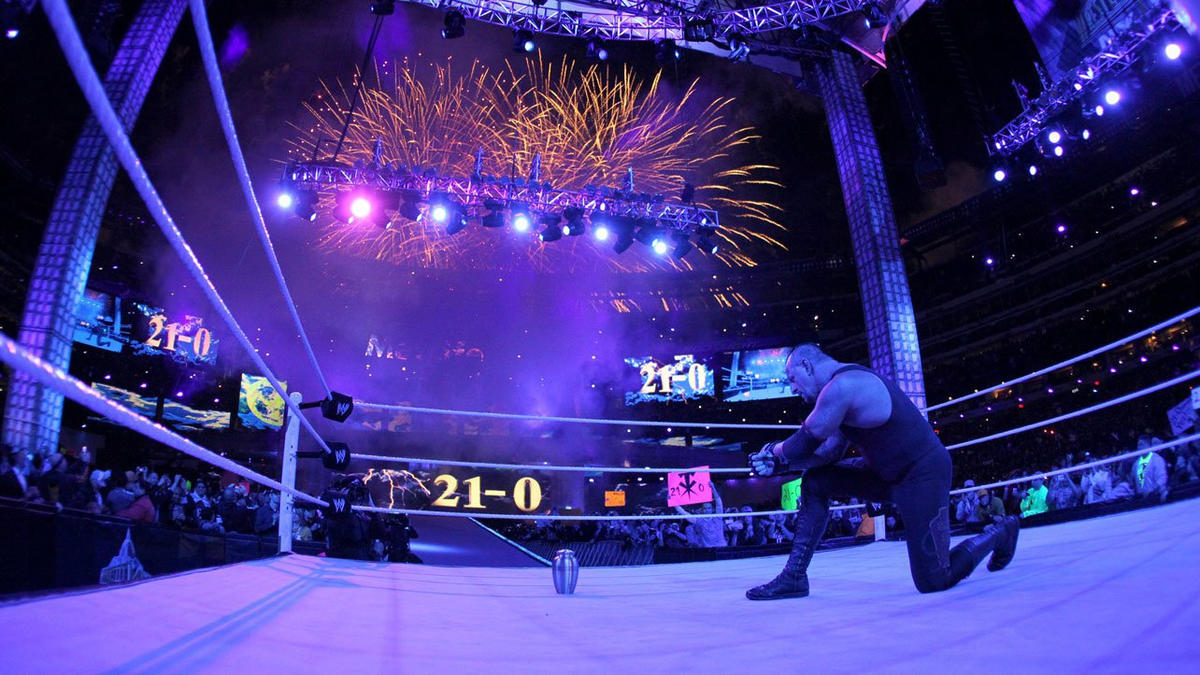 This was a refreshing change of pace from the previous few Undertaker WrestleMania matches. Those matches were so straight-laced and ‘pure’ compared to this one. This was a more overtly story-oriented match, a simplified good vs. evil encounter. Punk earned praise for what he did here. People were going to cheer Undertaker no matter what; he’s the Undertaker for God’s sake. But it took an exceptional level of talent to get people to hate him so much that they’d pay to see him get his ass kicked.

Could the match have been better? A bit, yes. Heyman’s involvement was a bit unnecessary and lacking in conclusion while the ref bump was a bad joke. Plus, even though Punk was great at getting under Undertaker’s skin, he still suffered from a marked lack in credibility. The match was less ‘will Punk actually win’ and more ‘how long until Undertaker tears Punk’s head off’. And while the latter isn’t necessarily bad, the match would’ve been much better if Punk did more to convince viewers that he had a chance of winning instead of doing so much showboating and mockery.