The Royal Rumble match was devised by Pat Patterson and aired for the first time as a television special on the USA Network back in 1988.

The first “big four” premium live event of the calendar year, the Royal Rumble is a highlight of the year. As a result, many of the 30 Man-Royal Rumble bouts are classic encounters that are still fondly recalled by fans.

This feature looks back on the five greatest Royal Rumble matches of all time. 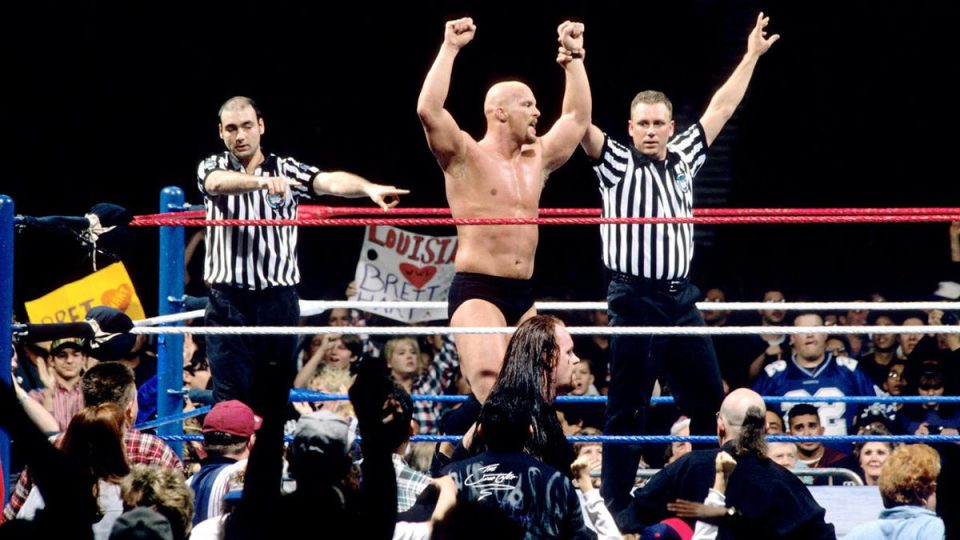 The 10th annual Royal Rumble match was a superb bout. The WWF had problems filling out the match due to the lack of depth in its talent roster at the time. As a result, a deal was made with Mexican promotion, AAA to borrow some of its stars such as Mil Mascaras and The Latin Lover to compete in the Rumble.

The match is best remembered for being the first of three Rumble victories for Stone Cold Steve Austin. ‘The Rattlesnake’ entered at number five and ejected a mammoth 10 participants to win the contest.

Austin’s aggressiveness and energy kept the match moving and ensured it never sagged. Stone Cold was actually eliminated by Bret ‘Hitman’ Hart but the officials didn’t see it as they were breaking up a ringside brawl between Mankind and Terry Funk. Whilst the referees were distracted, Austin snuck back in and eliminated Vader, The Undertaker and Hart to win the match.

Due to the controversial finish, a four way bout was arranged for the next event, Final Four: In Your House, to name the number one contender. When WWF Champion, Shawn Michaels vacated the WWF Title due to injury, that contest was made a WWF Championship bout, which was won by Hart (which was only fair).

A 45 minute thriller packed full of memorable moments and an excellent performance from Stone Cold, make the 1997 ‘Rumble one of the best ever. 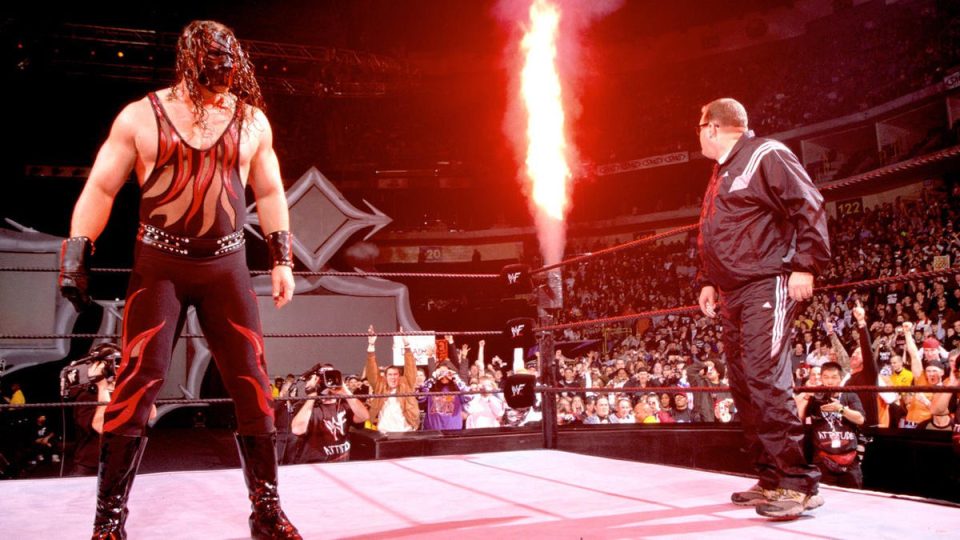 The 2001 Royal Rumble match had a little bit of everything. The Hardyz gave us the first glimpse of brother versus brother in the early going. Comedian Drew Carey entered the bout at number five before he (voluntarily) exited the match after Kane entered at six.

The contest featured a hardcore section as the company’s hardcore division introduced weapons to the bout in a nutty passage. The Honky Tonk Man treated fans to a musical interlude before the ‘Big Red Machine’ decimated “The Greatest Intercontinental Champion of all Time” and sent him packing.

Down the home straight, Stone Cold Steve Austin was assaulted on his way to the ring by Triple H. After taking a battering, a bloody Stone Cold finally entered the match as the number 30 participant, Rikishi entered the fray.

In a memorable sequence, Austin eliminated The Rock, then Kane to win the bout and a record third Rumble match. ‘The Rattlesnake’ would upend The Rock at WrestleMania X-7 to complete his fairy-tale comeback from spinal surgery.

Celebrity guests, surprise entrants and non-stop action, the 2001 Royal Rumble match is one that lives long in the memory. 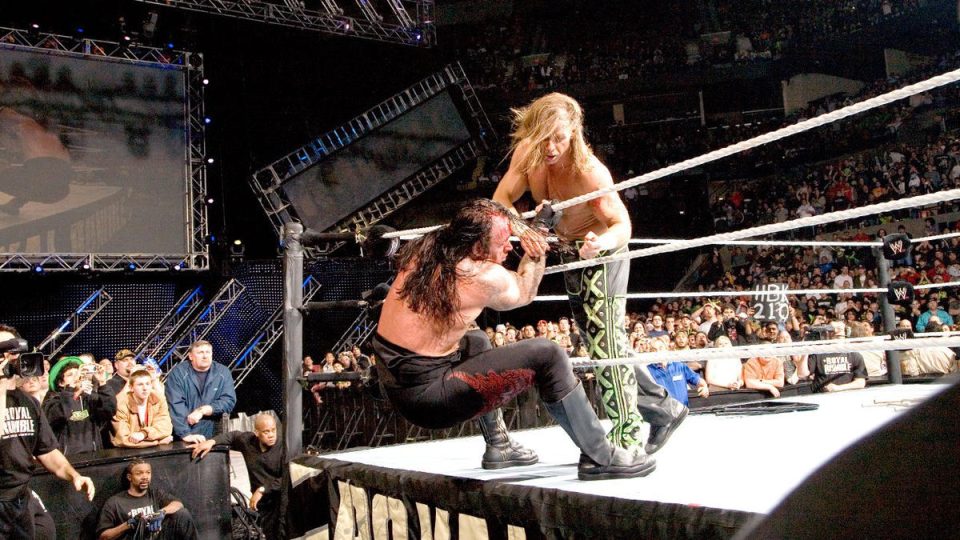 The contest began with memorable exchanges between veterans, Ric Flair and Finlay before The Nature Boy was ejected by Edge.

Shawn Michaels eliminated both members of Rated RKO with whom he had been feuding and looked set to win a record-tying third Royal Rumble match-up. However, in a phenomenal 7-minute exchange, the final two participants, Michaels and The Undertaker engaged in a spirited mini-match to close the ‘Rumble.

After dramatic exchanges, ‘Taker finally ejected ‘The Showstopper’ to win his first Rumble match and earn the distinction of becoming the first wrestler to win the Royal Rumble match from the number 30 spot.

With a well-remembered opening and closing stretch, and packed full of star power, the 2007 Royal Rumble match is one of the greatest in the event’s 35-year history. 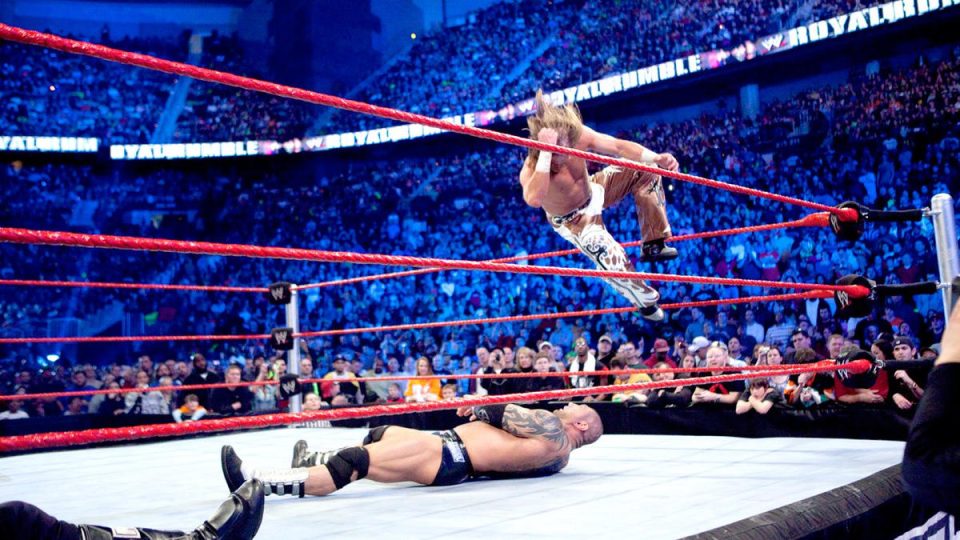 The 2010 Royal Rumble was an extremely memorable affair packed full of star power. Triple H, Shawn Michaels, Batista, John Cena, Edge, Kane, Randy Orton and Chris Jericho were just some of the huge names battling it out for a headline spot at WrestleMania.

CM Punk dominated the early going, eliminating five participants and cutting a promo each time he cleared the ring in a hugely entertaining spell. His dominance was eventually ended by Triple H who ejected him. Beth Phoenix became only the second woman in history to compete in the Rumble and in a famous spot eliminated The Great Khali.

The main story thread of the bout was Shawn Michaels’ quest to win the bout so he could challenge then-World Heavyweight Champion, The Undertaker at WrestleMania to atone for his defeat to the ‘Deadman’ at WrestleMania 25. So desperate was Michaels, he even betrayed and eliminated his D-X buddy, Triple H from the contest with a Super Kick. Michaels lasted 23 minutes and ejected six wrestlers from the match but was eliminated by Batista in a dramatic moment.

Edge was a surprise entrant at number 29 as he had been sidelined by injury since the previous summer. He last eliminated Cena to win the bout and earn a World Title match at WrestleMania.

Full of drama, excellent storytelling and packed full of memorable moments, the 2010 Royal Rumble is a stunning match and one of the finest Rumbles in history. 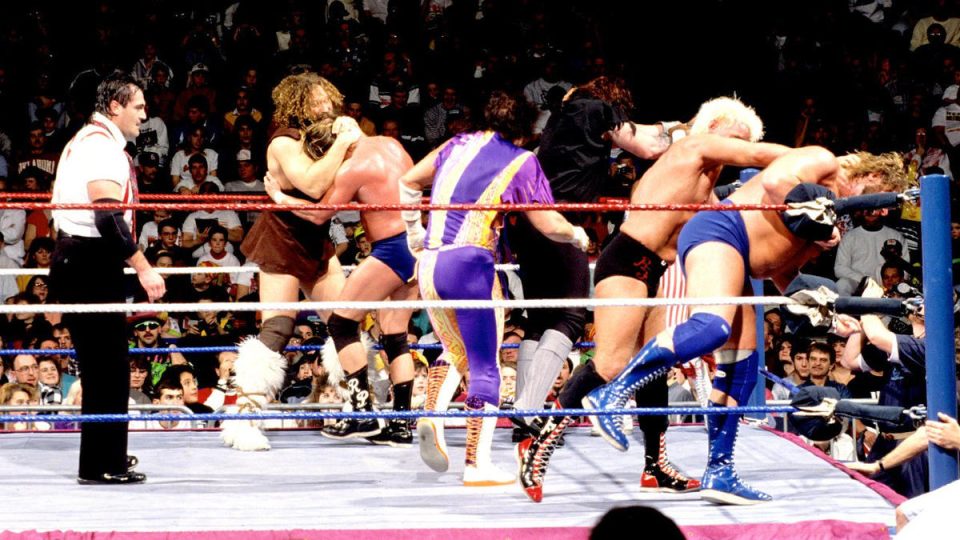 The 1992 Rumble was also the first Royal Rumble bout that had a prize for winning it. The vacant WWF Championship was on the line, which added an extra layer of urgency to the contest. For all subsequent ‘Rumbles a headline spot at WrestleMania would be at stake.

The outcome was in doubt until the very end of the match with the final four men in the ring all headline acts; Flair, Hogan, Savage and Sid. After the ‘Macho Man’ was ejected, Sid dumped out ‘The Hulkster.’ An enraged Hogan, ever the bad sport, then assisted Flair to eliminate Sid.

With that victory, former NWA mainstay Flair won his first WWF World Title and would defend the crown against Savage at WrestleMania VIII. Hogan and Sid, still at odds over the ending of the Rumble would collide in the ‘Mania headliner to settle their feud.

With constant action, excellent storytelling, a historic result and the foresight to set up the main event of WrestleMania VIII, the 1992 Royal Rumble match has yet to be bettered in the three decades since.

You can watch every single Royal Rumble pay-per-view exclusively on the WWE Network.