Starrcade was the flagship pay-per-view of Jim Crockett Promotions and later WCW from 1983 to 2000. Pre-dating WWE’s WrestleMania by two years, Starrcade played host to many thrilling and incredibly violent collisions.

It had a storied history no doubt, with such flops as The Black Scorpion, Battlebowl, the entirety of Starrcade 1999, and the unsatisfactory conclusion to the headliner of Starrcade 1997 between Hollywood Hulk Hogan and Sting. However, the event also presented some thrilling encounters. This feature runs down the finest 10 bouts ever held at WCW’s premier super-show. 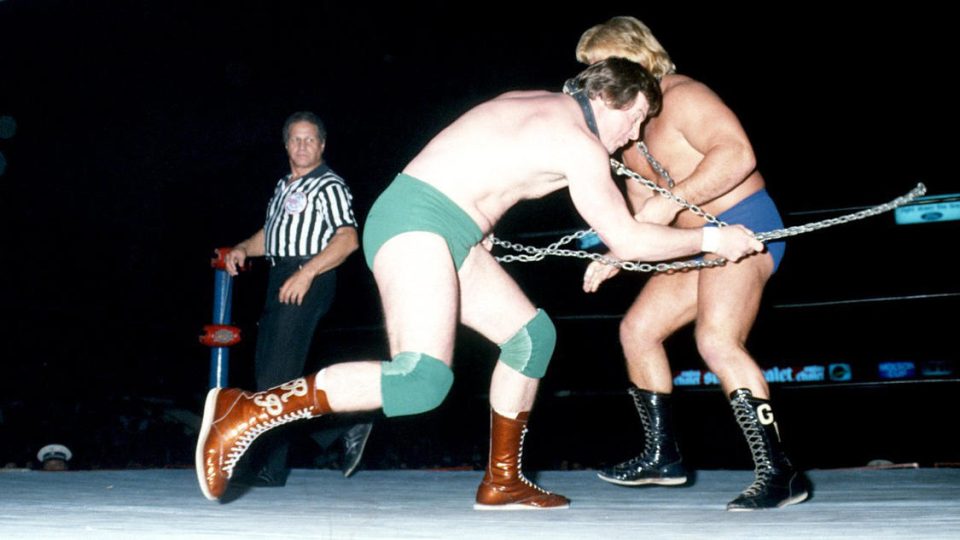 Starrcade 1983 may have been sold on the headliner pitting NWA World Champion Harley Race versus Ric Flair but on the undercard was another brilliantly promoted match.

That was the Dog Collar contest between ‘Rowdy’ Roddy Piper and Greg ‘The Hammer’ Valentine.

The match revolved around the use of the chain that bound each participant together by the neck. They repeatedly found creative ways to use the chain as a weapon, which inevitably led to lots of bloodshed.

Piper finally earned the pin after laying in brutal shots on Valentine with the chain. Probably, Piper’s finest ever match. 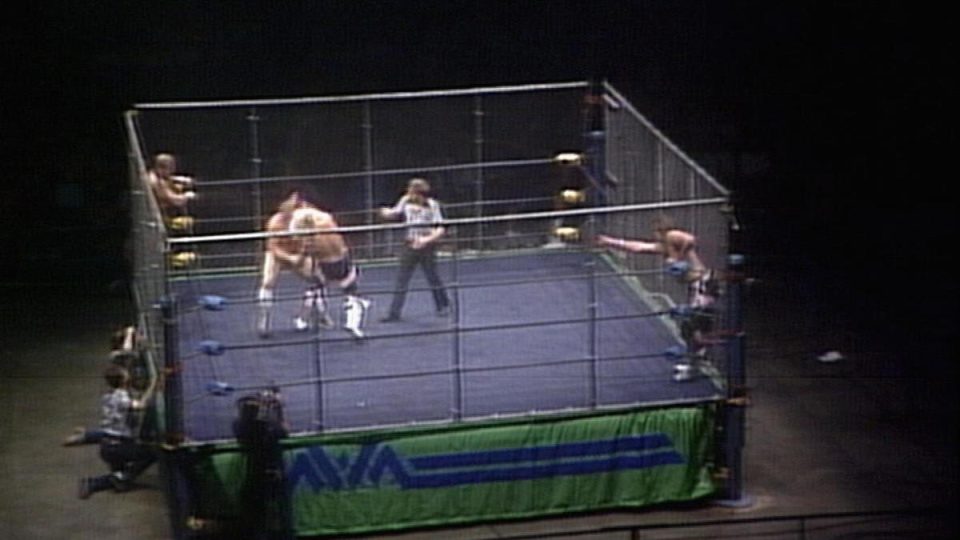 Starrcade 1986 was an overloaded card replete with gimmick matches. Many of these did not land such as the Skywalkers Scaffold bout and the brief Hair versus Hair contest. However, the Cage Match pitting NWA Tag Team Champions, The Rock n Roll Express against Arn and Ole Anderson was the show’s lone highlight.

In a 20-minute thriller, the match stuck to the traditional Rock n Roll Express formula, where Ricky Morton played the face in peril for an extended period before Robert Gibson got the hot tag.

The live crowd were on their feet throughout as the dastardly Andersons used every trick in the book to maintain the upper hand and the resilient babyfaces had to dig deep to stay in the match.

The hot home stretch saw some nail biting near falls before Ole attempted a slam on Morton and Gibson dropkicked both of them over. Morton landed on top of Ole for the three-count allowing the Rock n Roll Express to retain their titles. 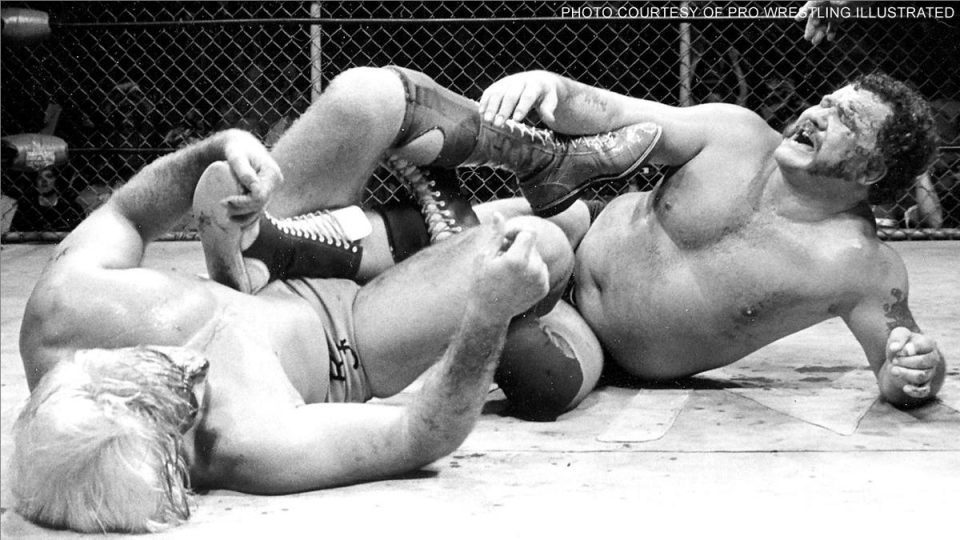 The inaugural Starrcade event was headlined by a bloody, brutal Cage Match between NWA World Champion, Harley Race and his challenger, Ric Flair.

Psychologically sound; Race continually worked over ‘The Nature Boy’ to make him vulnerable to the Piledriver. The match ended when Flair atypically nailed a flying body press off the top rope to earn his second NWA World Championship.

Tremendous storytelling, pacing, and excellent action. A true classic of the era. 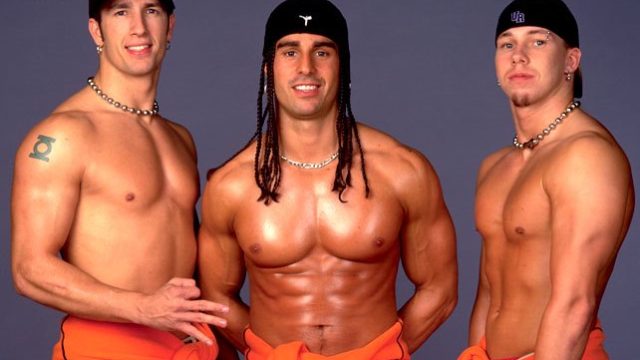 There was very little to celebrate in the dying days of WCW. However, there was a new breed of exceptional, young, athletic talent that lit up the undercard in the final months of the company’s existence.

Perhaps the best example was the three-way tag team bout between 3 Count, The Jung Dragons, and Jamie Noble and Evan Karagias.

Starrcade 2000 played host to a three-way tag team Ladder Match with a title opportunity at the Cruiserweight Championship. Quite why a singles title opportunity was at stake in a tag team contest is WCW booking in a nutshell. However, thanks to the efforts of the talent involved, the questionable match stipulation was forgotten.

The six men thrilled the live crowd for 15 minutes of non-stop action, with innovative spots and breathtaking aerial action. Every bit as good as the WWF’s TLC matches from the same era. Both members of 3 Count pulled the contract down at the same time to both win the match and earn a title bout. 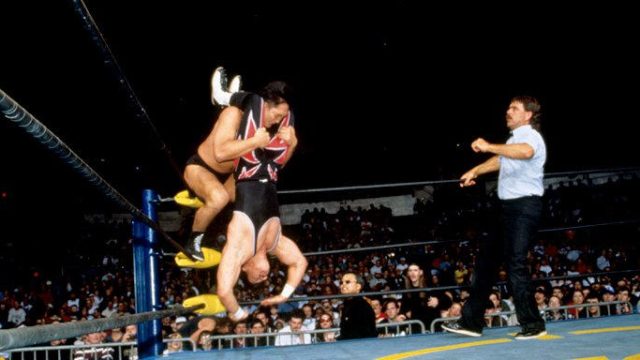 Starrcade 1995 played host to the World Cup of Wrestling as New Japan wrestlers invaded WCW. It was a nice idea in theory but was a complete flop at the box office. WCW fans were not familiar with the Japanese stars and thus had little reason to care.

However, one of the WCW vs New Japan matches pitted Eddy Guerrero against Shinjiro Ohtani. The Nashville crowd were on their feet for this contest, such was the sheer awesomeness of the action.

Filled with logical, excellent mat wrestling mixed in with beautiful aerials and cutting-edge offence, this was a phenomenal encounter. The home stretch saw a brilliant series of near falls reversals which culminated in Ohtani holding Guerrero down for the pin.

Terrific match from start to finish. 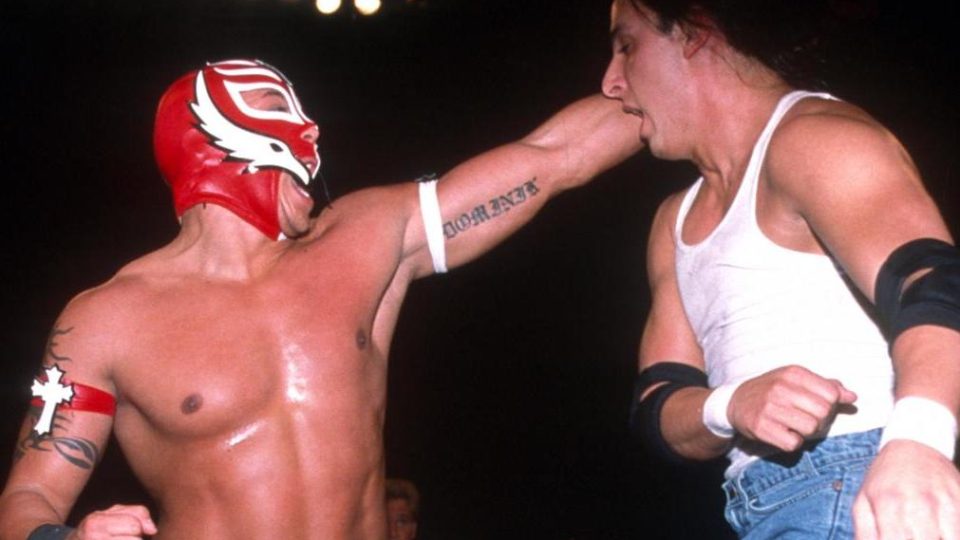 While the nWo storyline dominated the main event positions in WCW from 1996-1998, the Cruiserweights were lighting up the undercard in thrilling, innovative, high-flying battles.

One such classic took place at the 1998 Starrcade event which pitted Rey Misterio Jr. against Billy Kidman and Juventud Guerrera.

Their Triple Threat match for the Cruiserweight Title opened the show and lit up the show. Packed full of big moves and incredible reversals, the action never slowed for the entirety of its 15-minute duration.

Kidman reversed a sunset flip to pin Guerrera to retain the gold. A stunning contest, which served to highlight how exciting WCW’s Cruiserweight division was at its peak between 1996-1998. 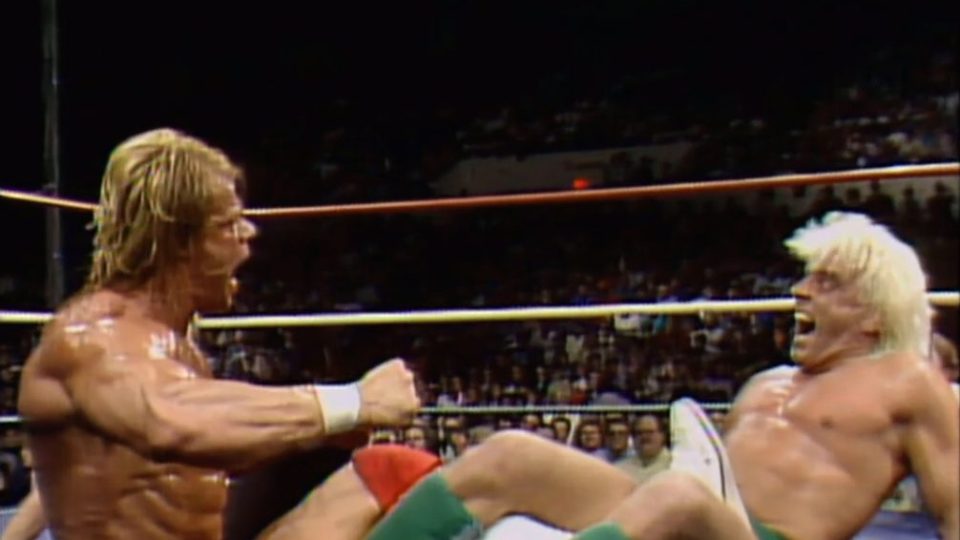 Ric Flair and Lex Luger had a lengthy feud in 1988 and the vast majority of their contests were thrilling collisions. Not least, their 31-minute stunner which headlined the 1988 Starrcade.

Luger had been a member of the Four Horsemen earlier in the year but had been kicked to the kerb by Ric Flair and his fellow Horsemen after Luger’s pal, Barry Windham turned on him and took his place in the group.

The heat was off the charts in their bout as the powerful Luger dominated the NWA World Champion. The cerebral Flair worked over Luger’s leg to take away his vertical base. The finish came when Luger’s leg buckled whilst attempting the Torture Rack. This enabled ‘The Nature Boy’ to roll him up for the pin to retain the gold. 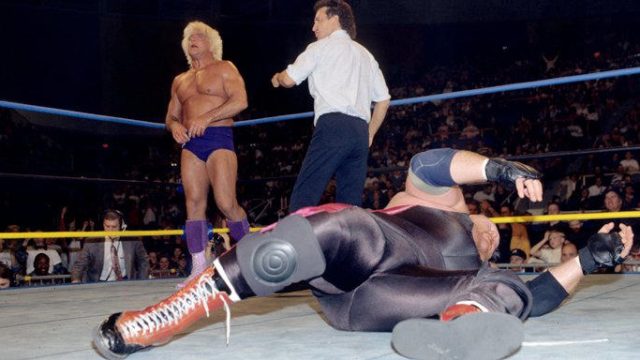 The tenth annual Starrcade headliner pitted Vader’s WCW World Title against Ric Flair’s career. If Flair lost he would have been forced to retire.

The 44-year-old Flair put in one of the final great performances of his Hall of Fame career in a 21-minute stunner that ebbed and flowed throughout.

Flair, in front of his hometown crowd in Charlotte, North Carolina pinned Vader to claim the World crown in a highly emotional match-up.

Crammed full of logical storytelling, where the smaller Flair was frequently overmatched and overpowered by the monstrous Vader but used his guile and experience to overcome his opponent.

A bonafide classic and one of the highlights of both men’s careers. 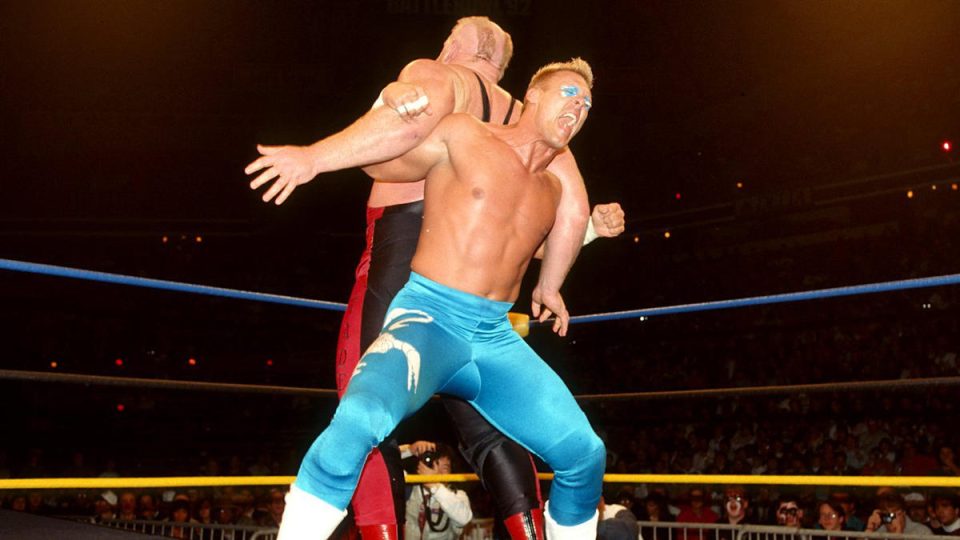 Sting and Big Van Vader were excellent bedfellows during their respective WCW careers. They consistently contested thrilling collisions which thrilled WCW fans every time they faced one another.

One of their more memorable bouts took place at Starrcade 1992 in the final of the King of Cable tournament final. In a 17-minute battle, Sting absorbed Vader’s stiff offence and waited for the opportunity to take the fight to the behemoth. ‘The Stinger’ upset Vader when he reversed a splash into a powerslam and pin.

Full of emotion and back and forth action, this match was a thriller and one of the finest contests of 1992. 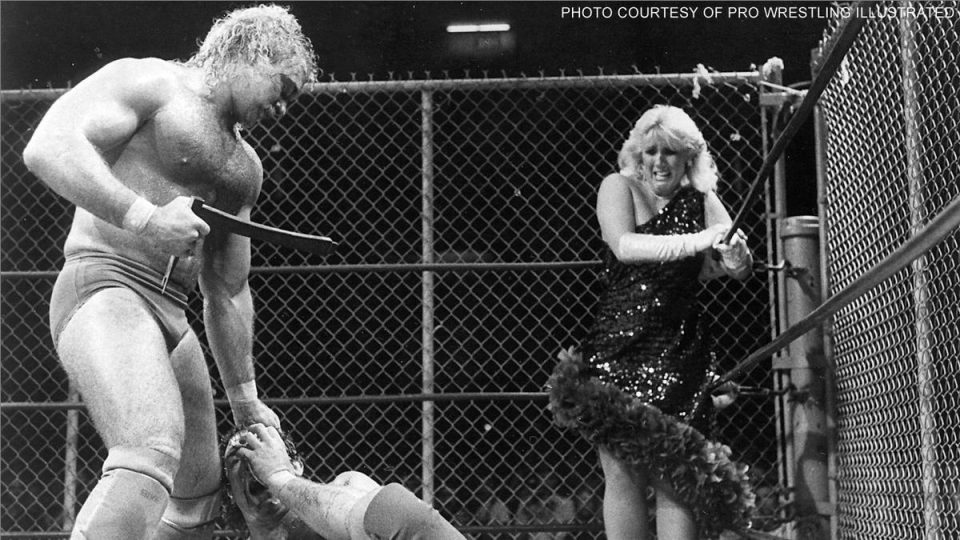 The greatest match in Starrcade history took place at the third event in 1985.

Magnum TA challenged Tully Blanchard for the United States Title in a bout that completely overshadowed the lacklustre headliner between Ric Flair and Dusty Rhodes.

The culmination of a lengthy, and super-heated feud, the pair fought in an I Quit Match inside a Steel Cage.

Extremely violent and bloody, full of intense brawling and stiff action. This match would satisfy the most bloodthirsty wrestling fan.

The violence intensified when a wooden chair was brought inside the cage and Blanchard smashes it and tried to stab Magnum with a sharp piece of wood. Magnum managed to disarm the champion and proceeded to stab in the forehead and eye repeatedly with the sharp wood splint. Blanchard (unsurprisingly) screamed that he quit.

Magnum was crowned the new US Champion in one of the most brutal matches in mainstream wrestling history. It was also one of the very greatest. Simply put, it’s the finest match in Starrcade history.

You can watch every Starrcade event exclusively on the WWE Network.